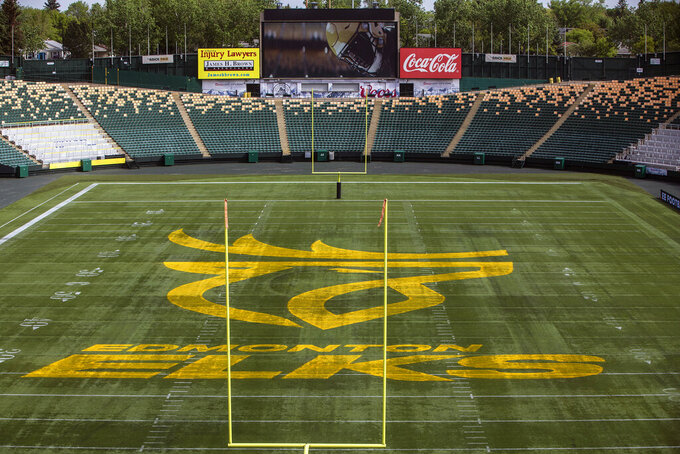 The club made the announcement on Tuesday.

It had been called the Edmonton Football Team up until the announcement, but its logo continued to feature two Es.

Elks was one of seven potential name changes the Edmonton Football Team provided on its shortlist. The others included: Evergreens, Evergolds, Eclipse, Elkhounds, Eagles and Elements.

When the Edmonton Football Team announced last year it was discontinuing the Eskimos name, president Chris Presson said it was the franchise’s hope to keep its double-E logo and green and gold colors.

The decision came following a review by the franchise after it twice opted to maintain its team name.

The Eskimos moniker has been tied to sports teams in Edmonton since the 19th century, but critics say the name is derogatory and a colonial-era term for Inuit.

In February 2020, the franchise announced it was keeping the name after a year-long research period that involved Inuit leaders and community members across Canada.

Then on July 8, the club promised to speed up another review of its name and provide an update by month’s end. In that statement, the Edmonton franchise noted “a lot has happened” since the decision in February.

One of the team’s sponsors, national car-and-home insurance provider Belairdirect, had announced it was rethinking its relationship with the team because of the name.

Others added they’d would welcome a review of the name.

This all happened as NFL’s Washington team had said it would undergo a thorough review of its name.

A similar announcement was made by Major League Baseball’s Cleveland team, which is switching its name.

The Edmonton name change comes in time for the resumption of CFL play.

The league has tentatively scheduled starting a 14-game 2021 season Aug. 5 after not playing in 2020 because of the COVID-19 pandemic.

There had been repeated calls in the past for the Edmonton team to change its name. In 2015, Canada’s national Inuit organization had said it was time for a change.

Founded in 1949, the Edmonton team has won the Grey Cup 14 times, second only to the Toronto Argonauts at 17.

The community-owned club’s impressive history on the field includes a record five consecutive Grey Cups from 1978 to 1982.

Edmonton qualified for the playoffs in 34 straight seasons from 1972 to 2005.