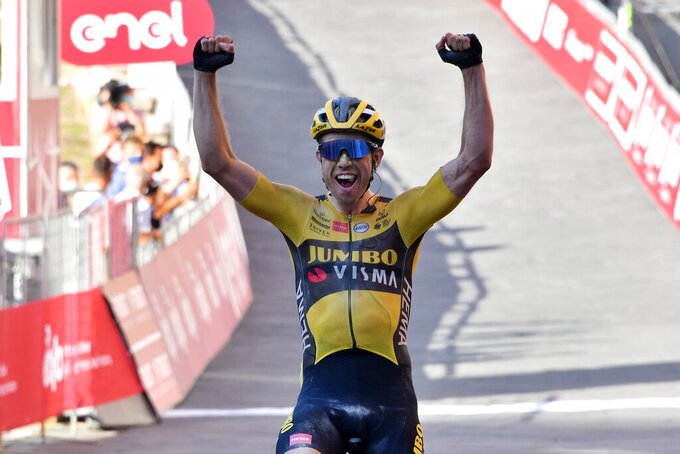 SIENA, Italy (AP) — Elite cycling and the UCI World Tour resumed Saturday with the Strade Bianche race in Tuscany following a five-month break due to the coronavirus.

Fans came out in large numbers along the characteristic gravel-road sections of the route although spectators were not allowed at the start or finish areas in Siena as part of social distancing measures.

Van Aert, a three-time cyclo-cross world champion with the Jumbo-Visma team, attacked on the final gravel section and completed the 184-kilometer (114-mile) route in just under five hours. He finished 30 seconds ahead of Davide Formolo of Italy and 32 seconds in front of Maximilian Schachmann of Germany.

“Over the last two editions of Strade Bianche, I gained a lot of confidence. It’s never easy to win and it was harder than usual in today’s circumstances,” said Van Aert, who finished third the last two years. “It makes the win even better. This is proof that I’m at the highest level now. To have won Strade Bianche at the age of only 25, with a cyclo-cross background, is a huge achievement.”

Van Vleuten, a three-time world champion with the Mitchelton-Scott team, defended her title in the 136-kilometer (85-mile) women’s race.

She finished 22 seconds ahead of Spanish rider Margarita Victoria García and 1:53 ahead of U.S. rider Leah Thomas.

The Strade Bianche was originally scheduled for March 7.

Several more big races, such as the Milan-San Remo and Il Lombardia single-day classics, plus the five-day Critérium du Dauphiné, are scheduled for this month.