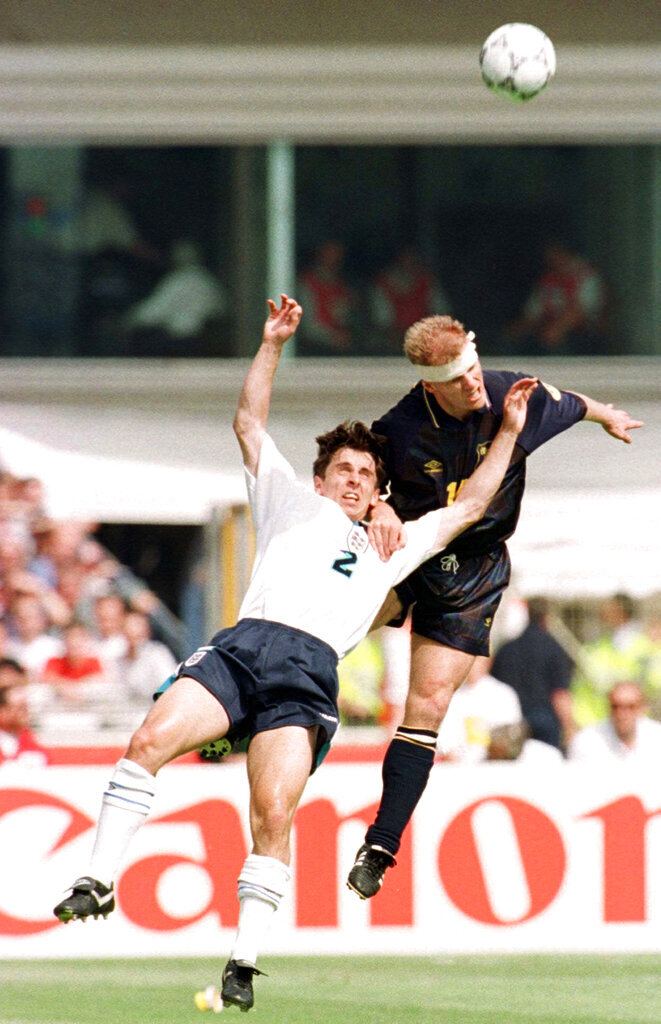 FILE - In this file photo dated Saturday June 15, 1996, Scotland's Gordan Durie, right, pulls back England's Gary Neville during their Group A soccer match at the European Soccer Championships at London's Wembley Stadium. The Scottish men last qualified for a European Championship in 1996 but didn’t advance from the group stage after losing to England at Wembley. (AP Photo/Lynne Sladky, FILE)

LONDON (AP) — Unimaginable now, especially with tickets in short supply during the coronavirus pandemic, but when England and Scotland first decided to play each other in a soccer match they weren't sure if there would be much demand.

“It was a big social success and a financial success," soccer historian Andy Mitchell said. "So that was the stepping stone that made them realize that there was a market for football and the potential for them for the game to grow.”

More than 2,000 spectators watched the 1-1 draw, generating a profit to fund travel for a return match in England and set international soccer's oldest rivalry in motion.

The 115th installment of the meeting of neighbors within Britain comes on Friday at the home of English soccer, Wembley Stadium — 149 years after the first.

“Historically, it's an incredibly important event,” Mitchell, the author of “First Elevens — the birth of international football," said by telephone. "It helped football as a game to develop because even at that time, there were two different styles. Scotland had the passing game, teamwork. England had their sort of dribbling, head down and run kind of game.

“It was quite apparent very soon that the teamwork and passing game was far superior to what the English were playing.”

That was clear within the first decade of encounters with Scotland enjoying five-goal victory margins of 7-2 and 6-1.

“So the Scottish style," Mitchell said, “was soon absorbed by the English game.”

Scotland having such an influence south of the border seems incongruous in the modern game.

A gulf between their domestic leagues has also grown over this century as the Premier League in England has cemented its status at the world’s richest league and the second-division Championship is even able to offer salaries comparable with — or exceeding — those on offer in the Scottish Premiership.

While 2018 World Cup semifinalist England opened Euro 2020 with a win over Croatia,Scotland lost to the Czech Republic on home soil in Glasgow in its first men's tournament game of the 21st century.

The Scottish men last qualified for a European Championship in 1996 but didn't advance from the group stage after losing to England at Wembley — a match memorable for the incredible goal scored by Paul Gascoigne. They haven't been back to a World Cup since 1998, missing out on five in a row.

“We are forever searching for a place on the world stage,” said West of Scotland Tartan Army group spokesman Hamish Husband, who will be going to his 28th match against England on Friday. “We live in the shadow of England. So our job is just to prick the bubble.”

Husband said he has only missed three of the derbies since his first in 1966 — the same year England won its only major title at the World Cup.

One of the most cherished Scottish victories came in 1967 when the northerners came to Wembley, won 3-2 and declared themselves unofficial champions of the world. That was a time when England and Scotland played at least once annually in an unbroken run from 1947 to 1989 — when the rancor was bitter and the hooliganism was rampant.

There was a memorable 2-1 victory for Scotland in 1977 at Wembley when fans poured onto the field, ripping up pieces of turf to take home and tearing down the goals. It reflected the Scottish euphoria of the time when they were qualifying for World Cups — five in a row from 1974 to 1990 — while England was missing from the FIFA party in 1974 and 1978.

“Scotland games," reminisced former England captain Terry Butcher, who played for his country from 1980-90, “they always stick out in your mind because of the sheer energy of the game, around the game, on the pitch and off the pitch.”

Only twice in three decades have England and Scotland met at a time of their own choosing — playing friendlies in 2013 and 2014 — rather than being paired in qualifying or tournaments. Both those games were contested without any of the fan violence of the past — as will be the hope around Wembley on Friday with only 3,500 members of the Tartan Army ticketed in the pandemic-reduced capacity of 22,500.

“There’s not the animosity any more,” Husband said. “What we feel is patronized.”

There's little desire in England or Scotland for the resumption of annual matches that would be more about sentimentality rather than a strong commercial proposition attractive to fans. England wants to face more illustrious opponents, while Scotland is focused on just trying to qualify for more tournaments.