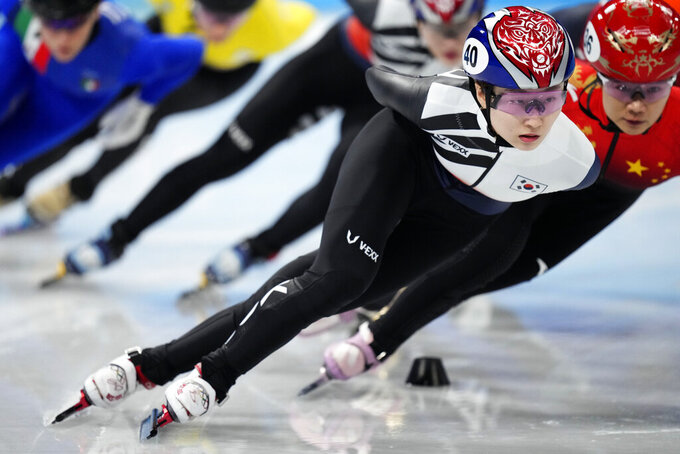 Hall clinched the gold on the first of three runs when he defied gravity with a trick called “right double 10 pretzel one.” He spun 900 degrees one way and, as G-forces took over, stopped the spin in midair and spun 180 degrees the other way. He stuck the landing and skied in backward to the finish, earning a score of 90.01.

Goepper was so impressive on his second run that he clinched the silver with a score of 86.48.

American men have won six of nine medals since slopestyle made its Olympic debut in 2014. Goepper added to his silver from the 2018 Pyeongchang Games and bronze from the 2014 Sochi Olympics.

Also up in the mountains, Mikaela Shiffrin set the fastest time in a downhill training session ahead of the Alpine combined, which will be held Thursday. That will be the superstar skier’s fifth event and she’s still looking for her first medal.

Those were far better results than down in the city, where the U.S. men’s hockey team was knocked out in the semifinals of the Olympic tournament when it blew a lead in the last minute of regulation and was shut out in a shootout, losing 3-2 to Slovakia.

On the slopestyle course, Hall and Goepper were rewarded by the judges for their epic creativity. Hall’s gold medal was the eighth for the United States in Beijing.

“I’m just stoked I did it, my best slopestyle ever — and for the world to see that,” said Hall, who was born in Alaska, grew up in Switzerland and lives in Utah.

“With where our sport’s been going, a lot of what we do, we call ‘spin to win,’ and, so, everyone is spinning as much as they can,” Hall said. “To take a new approach and do a trick that has almost no rotation but is still really, really hard — it was really, really sweet.”

Goepper’s big trick was a new approach at a double-cork 1440.

“Sometimes big contests are just sort of business as usual and you have to just slog together a run,” Goepper said. “This, it felt good to do it how we wanted to do it.”

The Secret Garden course has replicas of portions of the Great Wall carved out of artificial snow, and Goepper skied on top of a pagoda-shaped guard house known as The Shred Shed that doubles as a rail section up top.

“I think I had to separate myself in some other way,” Goepper said. “And I also thought jumping on top of that house would be really cool.”

The Beijing Olympics haven’t gone Mikaela Shiffrin’s way. She skied out of the two events she has gold medals in, the giant slalom and slalom, and didn’t come close to winning a medal in her next two races.

Maybe that will change in Thursday’s Alpine combined. Shiffrin is the reigning world champion in combined and also won the silver medal in the 2018 Pyeongchang Games.

She finished Wednesday’s training session in the downhill 0.93 seconds ahead of Wendy Holdener of Switzerland. The combined adds the times from one downhill run and one slalom run.

The U.S. men’s hockey team was the top seed in the knockout round and was looking for a deep run that would culminate in winning its first Olympic gold medal since the “Miracle on Ice” team in 1980.

It’s not going to happen. The Americans blew a late lead and lost 3-2 to Slovakia in a shootout in the semifinals.

“I’m just sad it’s over,” U.S. captain Andy Miele said. “Our team battled hard. Sometimes those bounces happen in hockey. Unfortunate it was on our side.”

Marek Hrivik of Slovakia knocked a loose puck past goalie Strauss Mann to tie the game 2-2 with 43.7 seconds left in regulation. Peter Cehlarik scored the game winner in the shootout, while the Americans went 0 for 5 against Patrik Rybar.

Miele was the final American player denied by Rybar. He wiped away tears after the loss.

“It’s a tough situation with the game riding on you,” Miele said. “I wanted to score, I didn’t and it stinks. I don’t know what else to say.”

Clement Noel of France won the men’s slalom on the strength of a fast second run. He moved up from sixth after the first leg to beat Johannes Strolz of Austria, who led after the first run, by 0.61 seconds. World champion Sebastian Foss-Solevaag of Norway took the bronze.

Elvira Oeberg skied fast and shot clean in anchoring Sweden to Olympic gold in the four-woman biathlon. It was the third medal of the Beijing Games for Oeberg, who won silver in the sprint and pursuit races in her Olympic debut.

Qi Guangpu of China won the gold medal in men’s aerials after missing the podium in Sochi and Pyeongchang. Qi was the only competitor to cleanly land a quintuple-twisting triple back flip in the medal round. Defending champion Oleksandr Abramenko of Ukraine won silver and Ilia Burov of the Russian team took bronze.

Choi Minjeong of South Korea successfully defended her Olympic title in the 1,500-meter short track speedskating race while Arianna Fontana of Italy took silver by two-thousandths of a second over Suzanne Schulting of the Netherlands. Fontana is the most-decorated short track skater in history with 11 Olympic medals, including three in Beijing.