EU calls on US to push exports to counter vaccine shortage 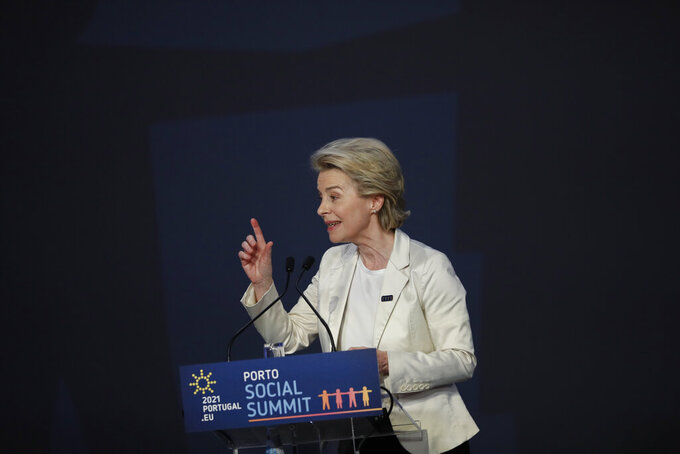 European Commission President Ursula von der Leyen speaks during the closing ceremony of the EU summit at the Alfandega do Porto Congress Center in Porto, Portugal, Friday, May 7, 2021. European Union leaders met for a summit in Portugal on Friday, sending a signal they see the threat from COVID-19 on their continent as waning amid a quickening vaccine rollout. (AP Photo/Francisco Seco, Pool)

PORTO, Portugal (AP) — The European Union called on the United States Friday to start boosting its vaccine exports to contain the global COVID-19 crisis, and said that the U.S. backing of patent waivers would provide only a long-term solution at best.

“We invite all those who engage in the debate of a waiver for (Intellectual Property) rights also to join us to commit to be willing to export a large share of what is being produced in that region,” said EU Commission President Ursula von der Leyen.

In the wake of the U.S. backing calls to waive patents on vaccine technology, French President Emmanuel Macron summarized the view from Europe when he said at an EU summit in Porto, Portugal: “You can give the intellectual property to laboratories that do not know how to produce it. They won’t produce it tomorrow.”

Spanish Prime Minister Pedro Sanchez gave the idea endorsed by U.S. President Joe Biden this week a guarded welcome, but he immediately added, “We believe it is insufficient. It should be more ambitious.”

While the U.S. has kept a tight lid on exports of American-made vaccines so it can inoculate its own population first, the EU has become the world's leading provider, allowing about as many doses to go outside the 27-nation bloc as are kept for its 446 million inhabitants. Many EU nations, however, have demanded a stop to vaccine nationalism and export bans.

Von der Leyen said that any patent waiver “will not bring a single dose of vaccine in the short and medium term."

Macron said it was more important for Biden to work on exports. “The Anglo-Saxons block many of these ingredients" needed to make vaccines, the French leader said, referring to Washington and London. “Today, 100% of vaccines produced in the United States of America are for the American market.”

European Commission President Ursula von der Leyen said this week that the EU had distributed about 200 million doses within the bloc while about the same amount had been exported abroad.

“Around 50% of what is being produced in Europe is exported to almost 90 countries,” von der Leyen said, and called on Biden and other vaccine producing regions or nations to step up their effort.

“We are the most generous in the world of developed nations. Europe should be proud of itself,” Macron said.

The EU is trying to regain the diplomatic initiative on vaccines after Biden put it on the back foot with his surprising endorsement of lifting patent protections on COVID-19 vaccines, seeking to solve the problem of getting shots into the arms of people in poorer countries.

EU leaders said they were ready to discuss the U.S. backing for proposals first submitted to the World Trade Organization by India and South Africa, but they said many other initiatives would be more effective at this point, ranging from ramping up production capacity to distributing raw materials. So far, they insisted, the issue of waiving patents is not a big problem.