EURO 2020: Fans back in stadiums but not in same numbers 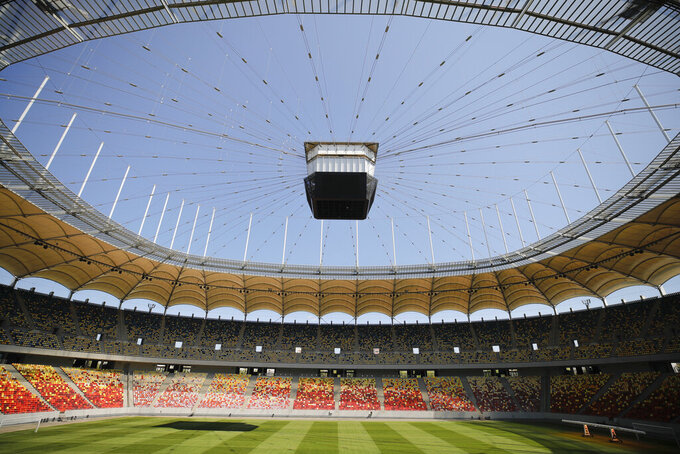 FILE - In this Sunday, April 25, 2021 filer, the video display casts a shadow on the pitch of the National Arena stadium, a venue of the Euro 2020 soccer tournament, in Bucharest, Romania. For players, the pandemic has meant a congested season that poses fitness challenges, let alone trying to avoid coronavirus infections. Financially playing the delayed tournament is essential for UEFA. For fans, the EURO 2020 24-team event should be the first chance for the widespread return of fans to stadiums across Europe since March 2020, assuming new restrictions aren't imposed. (AP Photo/Vadim Ghirda, File)

PARIS (AP) — With coronavirus restrictions easing to allow fans back into stadiums, there will be some atmosphere at last in the 11 host cities at the European Championship.

More in some than others.

Budapest plans to welcome all fans, while St. Petersburg and Baku hope to use 50% of their stadium capacity. But other major cities like Amsterdam, Bucharest, Munich and London are being more cautious with attendances that could fluctuate according to how the virus develops.

If things progress favorably in England the 90,000-capacity Wembley Stadium in London could be at more than 25% capacity for the semifinals and the final on July 11.

Named after the late great Johan Cruyff, the stadium is planning to use 25% of its 54,900-capacity. The Netherlands will play three Group C games at the Johan Cruyff Arena, against Ukraine, Austria and North Macedonia. Amsterdam will also host a round of 16 match between the runners-up in Groups A and B.

Azerbaijan did not qualify for Euro 2020, but the Olympic Stadium in Baku expects to be at half capacity with 35,000 fans for its matches. No foreign fans are allowed other than citizens from the participating teams, although supporters from Wales and Switzerland have a long trek for the Group A game on June 12. Wales faces Turkey four days later and then the Turks face the Swiss on June 20. Baku also has a quarterfinal match on July 3.

The Arena Nationala hopes to fill 25% of its 55,600 seats, with a potential increase for Group C matches involving Austria, North Macedonia and Ukraine. Romania failed to qualify for the tournament. The final match in the Romanian capital features the winner of Group F — possibly Germany, France or Portugal — in a round of 16 game on June 28.

Named after Ferenc Puskás, the prolific Real Madrid striker who scored 84 goals in 85 games for Hungary, the Puskás Aréna holds 67,215 fans. Hungary wants it full for the national team's opener against defending champion Portugal on June 15 and against World Cup champion France four days later. A marquee clash between Kylian Mbappe and Cristiano Ronaldo is scheduled for June 23 when France faces Portugal in the Hungarian capital. The Group C winner will play its round of 16 match in Budapest on June 27.

The Parken Stadium has a retractable roof and hopes to use one third of 38,065 capacity for Denmark's three Group B games — against Finland on June 12, World Cup semifinalist Belgium five days later and Russia on June 21. There is also a round of 16 game scheduled for June 28. It will feature the runners-up from Group D and Group E.

Hampden Park is Scotland's most storied stadium and authorities expect about 25% of the 51,866 capacity when the hosts take on the Czech Republic on June 14. Croatia will play the Czechs in Glasgow before the Scots then face the Croats. The round of 16 game on June 29 features the Group E winner.

England won its only major trophy at Wembley Stadium when it beat West Germany in the 1966 World Cup final. England will open its play in Group D against Croatia on June 13, then faces Scotland before concluding against the Czech Republic on June 22. England can stay in London for the round of 16 on June 29 if it wins the group. The semifinals are at Wembley on July 6 and 7 and the final is July 11. Authorities are limiting group games and the round of 16 match to 25% of 90,000 capacity but hope to increase that for the final week.

Cautious authorities in Germany are planning to allow 20% capacity at the 70,000 Allianz Arena, home to 31-time German champion Bayern Munich. The 14,500 fans could give Germany a bit of an edge in a difficult Group F with home games against France on June 15, Portugal on June 19 and Hungary on June 23. Munich also has a quarterfinal match scheduled for July 2.

Stadio Olimpico is home to Serie A teams Lazio and Roma, who share the 70,634-capacity stadium. At Euro 2020, a much-improved Italy will play in Group A with home advantage in all three games. The tournament opener will see Italy face Turkey on June 11. The Azzurri then face Switzerland on June 16 and Wales on June 20. There is a quarterfinal match in Rome scheduled for July 3.

St. Petersburg effectively hosted games during the 2018 World Cup, and authorities want about 34,000 fans inside the 68,134-capacity Krestovsky Stadium for Euro 2020. Russia has Group B games at home against Belgium on June 12 and Finland on June 16. Also, Finland will face Belgium on June 21. Two teams will return to St. Petersburg for a quarterfinal match on July 2.

Seville replaced Bilbao amid the coronavirus pandemic and intends to use 30% of the 60,000 seats at Estadio de La Cartuja. Three-time champion Spain will play its Group E games at the stadium against Sweden on June 14, Poland on June 19 and Slovakia four days later. The winner of Group B will play in Sevilla in the round of 16 on June 27.