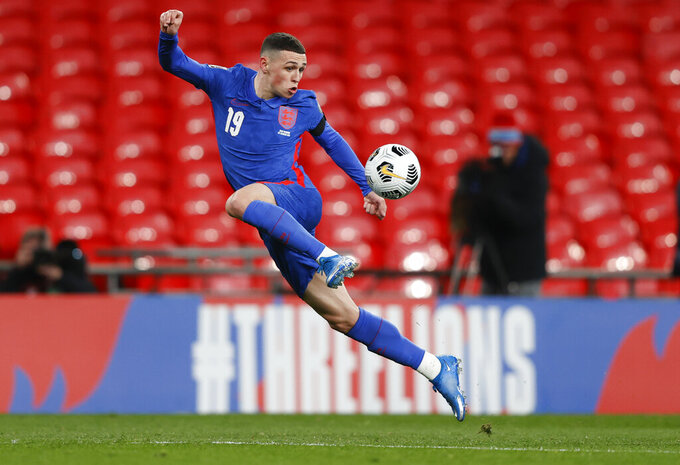 FILE - In this Thursday March 25, 2021 file photo, England's Phil Foden attempts to control the ball during the World Cup 2022 group I qualifying soccer match between England and San Marino at Wembley stadium in London. Exciting talents like Phil Foden, Joao Felix and Ferran Torres are among a host of young players set to play their first major international tournaments at Euro 2020. UEFA has expanded squads from 23 players to 26 and that could encourage coaches to take a chance on more up-and-comers.(Adrian Dennis/Pool Photo via AP, File)

Any European Championship offers young players a chance to make their name on the international stage. Even more so this time.

The coronavirus pandemic means three years have passed since the World Cup, so more players are making their major tournament debuts. UEFA has expanded squads from 23 players to 26, which could encourage coaches to take a chance on less experienced players.

Here is a look at some young players who can make their major tournament debuts at Euro 2020:

When Manchester City faced Borussia Dortmund in the Champions League quarterfinals, all eyes were on Dortmund striker Erling Haaland. But it was Foden who decided the outcome from midfield with a goal in each leg as City won 4-2 on aggregate. The 21-year-old Foden was born a few miles from City's home stadium and came through stiff competition in the club's youth system to stake his place in the first team. He played almost every game this season in City's run to the Premier League title. Foden was too young to play at the 2018 World Cup but made his England debut last year and immediately looked comfortable.

A hat trick in Spain's 6-0 rout of Germany last year underlined just how much the 21-year-old Torres means for a new-look Spain team. He's already a regular starter at international level and proved his worth for Manchester City this year with four goals in the group stage of the Champions League. Record-breaking 18-year-old Ansu Fati has sometimes outshone Torres in the Spain squad, but a severe knee injury in November means Fati won't return in time for Euro 2020.

The Atletico Madrid forward has sometimes seemed to be weighed down by expectations since moving from Benfica for 126 million euros ($153 million) in 2019. Injuries and a coronavirus infection disrupted his rhythm this season, but Joao Felix can be devastating when he is in form. He has seemed at home in the Portugal squad ever since he was trusted to make his debut in a Nations League semifinal match in 2019. Still, he may be a bit-part player at Euro 2020 with coach Fernando Santos preferring a front three of Cristiano Ronaldo, Diogo Jota and Bernardo Silva.

The AC Milan goalkeeper is still only 22, but he's already been part of the Italy team for nearly five years. Donnarumma is the definitive goalkeeping prodigy of the last decade and Italy's heir to the great Gianluigi Buffon. Donnarumma made his debut for Milan in Serie A at 16 in 2015 and immediately pushed aside more experienced teammates to make himself the club's first choice in goal. Italy's failure to qualify for the 2018 World Cup means that Donnarumma is set to make his major tournament debut at Euro 2020.

Chelsea made a splash by signing the 21-year-old Havertz for a reported 70 million pounds ($99 million) from Bayer Leverkusen last year. He's taken time adapting to life in the Premier League but seems more at home since German coach Thomas Tuchel took charge at Chelsea. Joachim Löw could select more young talents for his last tournament as Germany coach. Bayern Munich forward Jamal Musiala made his debut in March after choosing Germany over England, and 17-year-old Leverkusen midfielder Florian Wirtz is on the fringe of the squad.

The Netherlands has developed a whole new generation of players since its last tournament appearance at the 2014 World Cup. De Ligt emerged alongside international teammates Frenkie de Jong, Donny van de Beek and Ryan Gravenberch on the Ajax team which reached the 2019 Champions League semifinals. Since joining Juventus, de Ligt has cemented his place as one of the world's leading defenders. At the age of 21, he's already played more than 20 times for his country.