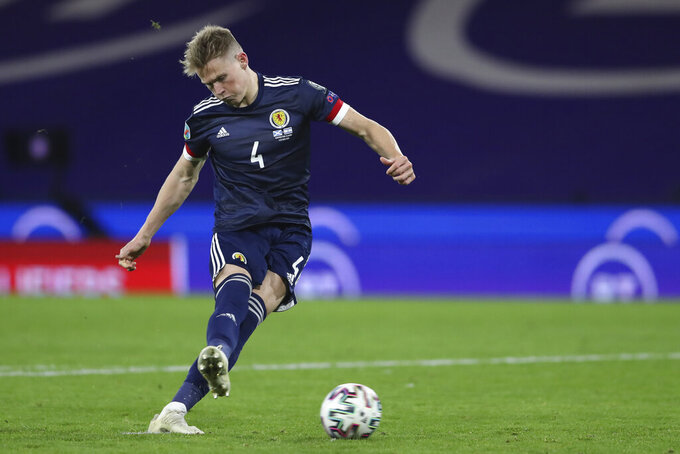 Scotland’s return to a major international soccer tournament after a 23-year wait was perfectly timed.

The first final tournament game ever to be played in a Scottish stadium will see the home team hosting the Czech Republic on June 14 in Glasgow in the European Championship.

Hampden Park holds the attendance record for a UEFA club competition game — around 136,000 to see Celtic beat Leeds in the European Cup semifinals in 1970 — but will only have about 12,000 of its modern capacity of 52,000 filled under pandemic-era safety rules.

“I was crying when I saw him crying,” Ferguson said. “Ryan Christie was crying for every Scotland fan. It resonates because of the love Scotland have for football.”

The sport has not loved Scotland back much in a mostly dismal time since exiting the 1998 World Cup with a 3-0 loss to Morocco.

The Scots have never come close to returning to the World Cup. For the European Championship, there were near-ish misses when trying to qualify for the tournaments in 2000, 2004 and 2008.

Scotland’s selection seven years ago for the multi-nation Euro 2020 hosting plan was a gift from UEFA to help reboot. A second UEFA assist was a new qualification path to Euro 2020 that gave third-tier nations their own playoff bracket.

Still, Serbia was strongly favored to win in Belgrade, even more so after a 90th-minute leveler tied Christie’s opening goal.

The Scots never took part in a competitive shootout until the Euro 2020 playoffs started last October, then won back-to-back against Israel and Serbia, scoring all five penalties each time.

The reward is Hampden games against the Czech Republic and Croatia, either side of a trip to Wembley to face old enemy England in Group D.

“The one thing I would warn against is paying too much attention to the England match,” Ferguson cautioned, adding it was “imperative” to beat the Czechs.

Goals are usually hard for Scotland to find, and Aston Villa midfielder John McGinn’s 10 is the most in the current squad.

Ferguson likes what he sees in a midfield anchored by one of his proteges from Manchester United, Scott McTominay, and the leadership of coach Steve Clarke since taking over two years ago.

“The thing that has impressed me about Steve is, he is unflappable,” Ferguson said of Clarke, whose long career includes spells as assistants to Jose Mourinho at Chelsea and Kenny Dalglish at Liverpool.

“He’s composed, he’s calm and I think that transmits itself to the team,” Ferguson said. “There’s no panic.”