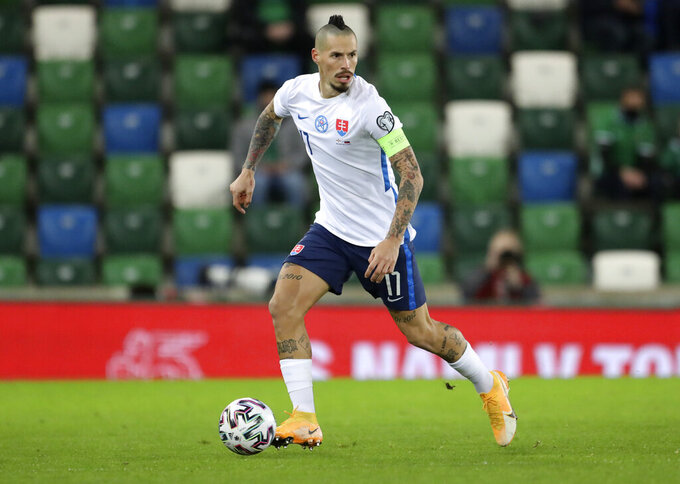 After reaching the last 16 at the European Championship five years ago, Slovakia's hopes for success at this year's tournament will be pinned on the same player as last time.

Five different coaches have been in charge and a handful of regulars have retired since Euro 2016, but captain Marek Hamšík remains the team’s figurehead.

Now without the likes of Martin Škrtel, Stanislav Šesták, Adam Nemec and Ján Ďurica, Milan Škriniar leads the defense while the team relies on Hamšík’s creativity and vison for its attacking game.

No one has played more games (126) or scored more goals (26) for Slovakia than Hamšík, who made his international debut in 2007.

The big question for Slovakia coach Štefan Tarkovič, however, is whether Hamšík can still produce on the biggest stages.

The attacking midfielder, who turns 34 in July, disappeared from the spotlight after ending his 11-year stint at Napoli in early 2019 to join Chinese club Dalian.

Travel issues amid the coronavirus pandemic and his aim to get playing time ahead of Euro 2020 prompted him to return to European soccer this year.

He joined IFK Gothenburg in March on a half-year contract. Gothenburg hoped Hamšík would bring the club closer to its first domestic title since 2007, but a calf injury forced him to sit out the start of the Swedish league season in April.

Slovakia will face Poland and Sweden in St. Petersburg and Spain in Sevilla in Group E.

Euro 2020 marks Slovakia’s third appearance at a major tournament since becoming an independent country in 1993. It advanced from its group on both previous occasions, and Hamšík was an essential part of the team’s success each time.

At the 2010 World Cup, Hamšík and forward Róbert Vittek helped Slovakia to a crucial 3-2 win over Italy, which sent the defending champions home after the group phase. Slovakia ended up losing to eventual finalist Netherlands in the last 16.

At Euro 2016, Slovakia upset Russia 2-1, with Hamšík scoring the second goal, before holding England to a 0-0 draw. Slovakia advanced as one of the best third-place teams but lost to Germany in the first knockout round.

Slovakia has been struggling since. The team failed to qualify for the 2018 World Cup, finished last in its Nations League group last year, and only made it to Euro 2020 by beating Ireland on penalties and Northern Ireland in extra time in the qualifying playoffs.

Without Hamšík, Slovakia got off to a poor start in its 2022 World Cup qualifying campaign in March when it failed to beat Cyprus and Malta. The team recovered a bit with a 2-1 win over Russia.

In search for more consistency at the European Championship, Tarkovič, who was an assistant to Ján Kozák at Euro 2016 and replaced Pavel Hapal in October, will turn to Hamšík — again.