EURO 2020: Winners and losers from the 1-year delay 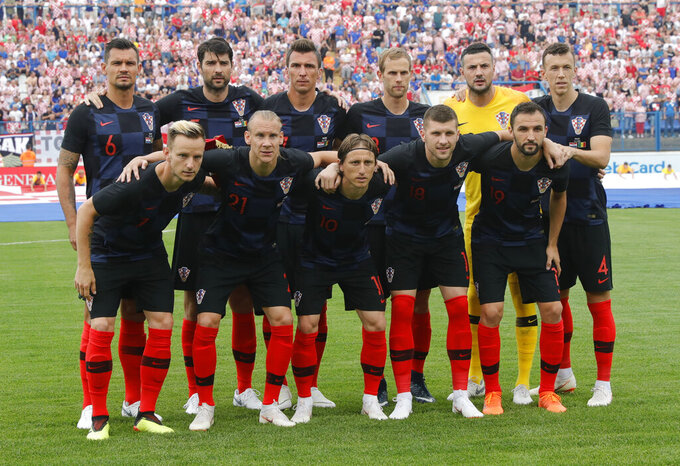 FILE - In this Friday, June 8, 2018 file photo, Croatia squad pose ahead of a friendly soccer match between Croatia and Senegal in Osijek, Croatia. Delaying the European Championship by a year has helped out some teams and hurt others. England had more time to integrate talented young players and deepen its squad. Croatia's squad from its run to the World Cup final in 2018 is nearing the end and Ivan Rakitic has retired from international soccer. (AP Photo/Darko Bandic, File)

Pushing the European Championship back a year because of the coronavirus pandemic has given some teams a chance to rebuild or integrate new players. Others have had their squads hit by injuries and retirements.

Here's a look at the winners and losers from the Euro 2020 delay:

Gareth Southgate has used the last 12 months to integrate up-and-coming players into the national team. Midfielder Phil Foden looks at home since making his debut in September and had an excellent season with Manchester City. Chelsea defender Reece James and Borussia Dortmund midfielder Jude Bellingham have also settled in. England relied heavily on striker Harry Kane at the 2018 World Cup even after it became clear he was fatigued, but this season has given Southgate time to experiment with other options. Strikers Dominic Calvert-Lewin, Ollie Watkins and Mason Greenwood were all untried a year ago, as was winger Jack Grealish.

The extra year has given Portugal a chance to plan for a future without Cristiano Ronaldo, even as he aims to break the record of 109 international goals in men's soccer. Before the pandemic hit, Diogo Jota was a Wolverhampton player who had played only 26 minutes for his country. Now he's a regular for Liverpool and his national team with six goals in 12 international games. João Félix is settling in, too. At the back, Rúben Dias is more assured after his first season at Manchester City. That helps to reduce the reliance on 38-year-old defender Pepe. Portugal will be defending a title in won in 2016 after riding its luck with only one victory in 90 minutes all tournament, and will need to be in top form against France and Germany in the group stage.

Lots of potential, but without the results to match. That's been the story of Turkish soccer since a golden decade in the 2000s when the national team reached the semifinals at the 2002 World Cup and the 2008 European Championship. Things are looking up again. A 4-2 win over the Netherlands in World Cup qualifying in March showed a team which can keep up with Europe's elite. Turkey followed up by keeping Erling Haaland quiet in a 3-0 win over Norway. The last 12 months have seen defender Ozan Kabak make the step up from Schalke to Liverpool, while Çağlar Söyüncü won the FA Cup with Leicester. Two Turkish players were key to Lille winning the French title, with 35-year-old striker Burak Yilmaz scoring 16 goals and Zeki Çelik a regular at right back.

Last year, the future looked bright for a Dutch team formed around the young Ajax squad which reached the Champions League semifinals in 2019. The likes of Matthijs de Ligt and Donny van de Beek had moved to top European clubs and the Netherlands was unbeaten in six games, including a 4-2 win over Germany. It's been downhill since. Defender Virgil van Dijk seriously injured his right knee and won't return in time for Euro 2020. Coach Ronald Koeman didn't wait for the postponed tournament and moved to Barcelona in August, replaced by Frank de Boer. And the Netherlands has won only five of 11 games since the pandemic began.

The postponement of Euro 2020 means Croatia will have to do without Ivan Rakitić. The 33-year-old midfielder retired from international soccer last year, shortly after he had left Barcelona and signed for Sevilla. Age is catching up with some key players who took Croatia to the World Cup final in 2018, with Real Madrid midfielder Luka Modrić now 35. Since international soccer resumed amid the pandemic in September, Croatia has lost twice each to France and Portugal, once to Sweden and in March posted a shocking 1-0 loss to neighbor Slovenia.

The 2018 World Cup hosts had the highest average age of any European team at that tournament, but that didn't stop them from reaching the quarterfinals on home soil. The core of coach Stanislav Cherchesov's team remains much the same in 2021. At the age of 37, Yuri Zhirkov has played 10 of Russia's last 11 games on the left flank, even though he played only half of Zenit St. Petersburg's league games. Russia cruised through Euro 2020 qualifying before the pandemic hit but found things tougher when play resumed. A 5-0 loss to Serbia in November came as a particular shock.