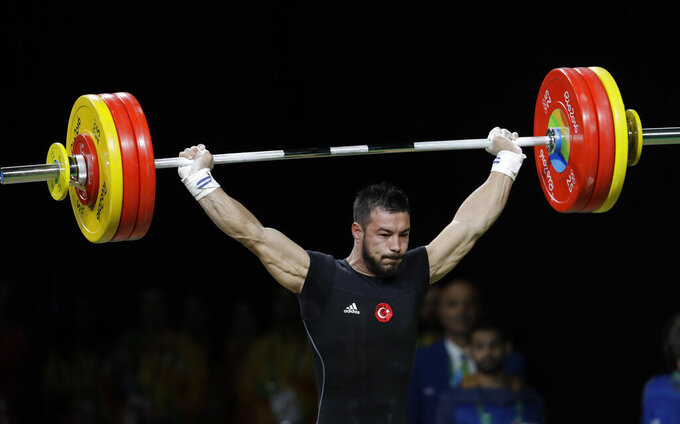 FILE - In this Tuesday, Aug. 9, 2016 file photo, Daniyar Ismayilov, of Turkey, competes in the men's 69kg weightlifting competition at the 2016 Summer Olympics in Rio de Janeiro, Brazil. The Turkish weightlifting federation says European weightlifting champion Daniyar Ismayilov faces being stripped of his title after failing a drug test. Ismayilov was the Olympic silver medalist in the 69-kilogram category in 2016 but was not on the entry lists for the upcoming games in Tokyo when they were published this week. (AP Photo/Natacha Pisarenko, FIle)

Ismayilov was the Olympic silver medalist in the 69-kilogram category in 2016 and won the European title at 73 kg in April. He was not on the entry lists for the upcoming games in Tokyo when they were published this week.

Ismayilov is provisionally suspended after he tested positive for a banned substance, the federation said.

The federation did not name the substance involved or give a date for a hearing. Turkey's Cumhuriyet newspaper reported Ismayilov gave the sample before winning gold at the European championships in Moscow in April.

If he is stripped of that gold medal, Moldovan lifter Marin Robu would be in line to inherit the European title because he placed second.

Ismayilov is the second current European weightlifting champion to have been suspended for a doping offense in the run-up to the Olympics. Dmytro Chumak of Ukraine, who competes at 109 kg, was suspended after he allegedly tried to bribe an official sent to test him in May, the International Testing Agency said last month.

Ismayilov represented his native Turkmenistan at the 2012 Olympics and switched allegiance to Turkey before the 2016 Games in Rio de Janeiro and won silver. He is the second medalist in his category to test positive. The original bronze medalist, Kyrgyzstan's Izzat Artykov, was disqualified following a positive test for the banned substance strychnine.

Turkey, in particular, has been under pressure over its record on doping. The country was restricted to entering only one male and one female athlete for Tokyo weightlifting because of past doping offenses.

Former Turkish federation president Hasan Akkus, now president of the European Weightlifting Federation, was charged last month with tampering with the anti-doping process after he allegedly manipulated records to change the jurisdiction of 17 Turkish doping cases in an attempt to dodge restrictions on the country's team.