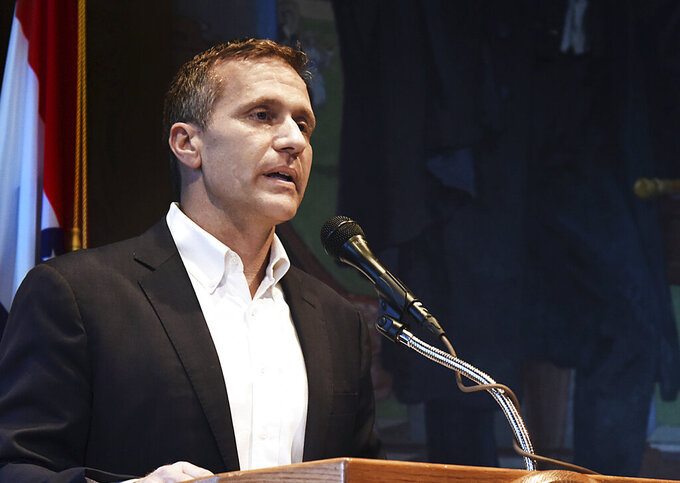 FILE - In this May 29, 2018, file photo, then-Missouri Gov. Eric Greitens announces his resignation during a news conference in Jefferson City. Greitens, the former Navy SEAL officer who rose quickly to become Missouri governor before scandal forced him out of office just a year and a half into his tenure, is making a political comeback with a bid for the Senate seat being vacated by fellow Republican Roy Blunt. (Julie Smith/The Jefferson City News-Tribune via AP, File)

O'FALLON, Mo. (AP) — Eric Greitens, the former Navy SEAL officer who rose quickly to become Missouri governor before scandal forced him out of office just a year and a half into his tenure, announced Monday that he will run for the Senate seat being vacated by fellow Republican Roy Blunt.

The announcement by Greitens, 46, came 14 days after Blunt said he would not seek a third term in 2022.

But Greitens had been laying the groundwork for a return to politics even before Blunt's announcement, with increasingly frequent appearances on conservative radio and television appealing to supporters of former President Donald Trump, who carried Missouri with 57% of the vote in 2020.

A number of other Republican candidates initially showed interest in replacing Blunt in heavily Republican Missouri, but the GOP field is narrowing.

“My sense is that the Republican Party has probably sent a clear message to all potential candidates for Blunt’s seat that they want to consolidate their efforts behind one candidate, and a candidate that will be successful,” Webster University political scientist Bill Hall said.

Blunt was the fifth Republican senator to announce he will not seek reelection, a retirement wave that might lead to an ugly campaign season next year and give Democrats fresh hope of preserving their Senate majority.

Greitens was a political outsider when he ran for governor in 2016, but his resume was impressive. In addition to his role in the elite military outfit, he was a best-selling author, a Rhodes scholar and had started a successful charity for veterans.

Greitens defeated establishment Republicans in the primary before winning in November. By the end of his first year in office, Greitens was getting buzz as a potential future presidential contender.

It all began to fall apart in January 2018 when a St. Louis TV station aired a report about an extramarital affair with his hairdresser in 2015, before he was elected. A month later, a grand jury indicted Greitens for invasion of privacy, accusing him of taking a compromising photo of the woman and threatening to use it as blackmail if she ever spoke of the encounter.

Greitens admitted to the affair (he and his wife, Sheena, divorced last year) but denied criminal wrongdoing and accused Gardner, a Democrat, of a politically motivated prosecution.

Another scandal followed in April when Gardner charged Greitens with another felony, accusing him of illegally using the donor list for his charity, The Mission Continues, to raise money for his 2016 campaign.

Meanwhile, the Republican-led Missouri Legislature began considering whether to pursue impeachment proceedings. Those discussions and the criminal charges came to an end when Greitens resigned in June 2018.

His return to public life has been gradual. He successfully sought reinstatement to the Navy, though not as a SEAL officer, in 2019. He passed out masks to first responders across the state in the early days of the coronavirus pandemic last spring. He has launched his own television show on the internet and Dish TV and is appearing often on conservative TV and radio programs.

St. Louis University political scientist Ken Warren said that despite the scandals that drove him from office, polling has shown Greitens with fierce support among about one-third of Missouri Republicans. That support might be enough for a primary win if several establishment candidates siphon votes from each other.

“Republicans want to win back the Senate, and to do so, they must hold Blunt’s Republican seat,” Warren said in an email. “Greitens would be a very risky candidate for the Republicans because he certainly could lose, even in the red state of MO.”