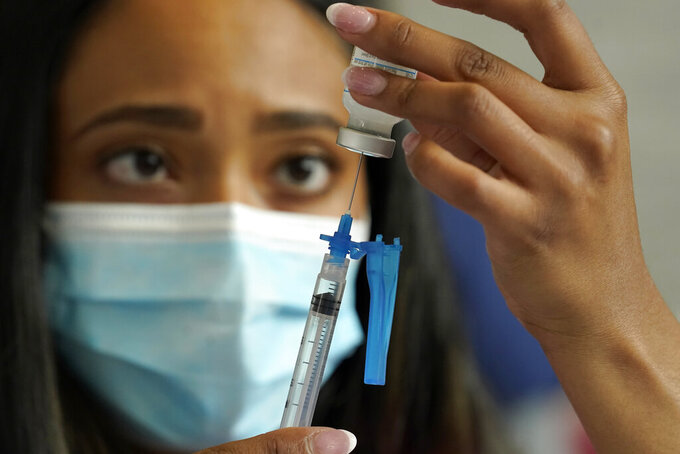 FILE - In this Wednesday, May 19, 2021 file photo, a licensed practical nurse draws a Moderna COVID-19 vaccine into a syringe at a mass vaccination clinic at Gillette Stadium in Foxborough, Mass. On Wednesday, June 23, 2021, federal officials said they plan to strengthen cautions about a rare side effect of some COVID-19 vaccines — chest pain and heart inflammation, mostly among teenagers and young adults. But in an unusual joint statement, top U.S. government health officials, medical organizations, laboratory and hospital associations and others stressed the overriding benefit of the vaccines. (AP Photo/Steven Senne)

NEW YORK (AP) — Federal officials said Wednesday they plan to strengthen cautions about a rare side effect of some COVID-19 vaccines — chest pain and heart inflammation, mostly among teenagers and young adults.

But in an unusual joint statement, top U.S. government health officials, medical organizations, laboratory and hospital associations and others stressed the overriding benefit of the vaccines.

“The facts are clear: this is an extremely rare side effect, and only an exceedingly small number of people will experience it after vaccination. Importantly, for the young people who do, most cases are mild, and individuals recover often on their own or with minimal treatment,” the statement said.

There does seem to be a link between the Pfizer and Moderna shots and some cases of heart inflammation, experts said at a meeting Wednesday of an outside panel that advises the Centers for Disease Control and Prevention on vaccinations.

The problem appears to be most common in young men after they receive their second of two doses, but it is nevertheless rare overall: There have been 323 confirmed reports of the inflammation in people younger than 30, and the vast majority recovered from their symptoms.

That risk “seems to me, and to many others, to be much lower than the risk of COVID,” said Dr. Brian Feingold, a University of Pittsburgh heart specialist who is not a member of the panel.

There have been nearly 2,800 COVID-19 deaths among adolescents and young adults, and more than 4,000 youths have suffered a dangerous condition called MIS-C that appears to be linked to the coronavirus. COVID-19 itself also can cause heart inflammation.

The expert panel did not vote to change its recommendation to CDC that Americans as young as 12 get the shots.

CDC officials said Wednesday that they plan to update their guidance to say that anyone who suffers the heart inflammation after one dose of the vaccine can defer a second shot. Meanwhile, the Food and Drug Administration is planning to put together a product warning that notes the risk.

One of the first Americans diagnosed with vaccine-linked heart inflammation was Sean Morrison, a scientist in Dallas. Three days after his second dose, he developed intense pain in his chest that he said felt like a heart attack.

He was hospitalized for four days as doctors investigated. They did not see any lingering effects, but they advised him avoid exercise so his heart could recover.

Morrison, a stem cell biologist at the University of Texas Southwestern Medical Center, praised the vaccines as a crucial weapon in the battle against a virus that has killed about 600,000 Americans. But he also called for more research into the side effect.