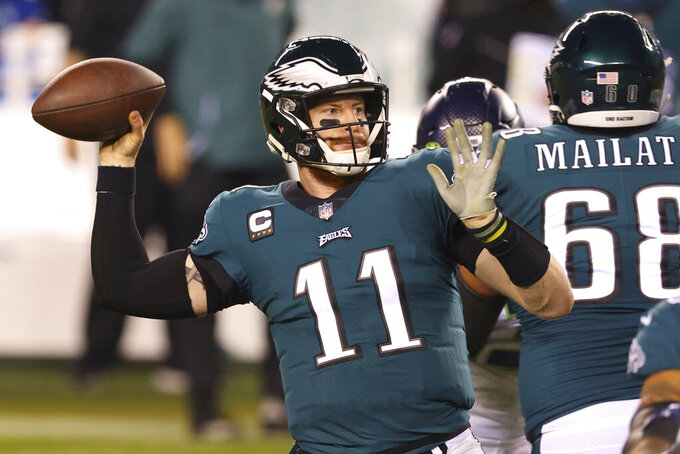 FILE - Philadelphia Eagles' Carson Wentz (11) passes during an NFL football game against the Seattle Seahawks in Philadelphia, in this Monday, Nov. 30, 2020, file photo. Jettisoning a veteran player often comes with a price in the NFL, and not just because of the loss of skill and experience. In most cases, these annual late-winter moves leave a team trying to create more space under the salary cap with a certain amount of dead money. That can put the squeeze on free agent pursuits. The Philadelphia Eagles are the extreme example this year with a $33.8 million charge for trading quarterback Carson Wentz.(AP Photo/Rich Schultz, File)

In their annual preparation for the official opening of the NFL's signing and trading period, teams will predictably jettison veteran players to create more space under the salary cap.

This spring roster cleaning often comes with a price, and not simply because of the loss of experience and skill.

It's called dead money — unaccounted-for bonus figures, basically — and the shrunken cap this season has brought even more of it to life than usual.

Due to the decline in revenues across the league during the COVID-19 pandemic, the salary cap for 2021 was set at $182.5 million, down from $198.2 million. Clubs have been planning for months for this unprecedented squeeze, but most current contracts were negotiated before the virus outbreak and thus with a higher cap in mind.

“Teams have to get creative and find solutions to stay under the cap,” Kansas City general manager Brett Veach said.

With new broadcast deals in the works and plans for refilling stadiums with fans this fall under way, spending for 2022 is sure to spike. For now, though, the puzzle of retaining players worth keeping and having room to pursue new ones is as jumbled as ever.

Former Green Bay executive Andrew Brandt's metaphor for the art of managing the salary cap is attempting to stuff a live octopus in the box. As soon as one tentacle is secured, another one might well sneak out the other side. In this analogy, the dead money is like a pile of packing peanuts and bubble wrap — glued to the bottom of the container. Those figures make it that much harder to make the goods fit.

According compilations by the sports contract website Spotrac, the team with the least amount of dead money at the end of the 2020 season was, surprise, the Super Bowl champion Tampa Bay Buccaneers. Conference runners-up Green Bay and Buffalo had the second and fourth-smallest amounts, respectively. Nine of the 13 lowest teams made the playoffs.

For all the financial leverage NFL teams have long held over players through non-guaranteed money in their deals, there's this, um, deadly catch when it comes to competing with the rest of the league in the offseason game of roster assembly.

The Philadelphia Eagles are feeling that pain this year, with the pending trade of quarterback Carson Wentz to Indianapolis. They'll carry $33.8 million in dead money for getting rid of Wentz, due to the bonus allocation that had yet to hit their cap. That's roughly 18% of what they can spend on their roster in 2021 for a player who will throw passes for another team.

The quarterback swap sending Matthew Stafford to the Los Angeles Rams and Jared Goff to the Detroit will stick both teams with double hits this season, one reason why the big-timers in this sport are rarely traded.

“It’s amazing how many people just sort of think, ‘If he goes to a new team, they’re going to be all right,’ but no,” Brandt said. “It’s not the teams taking on the contracts that’s the problem. It’s the team trading the contract, and that’s hard for people to understand.”

At least the Eagles, Lions and Rams have compensation to show for this. Cutting defensive tackle Kawann Short trimmed about $9 million off Carolina's salary cap, but the 32-year-old Short will still take up about $11 million of space despite not playing for the Panthers this season. The cap-strapped New Orleans Saints will lug hefty dead charges for cornerback Janoris Jenkins ($7.2 million) and wide receiver Emmanuel Sanders ($6 million) in exchange for relief created by their recent releases.

Here's a closer look at this vital component of salary cap management:

WAIT, HOW DO YOU FIGURE?

Contracts in the NFL are mostly composed of a mix of base salaries and bonuses that are either paid immediately or at certain intervals for simply remaining on the roster. Since the league first instituted a salary cap in 1994, a nod to the owners in exchange for unrestricted free agency for players, the bonus-proration rule has allowed teams to spread out the cost of a big contract to gain flexibility in managing the cap.

If a team wishes to cut the player halfway through the contract, owing no more actual cash, the transaction would equal $3.5 million in clearance from the salary cap commitments cleared for Year 3. Keeping the player for that season on the current deal would count $8.5 million against the cap, but releasing him triggers a $5 million dead money charge because there are two unaccounted-for years of the prorated bonus.

Trading a player is a good way to get rid of guaranteed salary, but that still requires a team to accelerate any remaining bonus figures onto the salary cap for the given year, as evidenced by the glaring case of the Eagles.

WHO'S GOT IT THE WORST?

As of Monday morning, according to data compiled by the Over The Cap website, NFL teams were carrying about $341 million in dead money. That's an average of more than $10 million per team. The Eagles, Rams and Lions have the most, with the Saints and Panthers following.

The Colts were one of the teams with negligible amounts thus far. Others largely free of dead money: Denver, Cleveland and Seattle.

WHAT'S THE BEST WAY TO AVOID IT?

The pay-as-you-go strategy was paramount for the Packers when Brandt, now a league analyst for Sports Illustrated and a professor of sports law at Villanova University, was in charge of contract negotiations and salary cap management. When quarterback Brett Favre was traded to the New York Jets in 2008, he left behind only a $600,000 cap hit for Green Bay.

“I had to resist temptation a lot to do the restructure game with Brett,” Brandt said. “It's not like I avoided it entirely, but I definitely tried to avoid it as much as I could.”

Smaller signing bonuses and larger salary guarantees are generally the best way for teams to avoid future problems, trying to match actual cash paid to annual cap hits as closely as possible, but players have desires, too, and negotiations are always a compromise.

One tool teams can use to lessen the impact on their salary cap is a post-June 1 designation for up to two released players each year, as the Rams did in 2020 with running back Todd Gurley. That allows them to spread dead money over two seasons. The caveat is because the relief doesn’t kick in until after June 1, it's too late to use those savings toward free agency that year.

Regardless, it’s a multi-million dollar puzzle that’s none too easy to solve.