EXPLAINER: What is behind Belarus athlete's Olympics crisis? 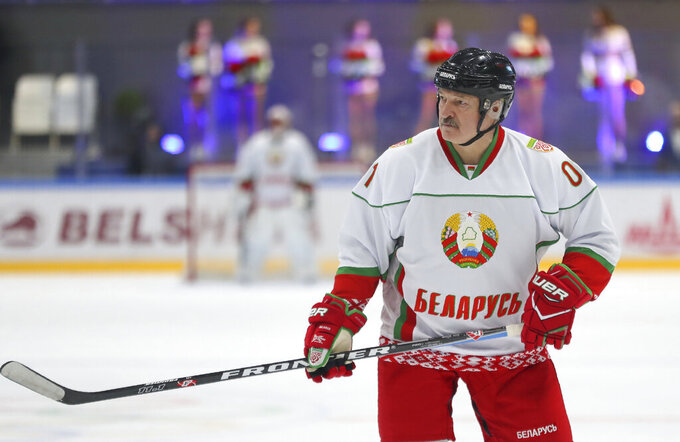 FILE In this file pool photo taken on Saturday, April 4, 2020, Belarusian President Alexander Lukashenko takes part in a hockey match during Republican amateur competitions in Minsk, Belarus. A feud between Belarusian Olympic sprinter Krystsina Tsimanouskaya and team officials that prompted her to seek refuge in Poland has again cast a spotlight on the repressive environment in the ex-Soviet nation, where authorities have unleashed a relentless crackdown on dissent. (Andrei Pokumeiko/BelTA Pool Photo via AP, File)

KYIV, Ukraine (AP) — A feud between Belarusian Olympic sprinter Krystsina Tsimanouskaya and team officials that prompted her to seek refuge in the European Union has again cast a spotlight on the repressive environment in the athlete's home country, an ex-Soviet nation where authorities have unleashed a relentless crackdown on dissent.

Tsimanouskaya told The Associated Press on Tuesday that the team officials who hustled her to the airport and tried to send her back to Belarus made it clear she would "definitely face some form of punishment” after she criticized the management of her team on social media.

Here is a brief look at the situation in Belarus and the dangers faced by those who dare to challenge Belarusian authorities.

Belarus was rocked by months of protests triggered by President Alexander Lukashenko's re-election to a sixth term in office in an August 2020 vote that the opposition and the West saw as rigged.

Belarusian authorities responded to the protests, the largest of which drew up to 200,000, with a massive clampdown that saw more than 35,000 people arrested and thousands beaten by police. Leading opposition figures have been jailed or forced to leave the country.

Lukashenko, who has ruled Belarus with an iron fist for 27 years, has denounced his opponents as foreign stooges and accused the U.S. and its allies of plotting to overthrow his government.

In a show of their determination to hunt down dissenters regardless of costs, Belarusian authorities in May diverted a Ryanair flight from Greece to Lithuania and ordered it to land in the Belarusian capital of Minsk where they arrested a dissident journalist who was on board.

After his arrest, the journalist, Raman Pratasevich, appeared in several interviews on state television, saying he was fully cooperating with investigators, pledging respect for Lukashenko and weeping. The opposition and the West denounced the TV interviews as coerced.

On Tuesday, a Belarusian activist who ran a group in Ukraine that helped Belarusians fleeing persecution was found hanged in a park in the Ukrainian capital of Kyiv. Police said it launched a probe to investigate whether it was a suicide or a murder made to look like suicide.

After targeting opposition leaders and activists for months, Belarusian authorities have ramped up their crackdown in recent weeks with hundreds of raids of offices and homes of independent journalists and activists.

Lukashenko denounced the activists as “bandits and foreign agents” and vowed to continue what he called a “mopping-up operation” against them.

More than 50 NGOs are facing closure, including the Belarusian Association of Journalists, the biggest and most respected media organization in the country, and the Belarusian PEN Center, an association of writers led by Svetlana Alexievich, the winner of the 2015 Nobel Prize in literature.

Amid the crackdown, Belarus' European Union neighbors, Poland and Lithuania, have offered strong support to protesters and provided refuge to those fleeing repression. Poland quickly granted Tsimanouskaya a humanitarian visa. The athlete boarded a plane on Wednesday morning at Tokyo’s Narita International Airport that left the gate for Vienna, though it was not immediately clear if that would be her final destination.

Lukashenko, who has a keen interest in sports and served as the head of the Belarus National Olympic Committee for nearly a quarter-century before handing over the post to his older son in February, has sternly warned the country’s Olympic athletes that they better show high performance.

“If you go there like tourists and bring nothing back, you better not return to the country,” Lukashenko said.

The Belarusian leader and his son both have been banned from the Tokyo Olympics by the International Olympic Committee, which investigated complaints from athletes that they faced reprisals and intimidation during the crackdown on protests in the country.

“Lukashenko sees sports as a showcase of his regime, he wants to make it shine and he considers any failures and losses as a blow to his personal reputation and authority,” said Valery Karbalevich, an independent Belarusian political analyst, adding that the Belarusian leader “sees sports as part of the state ideology.”

The Belarusian president was furious when the ice hockey world championship was pulled away from the country earlier this year over the authorities’ crackdown on protests.

“Lukashenko believes that Belarus is surrounded by enemies and sees any criticism as part of a Western conspiracy,” Karbalevich said. “That is why he saw the situation with Tsimanouskaya as a new attack by Western enemies and part of a hybrid war against Belarus.”

Many Belarusian athletes have faced reprisals after speaking out against the authorities and voicing their support for protests.

Belarus basketball star Yelena Leuchanka, an ex-WNBA player, spent 15 days in jail in October after protesting peacefully against authorities. She later told the AP that prison conditions were awful, with no hot water and toilet in her cell and inmates forced to sleep on metal beds without mattresses.

Maria Shakuro, the captain of the Belarus national rugby team and bronze medalist of the European Beach Rugby Championships, also was sentenced to 10 days in jail for participating in a peaceful protest.

The legendary Olympic hammer thrower, Vadim Devyatovsky, was dismissed in September as the head of the country’s athletics federation after a Facebook post critical of Lukashenko.

And Natalya Petrakova, one of the most famous Belarussian handball players, was fired as the senior coach of the women’s handball national team after signing a letter of protest.

The Belarusian Sport Solidarity Foundation said that a total of 124 athletes have served jail terms, faced dismissals or other repressive action.

“The horrible situation in the country is also reflected in sports,” said Vadim Krivosheyev, an activist with the sports foundation. “All the power of the repressive machine has been directed at athletes who dared to express their civic position. Sports in Belarus is facing quick degradation as only those athletes who are loyal (to the authorities) are allowed to perform."