EXPLAINER: What's going on with the Virginia Parole Board? 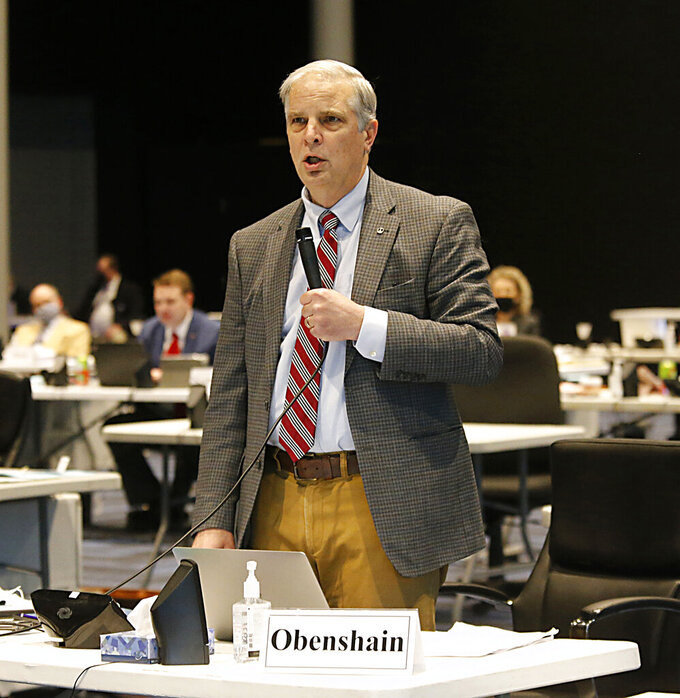 Sen. Mark Obenshain, R-Rockingham, give a speech criticizing the State Parole Board during the floor session of the Virginia Senate, which is meeting inside the Science Museum of Virginia in Richmond, Va., Friday, Feb. 26, 2021. (Bob Brown/Richmond Times-Dispatch via AP) 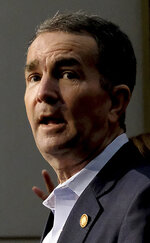 RICHMOND, Va. (AP) — For nearly a year, Virginia Gov. Ralph Northam's administration has been facing questions about the work of the five-member state parole board.

What began as a controversy over a handful of cases last spring has escalated into a bitter, mostly partisan dispute involving a fired investigator at the state government watchdog agency and allegations of a cover-up.

A look at how we got here:

HOW DID THIS START?

In March 2020, amid a push to get eligible inmates out of crowded prisons as the coronavirus pandemic began to grip the U.S., the Virginia Parole Board granted release to 95 inmates, just over half the number approved in all of 2019.

Among those 95 were at least 35 people convicted in killings, some of them high-profile, brutal cases. As news of the parole grant decisions made their way around the state, news reports began to bubble up about concerns from prosecutors and victims' families.

In many cases, they complained they had not been properly notified of the decision or, in the case of victims' families, given the chance to weigh in as required by law.

Then, in April, news broke that the board had granted parole to Vincent Martin, who was sentenced to life in prison for the 1979 execution-style killing of a Richmond police officer. The decision outraged the law enforcement community, and both the victim's family and Richmond's top prosecutor asked the board to reconsider.

The victim's family also filed a complaint with the Office of the State Inspector General, Virginia's government watchdog agency.

WHAT HAPPENED TO MARTIN?

Once it came to light that the inspector general's office was investigating, Martin's release was put on hold. But he was freed about a month later, before the investigation into his case concluded.

State officials have praised Martin as an exemplary leader and peacekeeper in the correctional system. He had served 40 years for the crime.

WHAT DID THE WATCHDOG FIND?

In late July, the inspector general's office released a report that was redacted nearly to the point of uselessness. About a week later, Republican legislators who had been required to receive a copy of the report made it public. The report said the board and its former chairwoman violated state law and the board's own policies and procedures in the Martin case.

The Associated Press and other news outlets learned the inspector general's office was investigating other parole board matters and sought to obtain those findings. But after the release of the Martin report by GOP lawmakers, the inspector general's office would release only redacted documents and withheld the full findings from the Republicans, who threatened to sue.

The parole board operates entirely out of public view and is largely exempt from the public records law. The IG's office relied on those exemptions in withholding the details of its own work.

WHEN DID THIS HEAT UP?

After the inspector general's office clammed up about its findings, documents began to leak to the press.

News outlets obtained a longer, draft version of the Martin report that contained more critical conclusions about errors made in the case. Officials would not answer questions about the differences, which prompted Republicans to start floating allegations of a cover-up or political interference with the work of the ostensibly independent watchdog.

News outlets also obtained inspector general reports into other inmates' cases, which showed a similar pattern of violations. They painted a picture of a board that for years, or possibly decades, did not properly notify victims.

WHAT'S THIS ABOUT A WHISTLEBLOWER?

Jennifer Moschetti, the lead investigator on the parole board matter, sought to come forward to lawmakers as a whistleblower over concerns about how the investigation was being handled.

She was put on leave from her job a few days later and she then sued her boss, Inspector General Michael Westfall, who she alleges took action against her in an effort to insulate himself.

Her lawsuit also says that shortly after the Martin report was made public, she was summoned to the governor’s office. There, she said, she and Westfall were “interrogated” by various administration members regarding her reports, investigations and findings.

On Monday, she was fired. Her attorney says he will withdraw her lawsuit but she is pursing other legal options.

WHAT WAS THE BOARD’S RESPONSE?

In the case of Martin, current parole board chair Tonya Chapman, who was not part of the decision to free him, provided a response that said the findings were “based on faulty assumptions, incorrect facts, a misunderstanding of certain procedures, and incorrect interpretations of the Virginia State Code.”

Northam’s administration has criticized the inspector general's office work as biased and characterized some findings as minor problems that had been remedied through recently passed legislation and a change in leadership at the board.

The vast majority of problems uncovered by the inspector general took place during the tenure of the previous board chair, Adrianne Bennett. Bennett for months did not respond to reporters' requests for comment before recently obtaining counsel.

Attorney Jeffrey Breit said Tuesday that the work of the inspector general's office had not presented a fair or complete view of the parole board and its work.

Northam's chief of staff, Clark Mercer, has said the governor is talking with lawmakers about budgeting for an outside investigation of the controversy.

Breit said Bennett would cooperate with such an investigation and “looked forward to it, actually.”

Mercer suggested the investigation would include a look at the Republicans who gave the inspector general's findings, which were labeled confidential, to the press.

In the meantime, Republicans have been campaigning aggressively on the issue in a busy election year.