F1 expanding in Europe, not reaching the Americas in 2020 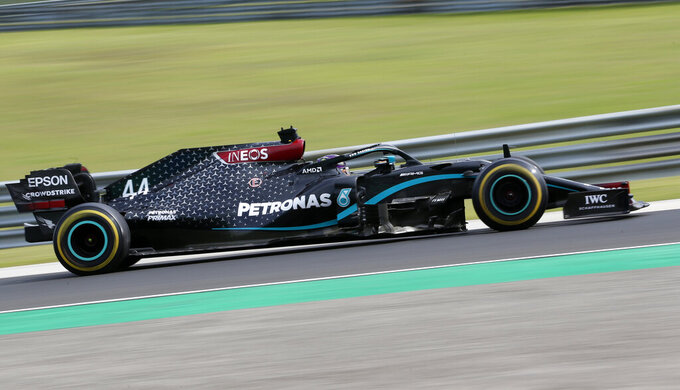 PARIS (AP) — Formula One is expanding in Europe and will not be reaching the Americas, where the coronavirus pandemic forced the cancellation of races in Brazil, Canada, Mexico and the United States on Friday.

F1 still hopes to complete 15-18 races by mid-December. Vietnam will reportedly host its inaugural race in Hanoi and the season is still planning on ending in Bahrain and Abu Dhabi.

After selling out last year, the United States GP ticket sales were rocketing.

But calling off the race at the Circuit of The Americas in Austin, Texas in late October became increasingly inevitable.

“This isn’t about sports or economics of a business. This is about health and a pandemic and a global crisis," COTA chairman Bobby Epstein told The Associated Press by phone. "We’re not unique. We’re heavily reliant on international events.”

The Austin track is under contract through 2021. Epstein wouldn’t comment on contract negotiations for a new deal, nor would he say if this year’s cancellation would cause F1 to extend his current deal by one year.

But he did say he expects Austin to host the US Grand Prix “for a long time."

Texas has had a surge in COVID-19 cases over the past month, reaching record highs in deaths and hospitalizations in the past week, with Austin one of the hot spots.

Brazil's race is a fan's favorite and held at Interlagos in São Paulo.

“In November we will be in a much better situation than European countries that have already hosted races,” São Paulo Mayor Bruno Covas contested. "As of now there is no prohibition for such events, as long as there is no public (no fans).

"We have been notified of the decision that affects not only São Paulo, but all races in the Americas. We respect that decision and we continue the negotiations with organizers for the extension of the contract starting next year.”

This is the last year of São Paulo’s contract. Bidders from Rio de Janeiro want to build a track to take the F1 race there, but construction has not started and the environmental licensing process is not finished.

Mexico was supposed to follow Brazil with a race in November.

But these days the Autódromo Hermanos Rodríguez in Mexico City is being used as a COVID-19 hospital.

Race director Federico González had no choice but to cancel.

“We are committed to make everything necessary to guarantee the safest experience for all the fans and that´s the reason to (cancel) our race," González said. “Besides guaranteeing the safety of everybody in attendance, this decision (was) to give peace to all involved and also to comply with the guidelines made by the national authorities."

The Canadian GP in Montreal was already postponed from its mid-June date and no slot could be found for this year, having being tentatively rescheduled for Oct. 9-11.

Race promoter Francois Dumontier said the crucial factor was no spectators inside.

“As of that moment, as a private business, it was no longer viable,” he said. “It also prevented us from contributing to the costs of the races and the costs of bringing F1 to North America which, amid the pandemic, were much higher than usual."

The Eifel Grand Prix will be hosted at the iconic Nürburgring in Germany on Oct. 11, followed by the Portuguese GP in Portimão two weeks later, and the Emilia-Romagna GP in Italy on Nov. 1.

These races take this season's total to 13 — all of them in Europe.

The Nürburgring, situated amid the Eifel mountain range in western Germany, is among the most revered in F1. German great Michael Schumacher won five races at the daunting high-speed track.

“We are pleased that we continue to make strong progress in finalizing our plans for the 2020 season," F1 chairman Chase Carey said. "We also want to pay tribute to our incredible partners in the Americas and look forward to being back with them next season when they will once again be able to thrill millions of fans around the world.”

F1 has started successfully with three races completed, two in Austria and one in Hungary. There have been only two positive cases for the virus among personnel at the track from nearly 15,000 tests.