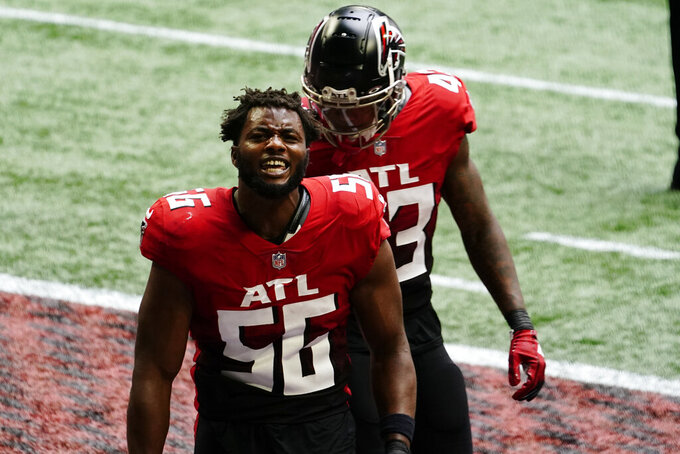 Atlanta Falcons defensive end Dante Fowler Jr. (56) celebrates a goal-line stop of the Detroit Lions during the first half of an NFL football game, Sunday, Oct. 25, 2020, in Atlanta. Fowler was called for unsportsmanlike conduct after a team mate knocked his helmet off during the celebration. (AP Photo/Brynn Anderson)

ATLANTA (AP) — The Atlanta Falcons canceled practice and worked virtually Friday after a member of the football staff tested positive for COVID-19.

The Falcons said the move was “out of an abundance of caution” while contact tracing is used to determine if anyone else might have been exposed.

The team expects to play Sunday's game against the Denver Broncos.

The Falcons already have experience in dealing with the league's most intensive protocols.

The team worked virtually three days before an Oct. 18 game at Minnesota. The players were able to return to the training facility in suburban Flowery Branch the next day to complete their preparations.

“We're really familiar with this because of what we had do a couple of weeks ago,“ Morris said. ”We know what it looks like. We're comfortable with it. And we still get a chance to go out there and perform."

The Falcons hope to reopen their facility on Saturday to do their final walkthrough for the game.

Morris said the main drawback to missing practice Friday was not getting a chance to assess the status of receiver Calvin Ridley. He hasn't practiced this week because of a foot injury and it's not known if he'll be able to play against the Broncos.

The Broncos have their own virus concerns.

That brought the number of coronavirus infections and possible exposures to three players, three assistant coaches, two executives and other staffers at team headquarters over the past few weeks.