Fans are allowed at Euro 2020, even if stadiums aren't full 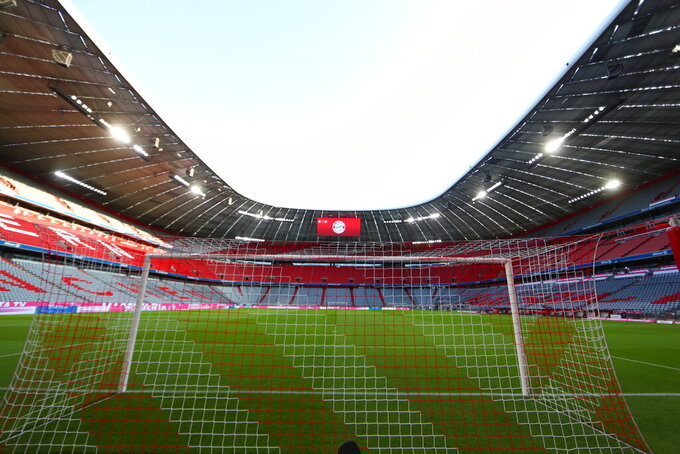 FILE - In this Friday, Sept. 18, 2020 file photo shows the 'Allianz Arena' stadium prior to the German Bundesliga soccer match between FC Bayern Munich and Schalke 04 in Munich, Germany. The Bavarian state government says the Allianz Arena in Munich will fill about 20% of its capacity for games during the European Championship. (AP Photo/Matthias Schrader, file)

All 11 host cities — from Glasgow to St. Petersburg, and Sevilla to Bucharest — have agreed to allow at least some fans into their stadiums for Euro 2020 matches. Restrictions related to the pandemic, however, could still affect the final numbers — even with the tournament set to open on Friday in Rome.

The most should be in the east, with Budapest, Baku and St. Petersburg expected to fill between 50% and 100% of capacity. In Hungary, that means a possible 68,000 fans — the full stadium capacity for the Puskas Arena — could be there to watch matches involving the host nation taking on both Cristiano Ronaldo and European champion Portugal, and Kylian Mbappe and World Cup champion France.

Portugal and France will also play each other in the city, on June 23, with advancement to the round of 16 possibly on the line.

“The first priority, second priority and third priority at a tournament is always fan safety," said Martin Kallen, the CEO of UEFA Events, a commercial company run by the governing body. “It’s important for everybody that we have spectators back — it represents a step towards normality for all of us in society.

"But, with that, we ask that supporters are sensible and plan ahead. Come on time; don’t rush to the stadium. Wear a mask. Keep a distance from others when possible and make safety a priority in all that you do.“

Most other stadiums are expected to fill about 25% of capacity, with Munich the lowest at 22% and a some others possibly going as high as 45%.

London, which will host the most games at the tournament with eight matches, is expected to have 25% capacity at Wembley Stadium. That number could be increased for the two semifinal matches and the final.

Foreign fans have not been banned from attending matches in other countries, but there are protocols to follow for those traveling around the continent. UEFA has set up a dedicated page on the tournament’s website for up to date information.

“Football without fans is not the same and it’s very important to have them back,” Kallen said in an interview posted on the Euro 2020 website, “so I will be very, very happy to see supporters throughout the tournament and we can feel satisfied that we managed to make this happen.”