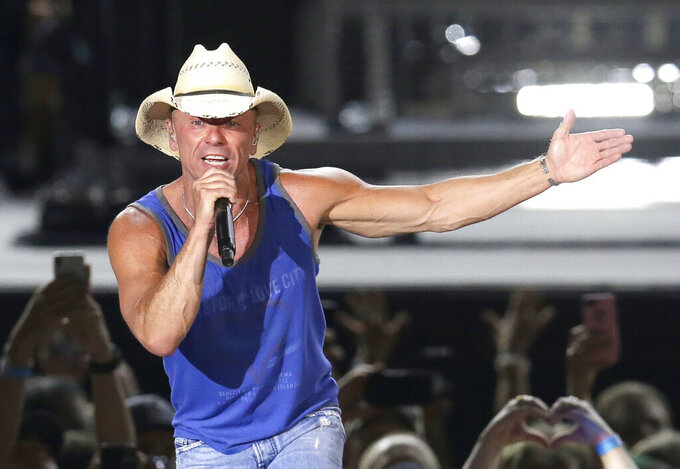 FILE - In this June 23, 2018 file photo, Kenny Chesney performs during the Trip Around the Sun Tour in Phoenix. Chesney’s No Shoes Reefs organization is helping to have an artificial reef installed off of Florida’s Atlantic Coast. The organization and other marine groups donated and installed 13 reef balls on the ocean floor off of Delray Beach in Palm Beach County. (Photo by Rick Scuteri/Invision/AP, File)

Brett Favre knows something about Super Bowls. Nick Saban knows a bit about winning championships. Kenny Chesney knows all about topping the charts.

All three and SiriusXM NFL Radio host Bruce Murray will conduct a Super Bowl town hall Friday that will be repeated on various channels of the satellite radio outlet through the weekend. There will be plenty of football talk, lots of music references, and probably some down-home stories shared with the audience.

“There is only a handful that can perform in front of 70,000 and he did that on his stadium tour,” Favre says of his friend Chesney. “Most are playing to 5,000, 2,500. We are talking about present acts and great acts who have been in their later years ... but also current popular people. But they are not filling Carolina Panthers or University of Tennessee stadium. Only a few handful can do that."

Favre recalled Chesney picking up his family with his jet for a trip to perform at Superfest in Baton Rouge, even though it was a short drive from Mississippi.

“He was adamant about picking us up," Favre said. "And we just kind of hung on the side and back of the stage. I was like, we were in the football stadium and there had to be 50,000 — 80,000 if you count on the turf and in the stands. It was incredible.”

The town hall will be immediately followed by a No Shoes Radio special featuring Chesney and DJ sessions from some of his friends including Favre, Peyton Manning and Eli Manning.

“It is hard to stay popular and current,” Favre says. “Maybe in football it is a little easier; obviously you do not have the longevity so to speak, you can’t be playing QB at 70. Like Jimmy Buffett is as popular now as he has ever been. That is not just because he sings songs, you have got a lot more that goes into it.

“Jimmy probably goes to his team: `Hey we have got to stay popular. A lot of my early fans are dead and gone. I got to stay current.′

“Now how to you do that? Some have been able to do that and others have not. Kenny is one of those who definitely has figured it out.”

Kicker Ryan Succop didn’t sign with Tampa Bay until September, limiting his chances to get to know his new teammates, especially during a pandemic.

That includes his quarterback, Tom Brady.

“It’s been awesome to get a chance to play with the greatest player that’s ever played this game, and to be able to call him a teammate is something that I think we are all really really thankful for,” Succop said.

The COVID-19 protocols put in place by the NFL made sure the season was played, but those rules also kept players from spending much time with teammates. So no talks over breakfast or lunch. Succop said the times he has talked with Brady at practice or other times have been really positive.

“He does a great job of making everyone feel important,” Succop said. “He’s really, really nice to everybody, really kind. And I just I really respect how he treats people with so much respect.”

ONE FOR THE THUMB?

Chiefs defensive line coach Brendan Daly, who also carries the title of running game coordinator, will coach in the Super Bowl for the fifth consecutive time — and sixth in seven years. He’s in his second season with Kansas City after five seasons with New England.

The only Super Bowl defeat Daly has experienced was three years ago in Minnesota, when the Patriots were beaten by Philadelphia. So a win Sunday would give him five championship rings. Yes, Daly says he kind of pinches himself on a regular basis over this opportunity to still be coaching this time of year.

“There’s not many people that get to do it,” Daly said. "It’s a fun game to be a part of. Every one of them is unique. It does not get old. I can promise you that. You work extremely hard to get to this point. It’s an honor and a privilege to get this opportunity.”

Nike and the NFL are committing $5 million in equipment to help expand girls' flag football in high schools.

“Girls flag demonstrates that football is for all, and the greater the participation, the stronger the game, and the more young women can build the transferrable skills football provides for achieving success in life,” Vincent said.

This investment is a multi-year plan starting with a one-time donation up to $100,000 in gear to state athletic associations offering girls flag football as a high school sport or making progress with a pilot program this year. Gear being donated includes uniforms, socks and accessories like sports bras.

Florida is the first state to get a grant and has been promoting girls flag football for more than a decade. Only five other states sanction high school flag football for girls: Alaska, Arizona, Georgia, Nevada and New York. This initiative aims for providing financial support that removes barriers for other states.

PATRIOTS AT THE SUPER BOWL

The New England Patriots will be at the Super Bowl. At least heir team plane.

The Kraft family is using the Patriots’ plane to fly 76 healthcare workers to Tampa, Florida, for the Super Bowl, the same plane used 10 months ago to bring PPE back from China. This trip is a thank you to healthcare workers that also hopefully encourages people to get vaccinated when possible.

“Ten months later, it’s an honor for us to celebrate these healthcare workers by giving them a well-deserved break for a day and an opportunity to enjoy the Super Bowl, a reality that is only made possible because of the vaccines,” said Robert Kraft, Patriots’ chairman and CEO.

Governors from Connecticut, Maine, New Hampshire, Rhode Island and Vermont were given four tickets each for healthcare workers, with the other tickets going to workers at not-for-profit hospitals in Massachusetts caring for COVID-19 patients. All had to be vaccinated at least 14 days before traveling.

The healthcare workers will get a police escort from Gillette Stadium to Logan Airport on Sunday; tickets to the NFL TikTok Tailgate concert featuring Miley Cyrus for vaccinated healthcare workers; two nights at a hotel; and a gift card to spend at Raymond James Stadium.