FCS draft prospects generally opted not to play this spring 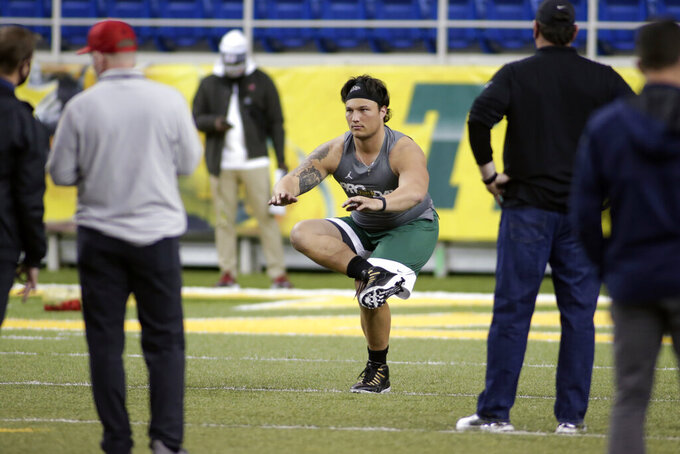 There’s a common thread linking most of the Football Championship Subdivision players who expect to hear their name called in the NFL draft.

They didn’t participate in their schools’ pandemic-delayed spring season.

“Ultimately, it just comes down to athletes taking care of their bodies,” North Dakota State offensive tackle Dillon Radunz said. “You can go out and have fun and do that, and there’s a certain purity to that, but next thing you know, some guy tears his ACL in the spring, and now he misses out on the spring season, and misses out on the fall season. Then he has to wait another whole year and a half just to play football again.”

When the NCAA announced that the FCS season wouldn’t start until February, it left draft prospects from those schools facing a dilemma. Do they stick with their schools for the spring season or use that time to get ready for the draft?

Most decided to start preparing for their future.

North Dakota State quarterback Trey Lance said playing a spring season wasn’t feasible because of the way the schedule was designed. The FCS playoffs start Saturday, less than a week before the draft.

“I would have had to leave my team in the middle of the season (for the draft),” Lance said. “Here at North Dakota State, we play for national championships. That’s the expectation every single year. So for me, if I was going to stay in school and play, I would have stayed and played the spring and the fall as well.”

Lance and Radunz will likely be the first two players drafted from non-Football Bowl Subdivision programs next week. Lance is projected as a top-10 overall pick. Radunz seems likely to get taken in the second round.

Radunz noted that even if he had played a spring season and avoided injury, the move could have caused long-term drawbacks. He believed playing a full college schedule in the spring and an NFL season in the fall ultimately might have shortened his career.

“You’re just playing that much football in a short period of time, and it’s just not good for a body, especially at this high level of play,” Radunz said.

Here’s a breakdown of some other draft prospects from schools outside the FBS ranks.

Brown gained nearly 100 pounds while at Northern Iowa to develop into a 6-foot-8, 311-pound prospect. Brown opted out after Northern Iowa decided to delay its football season to the spring, but he did participate in the Senior Bowl and had an impressive pro day performance.

Johnson was a 2019 finalist for the Walter Payton Award that goes annually to the top FCS player. Johnson entered the transfer portal when South Dakota State delayed its season, but he ultimately decided to enter the draft. He caught a combined 139 passes for 25 touchdowns over 2,500 yards in the 2018 and 2019 seasons.

Meinerz, the lone Division III player on this list, also didn’t play this fall because the pandemic prevented Wisconsin-Whitewater from having a fall season. The 6-3, 320-pound Meinerz gained plenty of attention in Senior Bowl workouts despite breaking his hand that week. He’s most likely to play center in the NFL.

Mills, who is 6-1, made five interceptions and had eight pass breakups in 2019. He got a Senior Bowl invitation even though North Carolina Central didn’t have a fall season in 2020.

Rochell was the rare FCS draft prospect who played multiple games for his school over the last year. Central Arkansas played a nine-game schedule last fall, and Rochell appeared in seven of those games. He also got a Senior Bowl invitation. He intercepted four passes in 2018 and five in 2019.

Smith had a huge season in 2019 with 14 sacks, 21 ½ tackles for loss, five forced fumbles and four pass breakups. He didn’t play for Northern Iowa this spring after its fall season was pushed back. The 6-6, 252-pound Smith projects as an edge rusher in the NFL.

Uphoff had 70 tackles, seven pass breakups and two interceptions for Illinois State in 2019 and earned a Senior Bowl invitation. Uphoff, who is 6-2 and 209 pounds, has NFL size and showed enough speed to return kicks at one point in his college career.