Fed will likely stress commitment to low rates amid pandemic 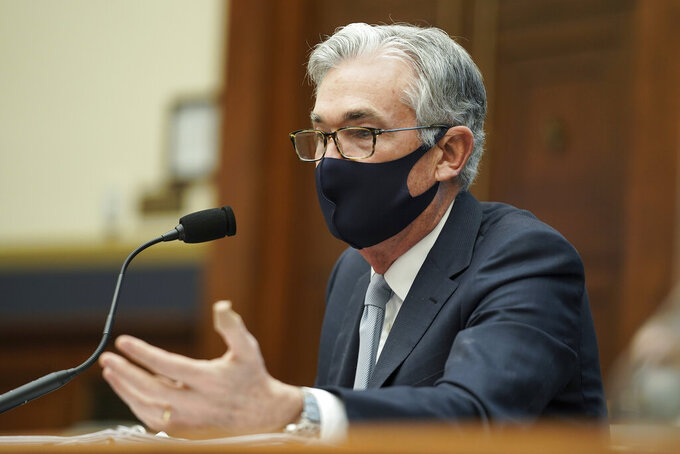 WASHINGTON (AP) — The Federal Reserve this week will likely underscore its commitment to its low-interest rate policies, even as the economy recovers further from the devastation of the viral pandemic.

Chair Jerome Powell is sure to strike a dovish tone at a news conference after the Fed's latest policy meeting ends Wednesday. He may, in particular, aim to puncture any speculation that the Fed might soon curtail its aggressive efforts to support the economy, including its bond purchase program that aims to hold down long-term interest rates.

The conditions the Fed has laid down before it would adopt any policy changes aren't close to being met, so no new actions are expected this week. Still, analysts will scrutinize the Fed's policy statement and Powell's comments to reporters to gauge how Fed officials are reacting to recent economic developments.

Since the Fed last met, in mid-December, there has been some good news. The distribution of an effective vaccine has begun and a $900 billion relief package was enacted in late December. President Joe Biden has since proposed another financial support plan — a $1.9 trillion package that is larger than many economists had expected and will require congressional approval.

In recent months, Powell had repeatedly urged Congress and the White House to provide such stimulus. But he will likely try to avoid sounding overly optimistic about the economy’s prospects for fear of encouraging speculation that the Fed will slow or withdraw its support earlier than expected.

“The emphasis will be on, ‘We’re not out of the woods yet,’ ” said Seth Carpenter, an economist at UBS and a former Fed economist.

Some central bank officials have suggested that they might consider withdrawing Fed stimulus later this year, earlier than investors generally expect, but Powell contradicted that view in a public appearance earlier this month. He will likely do so again Wednesday.

Powell also said that the Fed would provide ample notice when it does conclude that it will slow its bond-buying program.

“We will communicate very clearly to the public,” he said, “and will do so, by the way, well in advance of active consideration of beginning a gradual taper of asset purchases.”

The Fed wants to avoid a repeat of 2013, when then-chairman Ben Bernanke told Congress that the Fed was considering tapering the bond buys it was then engaged in, which caught markets unaware, sharply pushed up longer-term interest rates, and earned the moniker the “taper tantrum.”

Most key economic data have recently been disappointing and show an economy faltering in the face of the still-raging viral pandemic. Since the Fed's last meeting ended Dec. 16, the government has reported that employers shed jobs last month for the first time since April. And consumers also cut back on retail spending in December for a third straight month.

The Fed has pinned its benchmark short-term interest rate near zero, and it signaled in December that the rate would likely remain there through 2023. The central bank is also buying $80 billion in Treasury bonds and $40 billion in mortgage bonds each month to help keep longer-term borrowing rates low. In December, the Fed said it would continue those purchases until “substantial further progress” has been reached toward achieving its goals of low unemployment and stable inflation of about 2% a year.

The prospect of additional stimulus and ongoing vaccinations has raised concerns that as Americans eventually release pent-up demand for airline tickets, hotel rooms, new clothes and other goods and services, the economy might accelerate and inflation could surge above 2%. If many companies don't initially have the capacity to meet that demand, prices would pick up. Yet most Fed officials appear unconcerned about those trends potentially igniting runaway price increases.

“It's very difficult to imagine out-of-control inflation,” Charles Evans, president of the Federal Reserve Bank of Chicago, said earlier this month. “I welcome above-2% inflation. Frankly, if we got 3% inflation, that would not be so bad.”

One reason the Fed isn't expected to raise rates anytime soon is that it adopted a framework last year that calls for inflation to average 2% over time. Given that inflation has mostly languished below that level since the Fed adopted it as a target in 2012, policymakers would have to let inflation run above 2% for some time to make up for the years of below-target price increases.

The Fed refers to this framework as “flexible." It isn't committing to a time period over which inflation will top 2%. The Fed prefers some inflation in order to guard against deflation, a destabilizing fall in wages and prices.

As a result, even if hiring picks up and unemployment tumbles later this year as the vaccines curb the virus, economists expect the Fed to stress that it won't raise rates until inflation actually accelerates.

Jim O'Sullivan, an economist at TD Securities, said in a research note that Powell will likely drive that message home Wednesday.

“We expect him to emphasize that inflation will be key to when the Fed’s ‘exit’ (from low rates) begins," O’Sullivan wrote, “and most Fed officials are skeptical that a few strong quarters for growth will suddenly lead to a meaningful pickup in the trend in inflation.”