Fifth-year options are a good measure of NFL draft classes 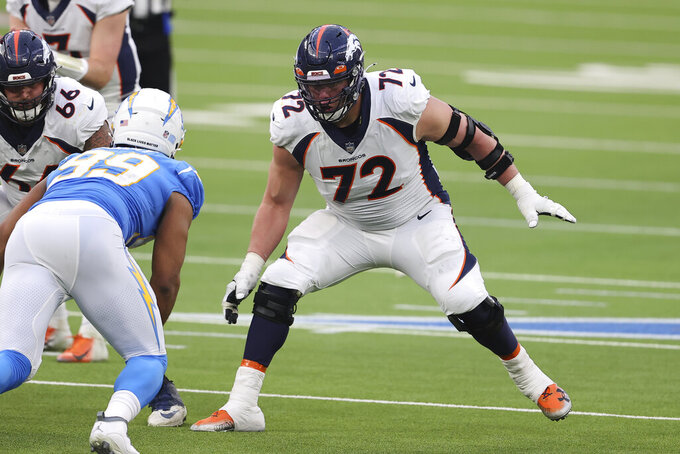 FILE - Denver Broncos offensive tackle Garett Bolles (72) blocks during an NFL football game against the Los Angeles Chargers in Inglewood, Calif., in this Sunday, Dec. 27, 2020, file photo. The Broncos declined Bolles’ fifth-year option in 2020 but by November had given him a $68 million, four-year extension. (AP Photo/Peter Joneleit, FIle)

DENVER (AP) — Most NFL teams are getting their first glimpse of their 2021 draft class at rookie minicamps over the weekend.

This year's draft class is more intriguing than usual because of COVID-19, which resulted in numerous 2020 opt outs, the combine cancellation and a prohibition of teams interacting with prospects at pro days.

So, coaches and team executives from 29 teams are getting their first good look at their rookie class on the football field this weekend. (The Jets, Raiders and Colts held their rookie minicamps last weekend).

“You do get to meet them, shake their hand, talk to them face to face, not on Zoom,” Broncos coach Vic Fangio said Friday.

As usual, first-rounders draw special scrutiny and while many fans pine for immediate verdicts, we won't really know how this curious class stacks up until 2024 when teams can exercise fifth-year options on their first-round selections.

The rookie wage scale adopted in 2011 requires that all rookies sign four-year contracts. For players taken in the first round, the team has the option to extend the contract for an extra season, which is guaranteed for injury, meaning they can still be cut later on. Team must exercise that option prior to the player’s fourth year.

This fifth-year option has emerged as a major metric in judging draft classes since the 2011 group came up for extensions in 2014.

If history holds, a dozen of this year's first-rounders won't get a fifth season with the team that drafted them.

Getting a fifth year declined doesn't necessarily mean a guy is a bust: of the dozen players rejected from the 2015 class, nine are still in the league.

Some players get contract extensions before the fifth-year option is available and others are denied a fifth year, but sign a long-term extension anyway.

This year, 17 of the first 18 picks from the 2018 draft got a fifth year with the only outlier being QB Josh Rosen, the 10th overall pick by Arizona. The Cardinals traded him to Miami, where he was waived before his fifth-year option came up. He's currently on the 49ers' roster.

The 2013 draft class was one of the worst in memory, especially in the top 10, where six picks were denied the fifth year. Overall, teams declined the option on nine of the top 17 picks.

Other tidbits about the eight draft classes that have featured the fifth-year options:

— Overall, 96 players have been denied a fifth season with the team that drafted them.

— Only two spots in the draft order have had zero fifth-year rejections, the No. 1 overall pick (predictably) and (oddly) the No. 11 selection. That should be good news for QBs Trevor Lawrence of the Jaguars and Justin Fields of the Bears, the first and 11th overall picks, respectively, last month.

— WR Kelvin Benjamin, class of 2014, is the only 28th overall selection whose option was exercised.

— The most successful position on offense is tackle, where 18 of 27 picks have been extended. On defense, it's cornerback with 23 of 32 selections getting a fifth season.

— The worst position is running back (only five extensions out of 12 selections) followed by inside linebacker (four of nine).

— The Browns, who have had multiple first-rounders in some years, have eight times declined a fifth-year option, most in the league, followed by the Jaguars with six.

— The Chargers are the only team that hasn't denied a fifth-year option. Technically, Houston didn't pick up 2012 draft pick Whitney Mercilus' fifth-year option but that was because they gave him a four-year extension instead.

— With the Browns being the team that most often declines to exercise a fifth-year option and the No. 26 overall selection rejected six times in eight years, let's keep a close eye on cornerback Greg Newsome II, selected by Cleveland in that spot last month.

There are some success stories for players who didn't get a fifth year added to their rookie contracts.

Sammy Watkins, denied by Buffalo in 2014, won a Super Bowl with the Chiefs in 2020, and Fournette, denied by Jacksonville last year and then released, caught on with the Buccaneers, whom he helped win Super Bowl 55.

“I think there are two kinds of people in life," teammate Dalton Risner observed. "There’s one kind that lets that (rejection) get to them, and they put their head down and say, ‘Yeah, everyone is right.’ There is another type of person, and that person lets it fuel them, and they say, ‘No, I’m going to prove them wrong.'

"That’s exactly what Garett did.”