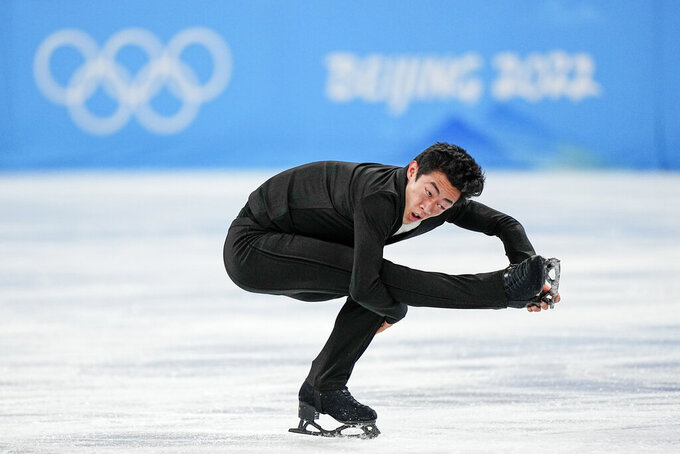 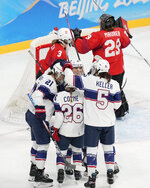 BEIJING (AP) — It's time for the United States vs. Canada in women's hockey.

Round one of two, in all likelihood.

The North American powerhouses play live Monday night on USA Network in what may be the most anticipated event on Day 3 of the Beijing Games. It would be even more significant, except the teams seem likely to meet again for the gold medal later.

Also Monday, Nathan Chen begins his bid for individual gold when he skates in the men's short program.

The U.S. and Canada have combined to win all seven Olympic women's hockey tournaments, and only once has anyone else (Sweden) finished second. In 2018, the Americans won the gold in a shootout over Canada.

“When you actually see two equals getting after it, it’s a special opportunity, and that’s why I think people tune in to watch it,” U.S. coach Joel Johnson said. “It should be fun.”

“Our team is right where we need to be at the right time," American veteran Amanda Kessel said. "We had a bunch of games cancelled against them the past few months, so we have been waiting for that day to get another chance to play them.”

Chen won the short program while competing for the U.S. in the team competition, but that event didn't include Japan's Yuzuru Hanyu, the two-time defending men's champion. It was still a good start for Chen at these Olympics.

“It’s nice to be able to have run-throughs like this," he said. "Whatever you can take from each practice, whether good or bad, you take with you, and that’s the same thing with competition.”

NBC and USA Network will have live coverage of the men's short program in prime time.

Eileen Gu, the San Francisco native competing in freestyle skiing for her mother's homeland of China, is a medal contender in Big Air. The women's final will be live on NBC in prime time.

Brittany Bowe, a flagbearer for the U.S. in the opening ceremony, is a medal hopeful for the Americans in speedskating. Her best races are the 1,000 meters and the 1,500, and the latter takes place Monday.

USA Network will show the 1,500 live early in the morning, with an encore presentation later in the day. NBC also plans to air coverage of that race in prime time.

Ireen Wust, the 35-year-old Dutch star who has won five Olympic golds and 11 overall medals, is also in that event.

The mixed team ski jump — a new event — is part of USA Network's early coverage and will be shown by NBC in the afternoon. ... Two short track speedskating gold medals are at stake in the women's 500 and men's 1,000. Italy's Arianna Fontana won gold in the 500 in 2018, one of nine Olympic medals in her career. USA Network will have live coverage of both short track events in the morning, and NBC is showing the women's 500 in prime time and the men's 1,000 as part of its late-night slate. ... Norway's Aleksander Aamodt Kilde leads the World Cup standings in the super-G, which will be live on NBC in prime time.