Fired-up Alexander-Arnold heads into CL with point to prove 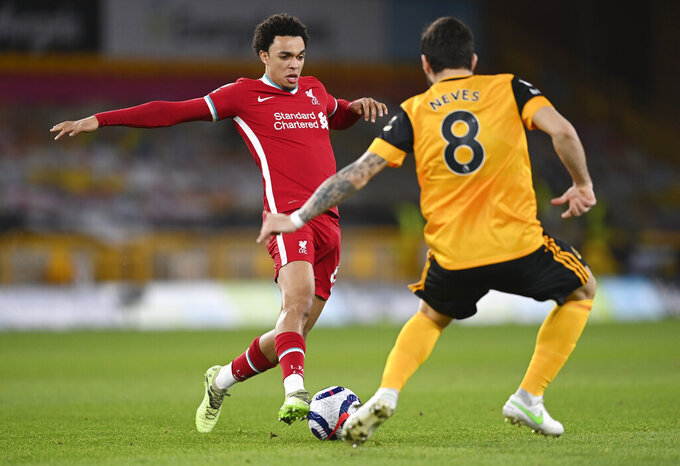 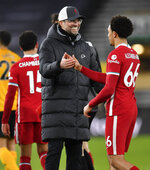 It was the kind of cross that few in world football could have expected to deliver, certainly not a player whose status has apparently plunged to being the fourth best right back in England.

Yet there was Trent Alexander-Arnold, bending in a stunning delivery with whip, pace and precision from the right wing for Diogo Jota to head home and set Liverpool on its way to a big Premier League win at Arsenal.

Alexander-Arnold turned away, pumped both fists and — with a fierce stare — gave out a guttural roar. It was a release of emotion that probably wasn’t lost on England coach Gareth Southgate.

Liverpool heads into its matchup with Madrid in the Champions League quarterfinals with some of its key players back on song after a difficult season — among them a player who, in a way, has redefined the right-back role.

From his position out wide, Alexander-Arnold has been the most creative player on a team that has conquered Europe and, finally after 30 years, the English game over the past couple of years.

His long-range passing, his set pieces and most obviously his assists have made him arguably the world’s stand-out right back since 2018, even if his defending has been the subject of criticism on occasion.

This season, though, his level has dipped. He missed some of the condensed preseason after contracting the coronavirus and then picked up some niggly injuries. Playing in a patched-up Liverpool defense missing injured center backs Virgil van Dijk, Joe Gomez then Joel Matip hardly helped Alexander-Arnold during the middle part of the season as the champions’ Premier League title defense imploded and its star right back visibly struggled for confidence.

One game particularly stood out: the 1-0 loss to Southampton on Jan. 4 when Alexander-Arnold gave the ball away 38 times, a league-high for the season, before being substituted in the 77th minute.

The last couple of months have been more like the Alexander-Arnold of recent seasons, however, even if that wasn’t enough to convince Southgate to pick him in his most recent England squad — the last before Southgate must choose his 23-man group for this summer’s European Championship.

“I am not criticizing Gareth Southgate, and I don’t want to have an argument. I respect his role and his decisions,” Klopp said. “But I know the player better than anybody else, any other coach, and I can say that he is a world-class player, and not only offensively.”

In Southgate’s opinion, Kieran Trippier, Kyle Walker and Reece James are in better form than Alexander-Arnold. To Klopp, that should not matter.

“If you compare Lionel Messi every year with his best season ever, then he is not performing now like he was performing in 2005 and 2006 maybe,” Klopp said. “But he is still the world’s best player.”

Thankfully for Liverpool, whereas Messi is 33, Alexander-Arnold is 22. The best years of his career are, in theory, ahead of him.

Indeed, England’s loss might be Liverpool’s gain in the short term. Alexander-Arnold was able to have a couple of weeks off from the intensity of competition, train hard with Liverpool, and recharge his batteries ahead of the season run-in that will see the Reds attempt to win the Champions League for the second time in three years and get back into the top four of the Premier League.

“For us, it was not a character test or whatever. What we did was not two weeks working on how we can show Gareth Southgate that he was not right with his decision," Klopp said Monday. “What we wanted to do was to get Trent to play his best football. What he did quite a few times in the past for us.”

Liverpool’s right-hand side looks well-equipped to cause Madrid problems in the first leg at the Santiago Bernabeu on Tuesday, with winger Mohamed Salah also scoring against Arsenal in the 3-0 win.

Madrid coach Zinedine Zidane must choose between Marcelo and Ferland Mendy at left back. Mendy, in particular, has struggled defensively in a 3-5-2 formation that Zidane sometimes uses when switching from a traditional 4-3-3. Madrid is also without its central-defensive stalwart Sergio Ramos.

So expect balls to fly into the area from the flank of the re-energized Alexander-Arnold, probably English football’s best crosser since David Beckham.

Alexander-Arnold is playing with a point to prove as he seeks a way back into the England squad for the Euros. And that can only benefit Liverpool in its quest to finish a difficult season with the high of a seventh European Cup title.