On Football: Sounds of Silence for radio broadcasters 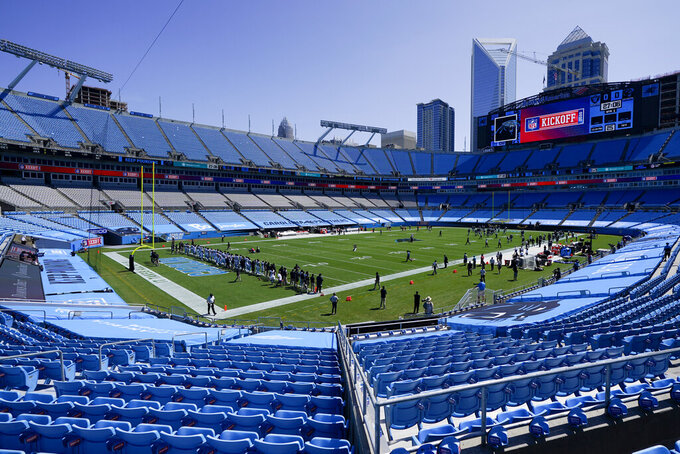 Members of the Carolina Panthers stand during a special presentation in an empty stadium before an NFL football game against the Las Vegas Raiders Sunday, Sept. 13, 2020, in Charlotte, N.C. (AP Photo/Chris Carlson)

Bob Wischusen and Dave Pasch are two of the most respected — and busiest — play-by-play announcers in football. Not only do they both have regular college football gigs for ESPN, they are the radio voices of two NFL teams.

Last Sunday, they sat hundreds of miles away, nobody around them cheering or booing, while trying to paint a picture for their listeners despite basically being handcuffed and using plastic utensils.

Wischusen was at the Jets' practice facility in New Jersey while the team was playing at Buffalo. Pasch was in a broadcast booth, except it was in the Cardinals' State Farm Stadium while Arizona was at San Francisco.

The coronavirus pandemic, and NFL protocols to prevent infections that, thus far, have been very effective, have caused all of the 32 team radio crews to adjust. A vast majority of those crews did or will be doing their broadcasts remotely.

Not all — Chicago's group was at Detroit for the opener; Tennessee's will accompany the Titans on the road for now; New Orleans' will travel with the Saints, though not on team charters.

Being on site to describe the action in football is critical because, unlike most other sports, television feeds don't show all of the players at the same time. There can be a lot of action going on that TV viewers — and radio announcers — can't see.

“It's almost trial by fire,” Wischusen says. "These are lousy circumstances for everyone and they did the best they could with setting it up.

“I would say the only sport you could probably call off TV and not miss massively important things is basketball,” adds Wischusen, one of ESPN's top college hoops announcers.

“Pretty much everyone is on the screen all the time. You might miss a facial reaction by a player or a coach yelling at a player or official.”

Wischusen notes that baseball also can be difficult when the camera is on the ball on a base hit and not on the runners or other fielders. But football, with 22 men on the field, many moving in different directions, presents an ever larger challenge.

“If a quarterback throws a deep ball, when I am at the stadium my eyes leave the ball and immediately go downfield,” he says. "Who is he throwing to, is it under-thrown, might it be intercepted, is the receiver covered? Now calling it off a monitor, all I can see is a ball sailing through the air. When the Jets had the TD by Jamison Crowder, halfway through the call I am kind of stunned. I am thinking, 'Wow, there are no Buffalo Bills between him and the end zone.' I expected a Bills player coming in to tackle him. I don’t know off the monitor if it is an all-out blitz. I don’t see there is no deep safety.

“When I'm there, I can see everything, and I have called a million games, so you know what to expect and to anticipate. When it's off a monitor, you are completely beholden to shots the director picks. And you have no idea on stuff you would normally instinctively know.”

Another issue to deal with when broadcasting remotely is sound. The audio off a telecast doesn't synch perfectly with the radio side. With no fans at stadiums, and bogus sound being pumped in, well, that's sort of like a tap dance to symphonic music for the play-by-play guys.

Radio announcers also play off the real crowd noise under normal circumstances. Instead, they are now forced to keep up the enthusiasm even with the faux cheers that barely disrupt the actual sounds of silence.

“You almost have to bring your own energy, like the players,” Pasch says. “Normally in a big NFL, college game or playoff game you really feed off the emotion in the crowd.”

Pasch and analyst Ron Wolfley were plenty energized when the Cardinals stormed back to beat the defending NFC champs.

“I can only imagine what it would be like walking by Ron and me in the booth," Pasch says. "We were yelling and going crazy and nobody else was around. You really notice it when you take off your headset.”

For all the obstacles, there is this reality: The radiocasts need to be accurate, energized and attractive to those who can't watch the games. Or those — and there are many — who prefer the local announcers to the national guys on TV.

It becomes all about being a professional.

“The fans are missed terribly and all of us who covered the games want them to know that,” Wischusen says. "They take the atmosphere up 50 floors when they are there.

"Not being in the stadium, well, it will never replace being there, and it can’t."