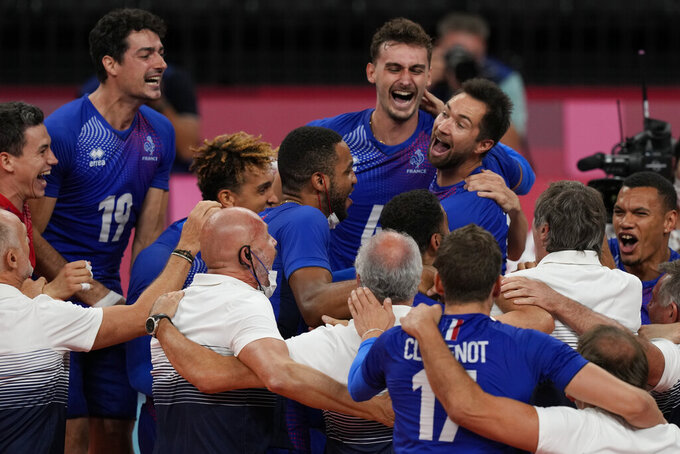 Team France celebrates their 3-0 victory over Argentina, at the end of a men's volleyball semifinal match, at the 2020 Summer Olympics, Thursday, Aug. 5, 2021, in Tokyo, Japan. (AP Photo/Frank Augstein)

TOKYO (AP) — The French players danced around the court, singing and waving towels.

They then threw coach Laurent Tillie in the air a couple of times before heading to the corner of Ariake Arena to sing along some more with the dozens of French officials at the near-empty venue.

This was a celebration a long time coming for French volleyball.

“It’s just pure happiness, pure joy, just an unbelievable feeling,” middle blocker Barthelemy Chinenyeze said. “I couldn’t even realize it. That gold medal is the biggest prize for volleyball. We made it to the top. Now we are at the top of the world for now.”

France had qualified for the Olympics four times before this year and made it as far as the quarterfinals only once in 1988.

But after a slow start that began with a 3-0 loss to the United States and a 2-3 record in pool play, the French knocked off Pool A winner Poland in a five-set quarterfinal before sweeping Argentina in the semis and beating the Russians in a dramatic final to earn gold.

Just when France seemed poised to blow the match, it mustered up enough energy to pull it out at the end. Jean Patry delivered a kill and an ace on back-to-back points to put the French ahead for good at 13-11.

Antoine Brizard then surprised the Russians when he sent a soft shot over the net instead of setting it to give France match point.

France won it 15-12 when Maxim Mikhaylov’s shot went wide, sending the French pouring onto the court in celebration.

“I had a good feeling today,” French star Earvin Ngapeth said through an interpreter. “But the Russians almost put some doubt in my mind. There might have been a little bit of doubt but we managed to stay strong. That made the difference in the tiebreak. We didn't give up. We kept believing in ourselves.”

This marked the first time a team that came into the Olympics without ever winning a medal in men’s volleyball went home with the gold since the U.S. did it in 1984 in Los Angeles.

It provided the perfect capper to the coaching career of Tillie, who took over the French team in 2012 and now is planning to retire.

“It’s a fairytale,” Tillie said. “It's been a fairytale since the beginning.”

France rallied after falling behind by four points late in the first set to jump out ahead of the Russians. The set turned when Dmitry Volkov was called for a center line violation with the Russians up 22-18.

Back-to-back aces by Brizard got the French even at 22 and they closed out the set 25-23 when Trevor Clevenot dug out an attack by the Russians and then converted a kill.

That momentum carried over to the second set and the French seemed in control until the Russians mounted a rally similar to the one that gave them gold in 2012. They became the only team ever to win gold after falling behind two sets that year against Brazil.

There would be no repeat.

The only other medal the Argentinians won in the sport came in Seoul in 1988 when they also beat Brazil for the bronze.

Argentina lost the bronze medal game in 2000 in Sydney to Italy in its only other appearance in the medal round.

“I can swear there’s nothing better than this," setter Matías Sánchez said. "It was a dream we were chasing and now becomes a reality. Finally our second medal.”

Brazil failed to medal for the first time since 2000.

On the women's side, the United States seeks its first gold medal ever on Sunday against Brazil. The Americans lost to Brazil in the gold medal game in 2008 and '12. Serbia faces South Korea for the bronze.