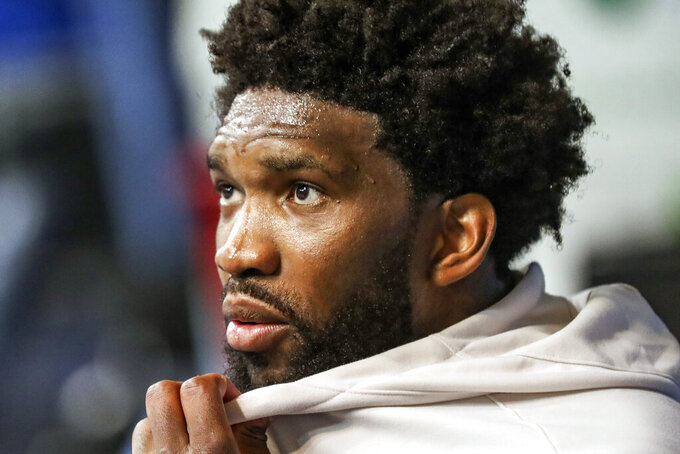 Joel Embiid sits for an ice bath after practice on the first day of Philadelphia 76ers NBA basketball training camp at the McAlister Field House on the campus of The Citadel in Charleston, S.C. on Tuesday, Sept. 27, 2022. (Heather Khalifa/The Philadelphia Inquirer via AP)

HENDERSON, Nev. (AP) — Joel Embiid has two choices: the red, white and blue of the U.S., or the blue, white and red of France.

France is still hopeful that Embiid — the reigning NBA scoring champion — will choose to wear its colors for the 2024 Paris Olympics even though he recently became an American citizen, national team coach Vincent Collet said Thursday.

Embiid, the Philadelphia 76ers star, may choose to play internationally for the U.S. or France, but not both. It was widely presumed that he would play for France at the Paris Games and possibly even next year’s Basketball World Cup in the Philippines, until Embiid revealed last week that he now has American citizenship as well.

“Now he has both nationalities, and he has to choose one basketball nationality, which is not the same,” Collet told The Associated Press. “So, that is a choice. Nobody can do anything to change it.”

Embiid told AP last week that it’s too early to think about a decision. By rule, he will eventually have to declare a choice to FIBA, the sport’s international governing body, if he decides that he wants to play at the Olympics or World Cup.

France is the reigning Olympic silver medalist and is planning to have a team featuring Rudy Gobert, Evan Fournier, Nicolas Batum — and, quite likely, top NBA draft prospect Victor Wembanyama — at the Paris Games. France’s plan is to essentially take what will be its Olympic roster to the World Cup next year.

Without Embiid, that French core has been extremely formidable. On top of the 2021 silver in Tokyo, France won bronze at the 2019 World Cup and silver again at this year’s European championships.

With Embiid, that group would figure to be even better. Collet said Boris Diaw, the general manager of the French national team, has been in contact with Embiid to discuss options.

“I know he met some of our players to discuss,” Collet said. “I think he should play with us. But we will see. We will respect his decision whatever it is."

Embiid was born in Cameroon and has held French citizenship. He has a Brazilian girlfriend — their son is American — went to high school in Florida and played college basketball at Kansas.

The five-time NBA All-Star and four-time All-NBA selection has spent his entire pro career with Philadelphia, averaging 26.0 points in his first six seasons and a career-best 30.6 points on his way to the scoring crown last season.