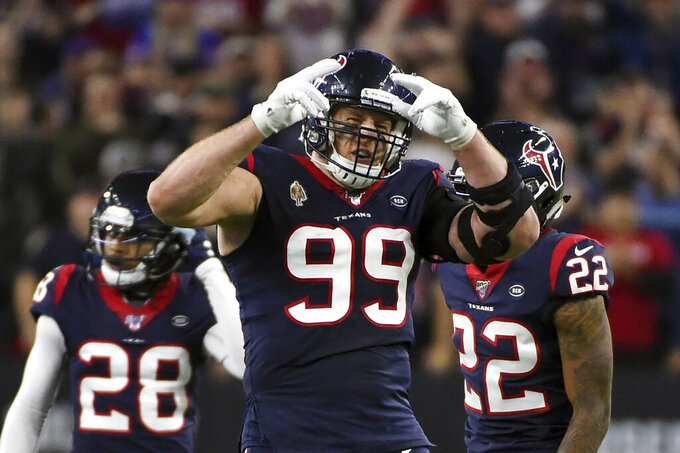 FILE - Houston Texans defensive end J.J. Watt (99) celebrates during the second half of an NFL wild-card playoff football game against the Buffalo Bills in Houston, in this Saturday, Jan. 4, 2020, file photo. J.J. Watt has agreed to a two-year contract with the Arizona Cardinals. The team announced the deal with the free-agent edge rusher on Monday, March 1, 2021. Watt was released last month by the Houston Texans. (AP Photo/Eric Christian Smith, File)

DENVER (AP) — Teams searching for an antidote to the high-octane offenses and mobile quarterbacks that dominate the modern NFL won't have to wait around for the draft.

Free agency this year promises a deeper pool of possibilities than usual because the league's lost revenues during the coronavirus pandemic in 2020 resulted in the first decrease in the salary cap in a decade.

“You’re going to see more veteran guys released for cap purposes than you would otherwise,” ex-NFL GM and Hall of Famer Bill Polian said after the league announced a salary cap of $182.5 million in 2021, an 8% reduction from last year.

Then, the league scuttled its annual scouting combine in Indianapolis, making it harder still for teams to evaluate the incoming class.

“In the draft, you’re just shooting from the hip because you just haven’t really spent any time around players,” former Bucs GM Mark Dominik said.

Society has turned to videoconferences and remote work over the last year, and the NFL is no different. With scouts unable to visit schools and do their usual vetting of players, personnel departments are relying on hour-long Zoom calls to get to know these prospects.

“It's just a lot more difficult to gauge character,” Dominik said. “So, that might just make somebody be a little bit more aggressive in free agency.”

While the veteran possibilities come with the caveat of more wear and tear, they also carry fewer unknowns, making the risk/reward equation easier to stomach.

“Guys are going to say, ‘I know who this guy is, as much as I want to build through the draft because I need to financially, especially this year,’” Dominik said. “That's part of the reason John Schneider said, ‘I’ll take Jamal Adams and I'll give away my draft picks.'"

The Seahawks' GM traded away multiple first-round picks as well as a third-rounder for the veteran safety before the 2020 season, leaving him with four selections this year, including just one pick in the first three rounds.

While teams will be scouring other teams' castoffs and cap casualties for savvy nickel backs, defensive tackles who can pressure the passer and three-down linebackers in free agency, Dominik said those who cash in the most and the soonest will share one trait in particular.

“I think the guys with speed are the guys that are going to find the biggest paychecks on defense, because it’s just such a fast game now that you have to be able to find ways to combat that,” he said.

“But if you can run, you can cover grass, you can get to the sideline or you can be disruptive, I think you have a better chance.”

As Broncos new GM George Paton prepared for his first foray into free agency after serving 14 seasons as Vikings GM Rick Spielman's right-hand man in Minnesota, he said there were two absolutes in today's game.

“In this league you need pressure and you need cover players,” he said. “You look at the good defenses around the league, teams can rush the quarterback and teams can cover. That is going to be a priority here.”

There's a lot of defensive backs available in the draft, which is chock-full of offensive linemen and wide receivers again. But there's no Chase Young or Nick Bosa in the 2021 class.

So the top edge rusher candidates are free agents led by the likes of Leonard Floyd and Shaq Barrett and maybe even Von Miller, who could command something like J.J. Watt's two-year, $31 million deal he signed with Arizona if the Broncos decide to release their Super Bowl 50 MVP to save $17.5 million in base salary.

“I think there’s an opportunity to get some help there if you’re willing to go out and dance and you have the room in this kind of an offseason,” Dominik said. “But I do think free agency is going to be a very fast train this year that you get paid early or you might get left at the station.”

Teams who miss out on the defensive difference-makers in free agency can turn toward the draft, but it’s hard to say how this year’s class will stack up against the NFL’s megawatt offenses.

“It’s a different kind of draft because we talk about a lot of names but some of these names didn’t play,” said ESPN draft analyst Mel Kiper Jr. “It’s a very complicated draft. I always say ‘mysterious-slash-complicated’ draft because it’s a lot of things that you normally know about players that this year you do not know."

“It’s probably one of the worst defensive tackle groups that we’ve had in the last decade,” Jeremiah said.

Linebacker, though, is another story, led by the likes of Penn State's Micah Parsons, Notre Dame's Jeremiah Owusu-Koramoah and Tulsa's Zaven Collins.

“You talk about being able to deal with all the speed, I love the linebacker group, off-the-ball linebackers," Jeremiah said. “I think there’s some guys that can really, really play with the way the game is right now.”