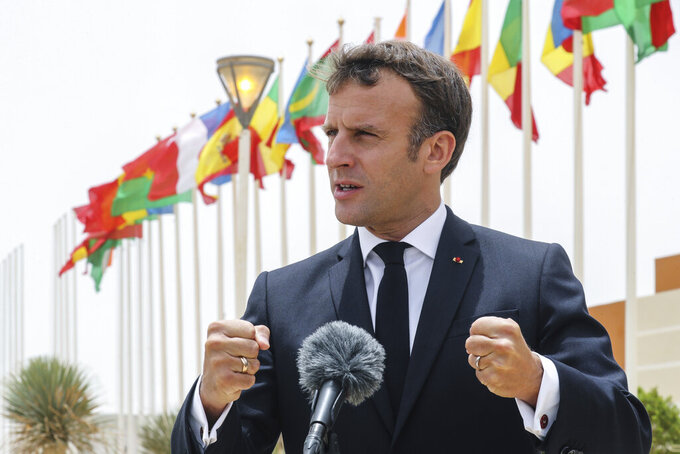 French President Emmanuel Macron speaks to the press upon arrival at Nouakchott Oumtounsy International Airport Tuesday June 30, 2020, in Nouakchott, to attend a G5 Sahel summit. Leaders from the five countries of West Africa's Sahel region, Burkina Faso, Chad, Mali, Mauritania and Niger, meet with French President Emmanuel Macron and Spanish Prime Minister Pedro Sanchez in Mauritania's capital Nouakchott on Tuesday to discuss military operations against Islamic extremists in the region, as jihadist attacks mount. The five African countries, known as the G5, have formed a joint military force that is working with France, which has thousands of troops to battle the extremists in the Sahel, the region south of the Sahara Desert. (Ludovic Marin, Pool via AP) 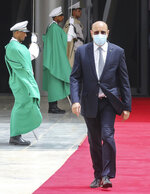 DAKAR, Senegal (AP) — Leaders from the five countries of West Africa’s Sahel region — Burkina Faso, Chad, Mali, Mauritania and Niger — on Tuesday called for intensifying counter-terrorism operations supported by the French military that have already seen successes in the recent months despite growing jihadist attacks in the region.

The heads of state from the five Sahel countries said the stability of the region below the Sahara Desert remains challenged by persistant attacks, a deteriorating security situation in Libya and the COVID-19 pandemic, and renewed calls for the cancellation of external debts as they deal with the pandemic.

The statements came after meetings between the heads of states Tuesday with French President Emmanuel Macron and Spanish Prime Minister Pedro Sanchez in Mauritania’s capital Nouakchott to discuss military operations against Islamic extremists in the region.

The five African countries, known as the G5, have formed a joint military force that is working with France, which has 5,100 soldiers in the Sahel to help combat the still growing attacks. France first sent troops to the Sahel in 2013 when it helped to push al-Qaida-linked militants from their strongholds in Mali’s north.

But in recent months extremist groups linked to both al-Qaida and the Islamic State become more assertive, pushing further south into Niger and Burkina Faso, increasing attacks and taking control of more territory.

Thousands more soldiers are meant to be deployed as part of the G5 Sahel Joint Force, but this force is has not yet become fully operational due to the lack of funding and equipment.

“We are all convinced that victory is possible in Sahel,” Macron said in a news conference alongside other heads of states.

Macron said his first trip outside Europe since the beginning of the new coronavirus crisis aimed at showing “solidarity” toward the African continent. This was also Sanchez’ first trip abroad since a strict lockdown was adopted in Spain in mid-March to slow down the spread of the pandemic.

The French and African military force has made major gains since the last summit in Pau, France, in January, when it was decided to focus on eliminating the growing threat of the Islamic State in the Greater Sahara along the tri-border region of Burkina Faso, Niger and Mali. Among the successes has been the killing of the head of al-Qaida in the Islamic Maghreb on June 3 in the Tessalit region.

“France will be there as long as its presence is wanted and requested by the Sahel states as they consider their people’s security is threatened ... and that our role is useful,” Macron said. He earlier praised the greater involvement of other European countries in the region.

Tuesday’s summit was called to set new milestones and raise the operational levels of the armies, as the victories remain fragile, said organizers. Counter-terrorism operations along the Burkina Faso, Niger and Mali tri-border region will continue, and the heads of state of the G5 also called for increased military engagement by the international community. They expressed gratitude for the support provided by France, the U.S. and the United Nations mission in Mali.

Operation Takuba, which will be a force of European special forces soldiers, would deploy in the summer of 2020, according to the G5 statement, along with a brigade from Britain in support of the Mali U.N. mission and 3,000 African Union soldiers.

There is political instability in Mali and Burkina Faso and the COVID-19 crisis has also substantially affected the already very vulnerable Sahel countries who are hoping for increased financial support as wealthier countries face the same pandemic.

Mauritania’s President Mohamed Ould Ghazouani urged richest countries to cancel the poor nations' debt obligations. “The debt issue arises even more with the new situation that results from the pandemic and its consequences. The debt service burden is unbearable.”

Recurrent jihadist attacks and inter-communal violence killed at least 4,000 people in 2019 in the Sahel, five times more than in 2016, according to the United Nations.

In Burkina Faso, the threat has grown with fighting spreading from the country’s north to the east and southwest regions. Areas that were once accessible are cut off. Djibo town in the Sahel has been under siege by jihadists for weeks, preventing aid from reaching civilians, according to workers for humanitarian groups and locals in the area.

There’s also been a rise in extrajudicial killings and revenge attacks by the army and local defense groups, targeting people allegedly supporting the jihadists, according to Human Rights Watch. The jihadists have also increased attacks on volunteer fighters helping the military.

On Tuesday, the G5 Heads of State agreed that “allegations of abuses by elements of the defense and security forces will be investigated and, if the facts are proven, of exemplary sanctions,” according to the final statement.

Burkina Faso’s army, which was already ill-equipped and struggling to stem the violence, has been hampered by the coronavirus. While it’s continued basic operations in the north and along the border with Mali and Niger, the military has no personal protective gear or other preventive supplies and few trained medical staff, according to internal foreign embassy cables seen by the AP. The “vast majority” of the military remain in their barracks, as a protection measure against the virus, said the report.

Despite gains along the border region, analysts say there’s been no progress in terms of addressing the issues driving the conflict.

“The progress has been mixed at best. The French had some tactical victories along the border, but not much has been done by local or international military to create long lasting stability or warrant any kind of victory,” said Flore Berger, a Sahel research analyst at the Institute for Strategic Studies.

Strengthening the regional G5 force is also critical at this time, especially as the U.S. has yet to make a decision on whether it will scale back military presence in the area.

The next summit will be held in 2021 in a Sahel country.