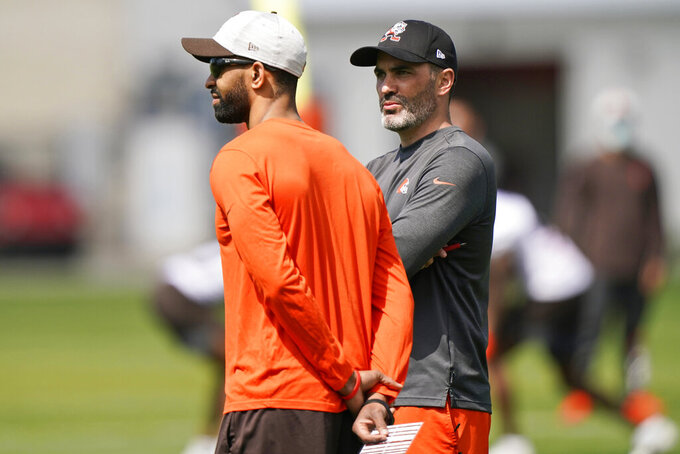 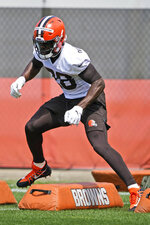 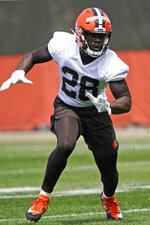 BEREA, Ohio (AP) — Around the time rookie linebacker Jeremiah Owusu-Koramoah was being shown how to drop into pass coverage, Browns coach Kevin Stefanski got to drop something as well.

“It felt pretty good,” the NFL's reigning Coach of the Year said Friday after the team's first rookie minicamp practice. "There were some people I didn’t realize what they looked like.”

Stefanski, who guided the Browns to a playoff berth in his first season, was already on the field on a gorgeous spring afternoon observing the workout when he got word that the league had amended some of its strict virus protocols.

The league sent a memo to its 32 teams outlining the new policies, which state that anyone who is fully vaccinated is not required to wear their mask at the club's facility — indoors or outside.

Being mask-free was a new sensation for Stefanski, who spent his first season steering his team around so many virus-related obstacles only to test positive in the days leading up to Cleveland's playoff game against Pittsburgh. He watched the game on a TV while isolated in his basement.

Not only did Stefanski feel liberated without his mask, it was also refreshing to have on-field practice after the virtual 2020 offseason.

"I get to look out my window and I see these beautiful fields, and they look a lot better when there are players and coaches out there,” he said.

Stefanski was excited to see the team's eight draft picks along with some free agents and players getting tryouts.

With just 18 players on the field, coaches were able to give extra attention to the newbies, who made some expected mistakes.

“A lot of them are swimming as you can imagine with some of the mental things that we are putting on their plate, but they are very coachable,” he said.

One of the players getting plenty of hands-on instruction was Owusu-Koramoah, Notre Dame's versatile All-American who fell to the Browns in the second round

Before practice, Owusu-Koramoah said he's not concerned about a heart condition that may have caused some teams to pass on him in the draft.

Cleveland traded up in the second round and used the No. 52 overall selection on Owusu-Koramoah, who had been projected to go in the first round.

"It’s not an issue. It’s not something I’m worried about.”

Browns general manager Andrew Berry has said he was comfortable with Owusu-Koramoah’s medical report when drafting him. Owusu-Koramoah said he spoke Thursday to team doctors, who don't see any concerns with his health.

Cleveland envisions the 21-yeer-old Owusu-Koramoah having an impact with a defense that has been completely overhauled through free agency and the draft.

The Browns could have nine new starters on defense before their season opens in Kansas City on Sept. 12.

Owusu-Koramoah's speed will allow coordinator Joe Woods to use him in multiple roles.

“Playing along with a guy like that, who is super versatile and can cover tight ends and receivers and then come down and hit you, it’s going to be so much fun to play with a guy like that,” Newsome said. "You can just tell by the way he talks that he’s a natural born leader, so I think we’ll work very well together.”

NOTES: LB Tony Fields II did not practice after suffering a recent foot injury. Stefanski said the fifth-round pick from West Virginia will be out “a few weeks” but that the injury is not a long-term concern. ... Newsome has taken note of the workout videos All-Pro DE Myles Garrett has been posting on social media. “He's a freak,” Newsome said. “He's setting the bar. Whenever we get them pads on, he's going to be ready to go. How hard he works kind of shows me how hard I need to work." ... WR Anthony Schwartz showed off bursts of his Olympic-caliber speed, but dropped a couple of balls in drills. ... Former Ohio State WR Johnnie Dixon is one of three players getting a tryout this weekend.