Frustration mounts for US men's volleyball after 2nd loss 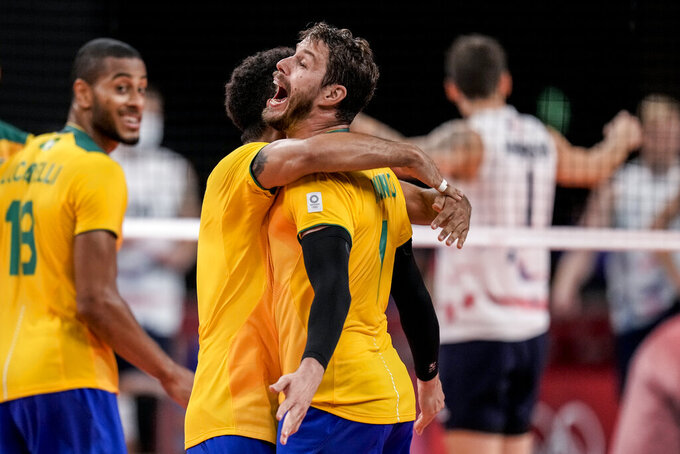 TOKYO (AP) — A serve at a key moment going into the net. Blocking strategy that was poorly executed. Attacks that couldn't get through Brazil's defense at the net.

Those kinds of mistakes left the usually calm U.S. men's volleyball coach John Speraw bewildered on the sideline and knowing the Americans can ill afford any more setbacks following a four-set loss to Brazil in pool play on Friday.

“I was pretty frustrated today,” Speraw said. “We really weren’t executing and that can get frustrating when we’re not executing. That’s something that I expect. If we say we’re going to do this, we need to go do that."

The loss leaves the U.S. with a 2-2 record with one match remaining in pool play on Sunday against Argentina. Defending gold medalist Brazil is 3-1.

“I don’t think the match was really one-sided,” American Matt Anderson said. “They got a couple of runs here and there. But I think we were able to shut down their runs early on the first set, and that gave us a chance. But in the second, third and fourth, they put aside a few strings of points together that were hard to come back from.”

The U.S. can clinch a spot in the quarterfinals with a win against Argentina, giving it a chance to win another medal after getting bronze five years ago in Rio de Janeiro. A loss would likely send the Americans home after pool play for the first time since 2000, when they lost all five matches in Sydney.

A key aspect in the loss to Brazil again was the serves. While Brazil managed seven aces and just eight service errors, the Americans struggled to keep their serves in.

The U.S., which came into the day with the most faults in the tournament (62), committed 21 more against Brazil, with several coming at key times. Two came on set points in the first set that the Americans were able to overcome, but others ended up killing rallies in the later sets as the U.S. tried to put together some scoring runs to erase deficits.

“I think our servers have the ability to be the best serving team in the world,” Anderson said. “Honestly, I do. We have guys who can absolutely rip the ball and guys with great variety who can move the ball around. Hats off to Brazil today. I think when we served really hard today, they defended those balls and passed it really well.”

Speraw said it is always a delicate balance whether or how aggressive to be on serves, knowing that not going for it can create easy chances for the opponent.

Anderson said there's no reason to let up just to avoid errors.

“We have to be aggressive,” he said. "Giving teams free balls is not a way to win at the Olympics.”

In other results, Canada swept winless Venezuela for its second victory in four matches in Pool A. Poland improved to 3-1 with a win over host Japan, which fell to 2-2. Italy is also 3-1 after beating Iran in four sets, handing the Iranians their second loss.