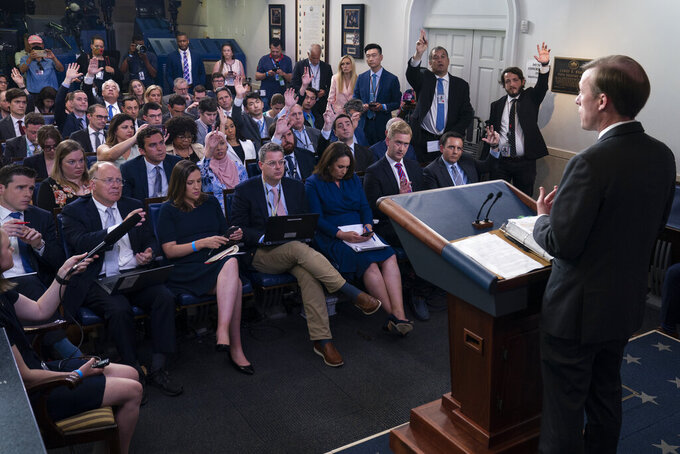 WASHINGTON (AP) — The White House briefing room on Monday might have been a fire marshal's nightmare.

For the first time in 449 days, reporters could cram into every seat for the daily briefing. Coronavirus restrictions had kept one of the most recognized rooms in the U.S. government almost empty. But mass vaccinations allowed reporters to first doff their masks on May 13 and then nearly a month later to gather in a pack of raised hands, shouting, hard-eyed stares and the occasional grimace.

Forty-nine journalists sat elbow-to-elbow in blue seats, while others stood on the edges. The loudspeaker before the briefing told reporters not to block the aisle, but no one budged.

The briefing marked something of a surreal return to business as usual for Joe Biden’s presidency. The president had vowed to overcome the pandemic, and one of the consequences of any success on that front inevitably was going be more questions from more reporters. Monday was proof of that as the hourlong briefing ran to roughly 58 sets of questions.

The questions covered a wide range — a sign that there are still plenty of tensions, emergencies and unknowns to consume any administration's time. The topics included Russia, China, Afghanistan, cyberattacks, infrastructure, voting rights, vaccinations and Supreme Court decisions. Presidents might campaign on policies and promises, but most administrations must deal with a daily degree of chaos, sometimes of their own making.

National security adviser Jake Sullivan also took the podium at Monday's briefing to preview the president's first foreign trip, which will begin this week with a Group of Seven summit meeting in the United Kingdom. Psaki then faced a barrage of questions that was different from past briefings because so many hands were raised and time for follow-ups was limited.

How did Biden know he could trust Russian President Vladimir Putin at their upcoming meeting? How would Biden work with West Virginia Sen. Joe Manchin on voting rights? What was the status of infrastructure talks? How could ransomware attacks be prevented? How would the United States prevent terrorist attacks after U.S. troops withdraw from Afghanistan? Would infrastructure aid be going to Brazil? Why had Biden not done more to commemorate the anniversary of the D-Day landing?

Not every reporter got to ask a question. Not every joke from Psaki got the response she expected. Upon noting that Biden had gotten together with former President Barack Obama to discuss enrollment in “Obamacare,” Psaki referenced the 1978 Peaches & Herb song “Reunited” and got only a few chuckles.

“Even in a full room, no laughs,” Psaki said.