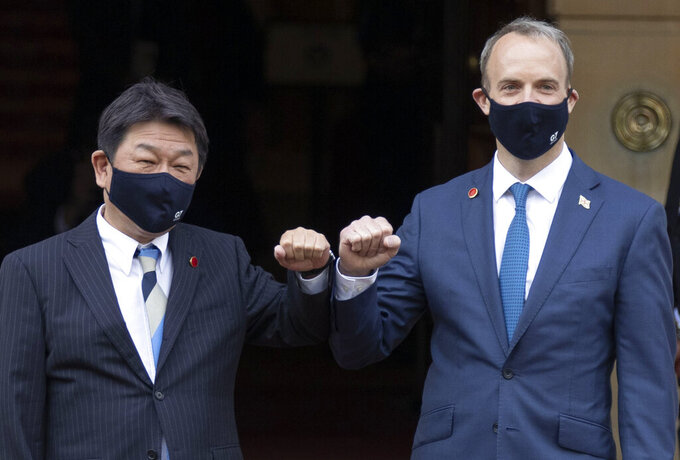 LONDON (AP) — Foreign ministers from the Group of Seven wealthy industrialized nations gathered Tuesday in London for their first face-to-face meeting in more than two years, with the issue of whether to challenge or coax a surging China high on the agenda.

Host nation Britain is keen to show that the rich countries' club still has clout in a fast-changing world, and has warned that the increasingly aggressive stances of Russia, China and Iran pose a challenge to democratic societies and the international rule of law.

Blinken said engaging with China “from a position of strength ... means actually working with allies and partners, not disparaging them.”

“It means leaning in and engaging in the vast array of multilateral and international organizations because that’s where so many of the rules are made. That’s where the norms are shaped," he said. “And if we’re not leaning in, we know that Beijing is likely to be trying to do so in our place.”

At the two-day meeting, top diplomats from the U.K., the United States, Canada, France, Germany, Italy and Japan also were to discuss the military coup in Myanmar, the humanitarian crisis in Syria, the Tigray crisis in Ethiopia and the precarious situation in Afghanistan, where U.S. troops and their NATO allies are winding down a two-decade deployment.

The U.K. Foreign Office said the group would also discuss “Russia’s ongoing malign activity,” including Moscow's earlier troop buildup on the border with Ukraine and the imprisonment of opposition politician Alexei Navalny.

While the G-7 members likely can agree in broad terms to condemn Navalny's imprisonment or Beijing's repression of the Uyghur minority in Xinjiang, there are differences over how to relate to countries such as China and Russia that will have to be smoothed out in any final communique on Wednesday.

Asked what message the group would send to authoritarian regimes, Raab said the G-7 believed “in keeping trade open. We believe in standing up for open societies, for human rights and democracy. We believe in safeguarding and promoting public good.”

The G-7 ministers will also try to agree on a way to make coronavirus vaccines available around the globe in the long term. But for now, wealthy countries are reluctant to give up precious stocks until they have inoculated their own people.

The ministers wore face masks and greeted one another with arm and elbow bumps as they arrived at Lancaster House, a grand former stately home in central London. Plastic screens between participants and on-site coronavirus tests were among measures intended to make the venue COVID-secure.

The British government, which holds the G-7 presidency this year, invited the foreign ministers of Australia, India, South Korea and South Africa to join parts of the meeting, including Tuesday evening's formal dinner. The guest list was intended to underline the G-7’s support for democracies, as well as the U.K. government’s attempts to build stronger ties with Asia in the wake of the country’s departure from the European Union.

Britain's Conservative-led government hopes the resumption of in-person G-7 meetings — after more than a year of disruption by the coronavirus pandemic — will give the group a jolt of energy and bolster attempts to forge a post-Brexit “Global Britain” role for the U.K.

Prime Minister Boris Johnson is set to host the other G-7 leaders at a summit in Cornwall, England, in June.

Opposition politicians and international aid organizations say the goal of Britain playing a bigger role in world affairs is undermined by the government's decision to slash its foreign aid budget from 0.7% of gross domestic product to 0.5% because of the economic hit from the pandemic.

Raab said the aid cuts were a “difficult decision” but insisted Britain would become “an even greater force for good in the world.”