'Get your popcorn ready:' Jackson hopes to shine for Eagles 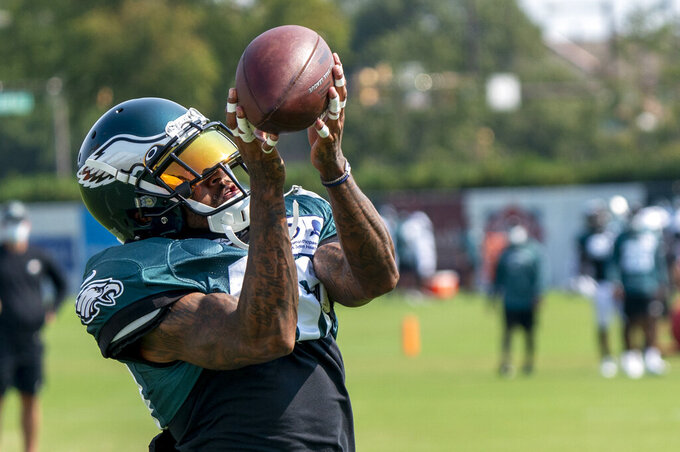 DeSean Jackson hasn't done much on a football field since making eight catches for 154 yards and two touchdowns in the Philadelphia Eagles' 2019 season-opening victory against Washington.

A core muscle injury the next week sidelined him for most of the rest of the season and led to surgery. He's back feeling healthy, and while coach Doug Pederson hopes Jackson is a positive mentor for Philadelphia's young receivers, the 33-year-old is ready to fly Week 1 against Washington, his team for three seasons earlier in his career.

"I know what I'm capable of doing, and I got a lot of juice left in me, so for everybody sitting at home, get your popcorn ready," Jackson said, channeling Hall of Fame receiver Terrell Owens. “I'm going to show it on Sunday.”

Jackson made headlines off the field this offseason for sharing anti-Semitic posts on social media and apologized Wednesday. Back in uniform, he's ready to make the impact Philadelphia was hoping for when it brought Jackson back more than a year ago.

“The aftermath of everything has been a long process,” Jackson said Wednesday, speaking to reporters for the first time since the incident. “I’ve been just using the time to educate myself and really just man up to the actions I took and just educate and learn from it.”

Jackson is by far the most senior member of the Eagles receiving corps, older than Alshon Jeffery (30), Greg Ward (25) J.J. Arcega-Whiteside (23) and rookie Jalen Reagor (21). With Jeffery and Reagor banged up, the opportunity could be there for Jackson to flash some vintage speed.

“He’s got a different type of speed,” said Washington cornerback Ronald Darby, who played the past three seasons with the Eagles. “He knows how to disguise his running to make it seem like he’s going to sit down but keep winning. He’s good at doing that and getting behind defenders and getting that extra step. He’s in his 30s, so I couldn’t even tell you how he was in his mid-20s.”

Washington got that version of Jackson, who surpassed 1,000 yards receiving twice in three seasons with the team and only didn't on year because of injury. Staying healthy is now his focus, and Jackson added stretching and yoga regimens to his preparation. He is sticking to a plan laid out by trainers and strength coaches.

“You've got to be able to take care of your body,” Jackson said. “I think we're all on one page, which is to keep me healthy and figure out how we can manage my plays and manage my rest so I can be playing in December and January.”

Here are some things to watch on Sunday:

Eagles quarterback Carson Wentz hasn't lost to Washington since his rookie year in 2016, and he's coming off a season in which he set the franchise record for yards passing with 4,039. But he won't face a rookie QB on the other side this time.

Dwayne Haskins earned the nod from first-year coach Ron Rivera after starting seven games as a rookie and throwing for seven touchdowns and seven interceptions. The 15th overall draft pick in 2019 was 19 of 28 for 261 yards and two touchdowns in Week 15 against the Eagles and feels he has made a big leap since.

“That game last year was just me getting my feet, I would say, damp — not even wet,” Haskins said. “I’m trying to build on those last two games of the season where like it wasn’t easy, but felt a lot more comfortable, way smoother.”

The Eagles have several new faces in the secondary, including three-time Pro Bowl cornerback Darius Slay and nickel cornerback Nickell Robey-Coleman. Jalen Mills has moved to safety to replace Malcolm Jenkins. Avonte Maddox is moving from the nickel spot to start outside opposite Slay.

Backup cornerbacks Rasul Douglas and Sidney Jones were among the final cuts and Darby, a starter on Philadelphia’s Super Bowl championship team three years ago, left for Washington in free agency. Safety Rodney McLeod is the only returning starter in the same spot.

“We’re not going to grade on the curve for this game,” defensive coordinator Jim Schwartz said. “It’s going to go down as a win or a loss. That’s the only thing that we really concern ourselves with. There is nobody being graded on the curve because they’re new to a position.”

Since taking over Washington's football operations in January, Rivera has had to deal with adjusting during a pandemic; owner Dan Snyder finally agreeing to change the team's name; former employees alleging sexual harassment before he arrived; and finding out he has a form of skin cancer.

After no in-person offseason workouts and a training camp that flew by, he's ready for his first game as Washington's coach.

"Finally," Rivera said. “I promise you that will be my first thought when that ball gets kicked. Finally, we’re playing football. I hope it continues. I really do. To me, when that happens that’s going to signal some normalcy in our lives and in my life, for sure."

FedEx Field is one of the NFL stadiums that won't allow fans for at least Week 1 because of the COVID-19 pandemic. Each team prepared for this situation, piped-in crowd noise and all, but the Eagles won't change their entire play-calling philosophy as a result.

“We still have to be smart with our cadences,” Pederson said. “We’ve got to mix things up, obviously, communication. A lot of nonverbal, probably even more so, having more nonverbal communication just because of having the lack of crowd noise so that teams don’t pick up on things that we’re trying to do offensively and defensively.”