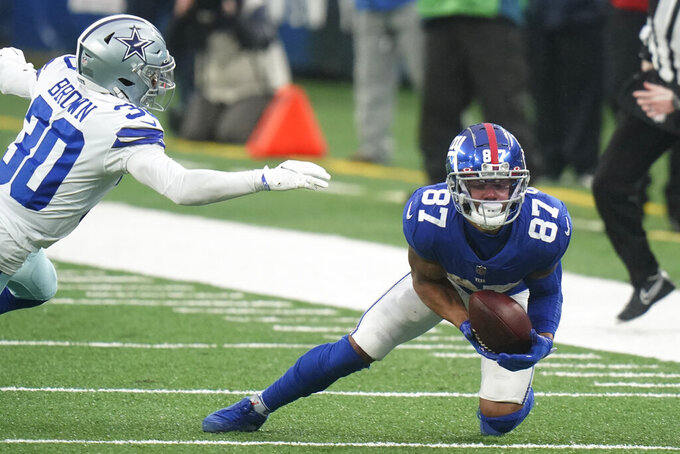 After starting 0-5 and winning one of their first eight games in a season overshadowed by a pandemic and games played in near-empty stadiums, the Giants (6-10) were lucky to have a shot at winning the NFC East on Sunday night.

It all came down to the Eagles beating Washington (7-9) in Philadelphia. The Eagles had a shot at helping the Giants until coach Doug Pederson pulled quarterback Jalen Hurts in the fourth quarter to give third-stringer Nate Sudfeld some snaps.

Washington won 20-14 to capture the division and end the Giants' hopes for their first playoff berth since 2016.

“I was angry because I know that we had 16 opportunities to make it happen,” safety Jabrill Peppers said Monday. “Any time you put your destiny in another man’s hands, you know, it simply doesn’t bode well for you.”

When asked about the game, Judge initially said it was something for the Eagles to talk about. He went on to talk about the season and the sacrifices the players, coaches and their families made. The more he talked, the more he said.

“To disrespect the effort that everyone put forward to make this season a success for the National Football League, to disrespect the game by going out there and not competing for 60 minutes and doing everything you can to help those players win, we will never do that as long as I’m the head coach of the New York Giants,” Judge said.

While six wins is not a lot, the Giants came a long way in a season that was held without offseason training activities, minicamp and had a shortened training camp with no preseason games.

A former Patriots special teams coordinator, the recently turned 39-year-old Judge and his staff took over a team that won 12 games in the past three years. They installed everything virtually until hitting camp in August.

Judge got what he wanted: a hard-nosed, well-prepared team. The Giants were in most of their games, and lost five by eight points or less, including four times by four points or less.

“We didn’t to make the playoffs, but I think we’re trending upward,” center Nick Gates said. “Joe Judge is doing a really good job changing the culture in this place. And, you know, everything is trending upward.”

After one season, Judge is clearly in control.

Early in the season, first-round draft pick Andrew Thomas showed up late for a meeting before a home game against Washington and did not start at left tackle.

Veteran receiver Golden Tate complained on national television about not having enough passes thrown in his direction after catching a touchdown against Tampa Bay. He was benched the following weekend.

Before the bye week in November, offensive line coach Marc Colombo argued with Judge when told Dave DeGuglielmo was being brought in as a consultant. Colombo was fired the next day and “Gugs” took over.

It reminded many of something Super Bowl champion coaches Tom Coughlin or Bill Parcells might have done. The Giants' hopes Judge reaches the same heights.

Coming into the season, Daniel Jones, Saquon Barkley and the offense were supposed to be carry the team. It never worked out that way for new coordinator Jason Garrett.

Barkley, the 2018 NFL Offensive Rookie of the Year, was lost for the season in the second game with a major knee injury. Jones struggled early playing behind a rebuilt offensive line, and points were hard to get. New York finished with 280 points, 31st in the league behind the Jets' 243.

Garrett's future is uncertain. He may want a head coaching job or Judge might want someone else calling the plays.

The defense under coordinator Pat Graham was the surprise. He inherited one of the NFL's worst units and finished the season ranked 12th, including 10th against the run.

Defensive end Leonard Williams had a career year with 11 1/2 sacks. Cornerback James Bradberry gave New York a shutdown cover man, and inside linebacker Blake Martinez was a tackling machine with 151.

The offensive line came a long way despite seeing Colombo fired in November.

The unit finished with two rookies on the left side, Gates playing center for the first time in his career, and two veterans on the right side: guard Kevin Zeitler and tackle Cam Fleming. Rookie tackle Matt Peart also showed promise at times.

Thomas overcame early struggles against outstanding players and played well. Shane Lemieux stepped in for Will Hernandez after the left guard tested positive for COVID-19. He never lost the job and Hernandez become the odd man out.

This unit, which gave up 50 sacks, is only going to get better .

General manager Dave Gettleman will turning 70 next month and one has to wonder how much longer he wants to do this.

Hiring Judge, the team's improved play, recent good drafts and making the trade with the Jets for Williams last season and then franchising him are all positives.

Knowing Gettleman, he would never walk away until the job of making the Giants a yearly contender is done. However, he beat lymphoma in 2018 and it's got to be tough working in an environment threatened daily by COVID-19. If he leaves, health concerns might be the reason.

FREE AGENCY AND THE DRAFT

The Giants have $6 million in cap space. They could create room by cutting tackle Nate Solder, who opted out of this season; Zeitler, who has one year left on his contract; and Tate, who had an up-and-down season.

New York has the 11th pick in the draft. The Giants need a pass rusher, a cornerback and a deep threat.