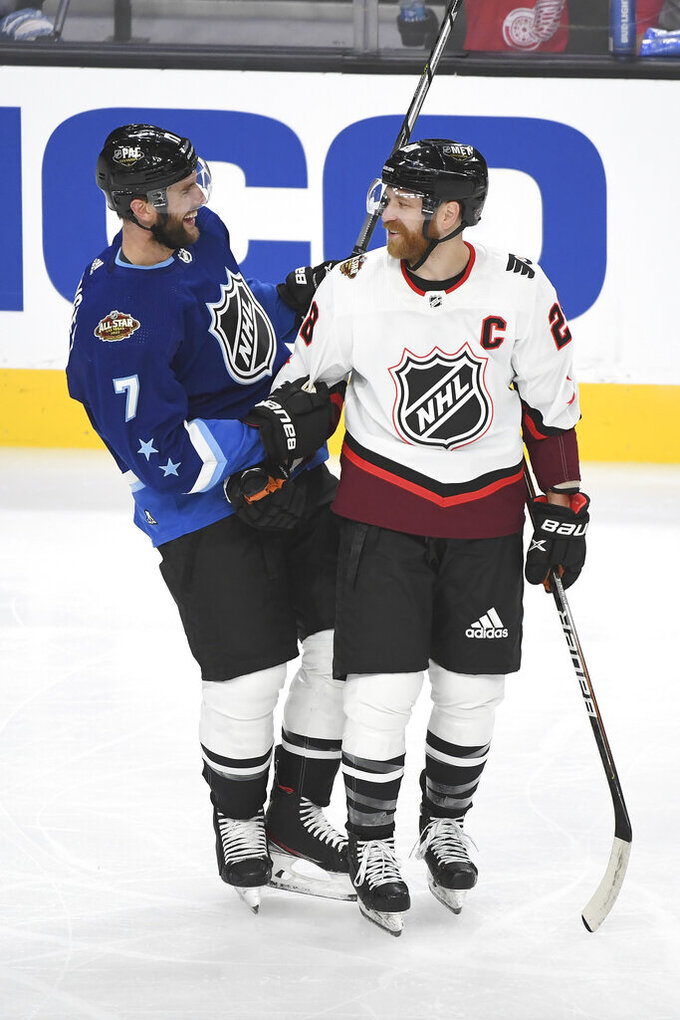 LAS VEGAS (AP) — If any hockey executive is somehow still uncertain whether Claude Giroux can deliver on the biggest stages, the Philadelphia captain's MVP performance in the NHL All-Star Game demonstrated his skills under pressure one more time.

Giroux scored three goals and the Metropolitan Division beat the Central Division 5-3 on Saturday in the final 3-on-3 match to win the NHL All-Star Game.

Giroux excelled under the bright lights as he nears a critical moment in his career: It’s well-known around the NHL that the 34-year-old star could be on the move before next month’s trade deadline after spending his entire career with the Flyers.

“I’m not going to think about this right now,” Giroux said. “Just enjoy the weekend. There’s a lot of things to figure out, but that’s for another day.”

The seven-time All-Star won his first MVP award with two goals in the final and another in the semifinal. Giroux also picked up the $1 million check shared among the winning players as the captain of the Metropolitan squad — a job he got at late notice in place of Alex Ovechkin, who tested positive for COVID-19 earlier in the week.

“It's funny how everybody was just on the same page today, when we had never played together before,” Giroux said.

New Jersey’s Jack Hughes, at 20 the youngest All-Star, also scored three goals for the Metropolitan team in the All-Star extravaganza's first trip to Las Vegas, which has become a major stage for hockey's top league since the expansion Vegas Golden Knights entered in 2017.

Giroux clearly took the All-Star showcase seriously, even if he was thinking more about a relaxing weekend with his family than his NHL future. After 985 career games in Philly, Giroux is an asset that could be cashed in by Philadelphia before he hits unrestricted free agency this summer.

“Anytime you represent your team, it's been an honor to put that jersey on," Giroux said. “For 14 years, it's been a lot of fun, and to represent that team is great.”

Carolina’s Frederik Andersen was the standout goalie, allowing just three goals and picking up an assist.

After a one-year hiatus due to the coronavirus pandemic, the NHL’s midseason showcase returned with the 3-on-3 tournament format introduced in 2016 and employed in the previous five All-Star events.

Hughes scored two goals for the Metropolitan team in its 6-4 win over the Pacific in the first semifinal. Alex DeBrincat and Jordan Kyrou then got a pair of goals apiece in the Central's 8-5 win over the Atlantic in the second semifinal.

The Pacific's loss disappointed a home crowd that wanted to cheer on its three Golden Knights All-Stars in the final. Vegas coach Peter DeBoer kept the event in perspective — and even confirmed that Las Vegas nightlife might have played a role in any sluggish performances by the world's greatest hockey talents.

“We got off to a slow start,” DeBoer said. “That was probably due to late-night Vegas activities last night, but we eventually got into the game. ... I'll be honest with you, I'm a little hung over today. I'm not going to lie to you. Yesterday I was fully focused on the skills (competition), and there was some excellent stuff, but today is a little bit foggy for me.”

Washington first-time All-Star Tom Wilson scored for the Metropolitan team on the game's first shot just 13 seconds after the opening faceoff, thoroughly annoying the Vegas crowd. Sin City has booed Wilson at every opportunity since his late hit on Vegas' Jonathan Marchessault in the 2018 Stanley Cup Final eventually won by the Caps on the T-Mobile Arena ice.

Wilson's goal was the second-fastest to begin an All-Star Game under any format, topped only by Rick Nash's 12-second goal in 2009.

“I actually like it,” Wilson said. “I think it's all in good fun. We have great memories in this rink.”

Hughes got his third goal on a breakaway during the first period of the final. His development into a point-a-game scorer in his third NHL season has been one of the winter’s few bright spots for the last-place Devils.

“The first game was pretty sleepy, so it's good we got that one,” Hughes said. “By the second game, guys were dialed in and working hard.”

The whole weekend had a distinct Vegas flavor. Club favorite Zedd was the DJ for player introductions while skaters dressed as Elvis and Frank Sinatra traversed the rink. Machine Gun Kelly also performed on the ice before the final.

The All-Star weekend was scheduled for Vegas partially because the NHL wanted its top players on the West Coast so they could fly directly to the Beijing Olympics afterward, but the coronavirus pandemic forced the league to skip the trip.

The Olympic gap in the NHL schedule has already been filled by make-up games for some of the 105 dates that were postponed by virus woes. The league has two games on Monday with seven more on Tuesday, and NHL games are scheduled for every day of the Beijing Games.