GOP delegates in Virginia to choose nominee for governor 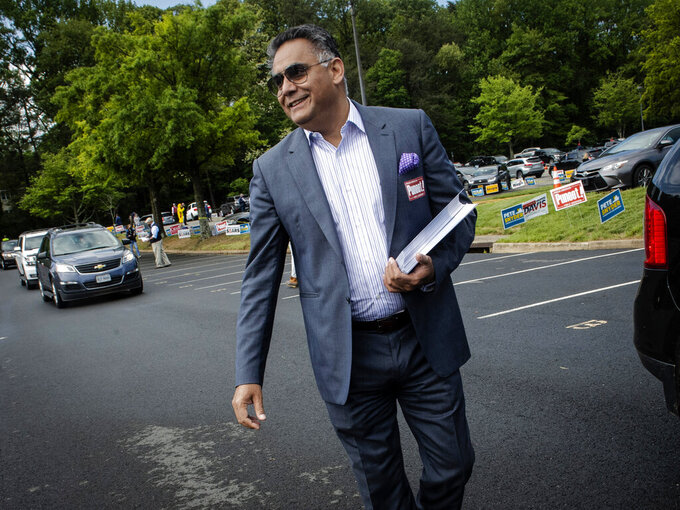 Puneet Ahluwalia, candidate for Lt. Governor, works the line of cars during the Virginia GOP drive-thru primary to select candidates for the 2021 general election, Saturday, May 8, 2021, in Annandale, Va. (Bill O'Leary/The Washington Post via AP)

ANNANDALE, Va. (AP) — Tens of thousands of Virginia Republicans, sometimes waiting in long lines of cars, cast ballots Saturday to choose nominees for governor and other statewide offices at a drive-thru nominating convention.

The Republican Party held what it's calling an “unassembled convention” on Saturday to select its nominees in this year's race for governor, lieutenant governor and attorney general.

Republicans haven't won a statewide race in Virginia since 2009.

Virginia is the only state with an open-seat gubernatorial contest this year, and the race will be closely watched as an early indicator of party strength heading into the 2022 congressional elections.

Four candidates — Amanda Chase, Kirk Cox, Pete Snyder and Glenn Youngkin — all have a shot at winning the nomination as no clear favorite has been established. Three other candidates — Sergio de la Pena, Peter Doran and Octavia Johnson — were considered long shots.

Youngkin campaigned the entire day at one of the largest polling sites, Northern Virginia Community College in Annandale.

“We're seeing this coming together of Virginians, and that's so encouraging,” said Youngkin, his voice slightly hoarse from the day's campaigning as crowds flocked to the convention. “Republicans want to be engaged. People want to participate. There's an absolute movement afoot.”

Chase, who voted amid long lines at the Fulghum Center in Midlothian, expressed concern about the instructions on the ranked-choice ballot. She suggested to her voters that they fill in her name across the ballot in all seven slots, but the ballot instructions warn that doing so could result in a spoiled ballot.

Chase said she’s received assurances from party leaders that such ballots will be counted. But, she said, her supporters “just don't trust anything about this process. They’re very skeptical, very leery,” she said.

Chase and other candidates prevailed on the party to change its procedures for counting ballots. The party agreed and is now using a system that provides greater transparency to the campaigns but will take longer to complete.

Youngkin said he’s confident that the count will be accurate. He is one of the candidates who prevailed on the party to use paper ballots instead of a software system that he and other candidates believed was untested.

“I’d much rather it be slower” if it ensures transparency and accuracy, he said. “We’re supposed to be the party of election integrity.”

In Fairfax County, cars backed up onto Little River Turnpike and wound through nearly a mile of side streets on the Annandale campus of Northern Virginia Community College on Saturday morning, waiting to cast ballots as they ran through a slow-motion gauntlet of pamphleteers and volunteers touting various candidates and causes. By mid-afternoon, lines had cleared and voters could cast ballots relatively quickly.

Aaron Harrison of McLean saved himself some time by getting out of his car and walking his ballot down to a waiting volunteer, who was accepting ballots in a large storage bin.

Harrison was no fan of the ranked-choice system implemented by Republicans, calling it “nonsense” that left voters confused and losing candidates with an excuse to claim chicanery. Still, he filled out his ballot all the way from first choice to last, with Snyder first and de la Pena second.

Harrison said he's been involved in Republican politics a long time and remembers Snyder from his failed 2013 run for lieutenant governor. He said he has no doubts about Snyder's conservative credentials and appreciated his emphasis on reopening schools and businesses shuttered during the pandemic.

“The lockdown has become a religion for the left,” he said.

At a nearby polling district in Springfield for the 8th Congressional District, lines were significantly shorter. Voters were greeted by Doran and his Vizsla dog, Psyche, who sat comfortably in a large backpack.

Doran said he was impressed by the turnout and “excited to see the strength we have in the Republican Party.” He said dog lovers were especially excited to see Psyche campaigning with him and joked “he's got to be worth at least 5 points on the margins.”

Polling closed at 4 p.m. Saturday, but the party won't even begin counting ballots until Sunday. And when counting does begin, party spokesman John March said, the plan to start with the attorney general race and then the lieutenant governor contest before moving on to governor,

It may take several days to finish the count, which is complicated by the ranked-choice voting and proportional representation that is awarded each city and county.

Democrats will choose their gubernatorial nominee in a primary next month. Former Gov. Terry McAuliffe is the frontrunner among five Democrats.