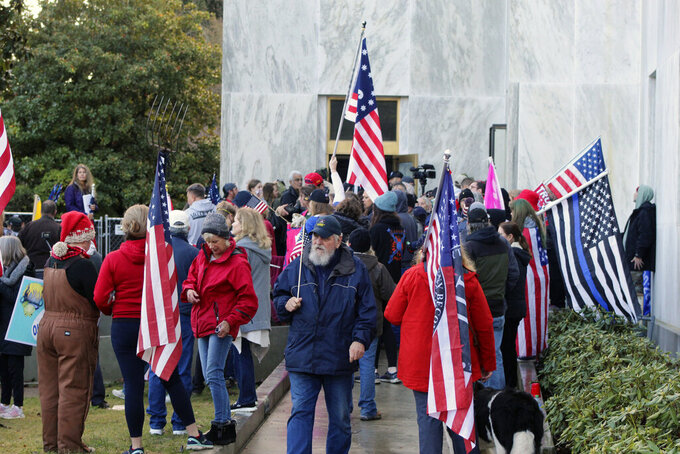 FILE - In this Dec. 21, 2020, file photo, pro-Trump and anti-mask demonstrators hold a rally outside the Oregon State Capitol as legislators meet for an emergency session in Salem, Ore. Prosecutors leveled two criminal charges Friday, April 30, 2021, against a Republican member of the Oregon House of Representatives who let far-right rioters into the state Capitol that day. Rep. Mike Nearman was charged with official misconduct in the first degree and criminal trespass in the second degree. (AP Photo/Andrew Selsky, File)

SALEM, Ore. (AP) — A Republican state lawmaker who authorities say let violent protesters into the Oregon Capitol in December says he is ill with COVID-19.

"I have a really bad case of COVID, and I’m kind of on the mend a little bit,” Rep. Mike Nearman said on a conservative radio talk show.

Another Republican lawmaker, who on the same day the Oregon Capitol was breached ripped off his mask on the Senate floor to protest coronavirus restrictions, says he has been absent from the Senate because his father tested positive for COVID-19.

Sen. Dallas Heard, who is also chairman of the Oregon Republican Party, told Senate leadership that he was exposed to the virus on April 25, that his father lives with him and that he must go into quarantine, the Salem Statesman Journal reported Friday.

Nearman faces a hearing Tuesday in Marion County Circuit Court on charges of official misconduct in the first degree and criminal trespass in the second degree for the Dec. 21 breach of the state Capitol by people protesting coronavirus restrictions. Both are misdemeanors, but they carry possible jail time.

Nearman said this week on the Lars Larson Show that he will seek a jury trial.

“The Oregon State Police spent over four months investigating me. ... Do you think these guys have anything better to do?” Nearman said.

Nearman, who is from the town of Independence near Salem, did not further discuss having COVID-19. On April 20, the Oregon House of Representatives canceled all floor sessions for that week after someone at the Capitol was diagnosed with COVID-19 and may have exposed people in the chamber.

Despite having gotten sick, Nearman told Larson that mask wearing, shutdowns and other edicts should be voluntary.

Safety restrictions like wearing masks, however, are not aimed only at protecting the wearer, but to prevent an infected person from spreading the virus.

The breach of the Oregon Capitol was a precursor to the Jan. 6 assault on the U.S. Capitol.

While lawmakers were meeting in emergency session inside the building in Salem to deal with economic fallout from the pandemic, flag-waving supporters of then-President Donald Trump, backers of the false Q-Anon conspiracy theory and anti-maskers were outside, demanding to be let in. The building was closed to the public to prevent spread of the coronavirus.

Nearman was seen on security cameras letting protesters in through a side door, where they were quickly confronted by police. Protesters attacked police with bear spray. Outside, some assaulted reporters and broke glass doors.

Nearman said he agreed with the radio host’s contention that the public is required by law and the state Constitution to be allowed in the building during a legislative session.

In January, after Nearman’s role became clear from the security footage, House Speaker Tina Kotek called for his resignation and stripped him of his committee assignments. She repeated the call after the Marion County district attorney filed criminal charges against Nearman on April 30.

“Rep. Nearman put every person in the Capitol in serious danger and created fear among Capitol staff and legislators,” Kotek tweeted.

Nearman's lawyer, Jason Short, asked the district attorney on Wednesday to produce the names of witnesses the state intends to call.