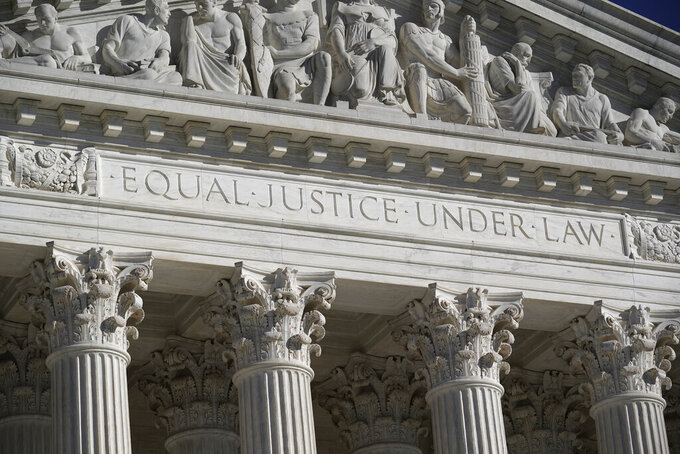 FILE - In this Nov. 4, 2020 file photo, the Supreme Court is seen in Washington. The Supreme Court’s latest rejection of a Republican effort to dismantle “Obamacare” is the latest sign that the GOP must look beyond repealing that law if it wants to hone the nation’s health care problems into a winning political issue. (AP Photo/J. Scott Applewhite, File)

WASHINGTON (AP) — The Supreme Court's latest rejection of a Republican effort to dismantle “Obamacare” signals anew that the GOP must look beyond repealing the law if it wants to hone the nation's health care problems into a winning political issue.

Those high court setbacks have been atop dozens of failed Republican repeal attempts in Congress. Most spectacularly, Sen. John McCain, R-Ariz., flashed a thumbs-down that doomed Trump's drive to erase the law in 2017.

Along with the public’s gradual but decisive acceptance of the statute, the court rulings and legislative defeats underscore that the law, passed in 2010 despite overwhelming GOP opposition, is probably safe. And it spotlights a remarkable progression of the measure from a political liability that cost Democrats House control just months after enactment to a widely accepted bedrock of the medical system, delivering care to what the government says is more than 30 million people.

“The Affordable Care Act remains the law of the land," President Joe Biden said, using the statute's more formal name, after the court ruled that Texas and other GOP-led states had no right to bring their lawsuit to federal court.

“It’s not as sacred or popular as Medicare or Medicaid, but it's here to stay," said Drew Altman, president of the nonpartisan Kaiser Family Foundation. “And it’s moved from an ideological whipping boy to a set of popular benefits that the public values.”

Highlighting the GOP's shifting health care focus, in interviews and written statements Thursday, more than a dozen Republican lawmakers called for controlling medical costs and other changes, but none suggested another run at repeal. Congressional Republicans hadn't even filed a legal brief supporting the latest Supreme Court challenge.

“Just practically speaking, you need 60 votes in a Republican Senate, a Republican president, right? And we've tried that and were unable to accomplish it," said Sen. Bill Cassidy, R-La., a leading voice on health care in the GOP.

Polling shows the risks in trying to demolish Obama's law. A Kaiser poll showed Americans about evenly divided on the law in December 2016, just after Trump was elected on a pledge to kill it. By February 2020, 54% had a favorable view while 39% disapproved.

House Minority Leader Kevin McCarthy, R-Calif., and other top Republicans issued a statement illustrating one line of attack the party is preparing — trying to handcuff all Democrats to “Medicare for All,” a costly plan for government-provided health care backed by progressives that goes beyond what Biden and many in the party have proposed.

Congress should “not double down on a failed health care law or, worse, move towards a one-size-fits-all, socialist system that takes away choice entirely," the Republicans said.

The GOP should focus on health issues people care about, like personalized care and promoting medical innovation, not repealing the health care law, said David Winston, a pollster and political adviser to congressional GOP leaders.

“Republicans need to lay out a clear direction of where the health care system should go," Winston said. “Don't look backward, look forward."

Most people have gained coverage from either Obama's expansion of the government-funded Medicaid program for lower-income people or from private health plans, for which federal subsidies help offset costs for many.

The law's most popular provisions also include its protections for people with preexisting medical conditions from higher insurance rates, allowing people up to age 26 to remain covered under their parents' plans and requiring insurers to cover services like pregnancy and mental health.

Key requirements like that are “locked in concrete,” said Joseph Antos, a health policy analyst at the conservative American Enterprise Institute. The political opening for Republicans would be if Democrats push hard for things like lowering the eligibility age for Medicare to 60 because for many conservative-leaning voters, he said, “that’s a sign of government pushing too far” into private marketplace decisions.

Nearly 29 million Americans remained uninsured in 2019, and millions more likely lost coverage at least temporarily when the COVID-19 pandemic hit, according to Kaiser. In addition, medical costs continue rising and even many covered by the law find their premiums and deductibles difficult to afford.

In response, Biden's $1.9 trillion COVID-19 relief package enacted in March expanded federal subsidies for health insurance premiums for those buying coverage. His infrastructure and jobs proposal being negotiated in Congress includes $200 billion toward making that permanent, instead of expiring in two years.

But his plan includes none of his more controversial campaign trail proposals to expand health care access, like creating a federally funded public health care option or letting Medicare directly negotiate drug prices with pharmaceutical companies. While those proposals are popular with Democratic voters, they face tough odds in a closely divided Congress.

Still, Republicans gearing up for 2022 elections that will decide congressional control must decide where their next focus will be.

One GOP strategist involved in House races, speaking on condition of anonymity to describe internal thinking, said the party should focus on issues like the economy and border security that register as higher voter concerns. A Gallup poll showed that in May, 21% of the public ranked the economy as the country's top problem, with health care registering at just 3%.

Other Republicans say the Supreme Court's rejection of the latest repeal attempt will clear the political field for them to refocus their health care attacks on Democrats.

“Now it's Medicare for All that will be a top health care issue playing a role in campaigns," said Chris Hartline, spokesperson for the National Republican Senatorial Committee, the Senate GOP's campaign arm.