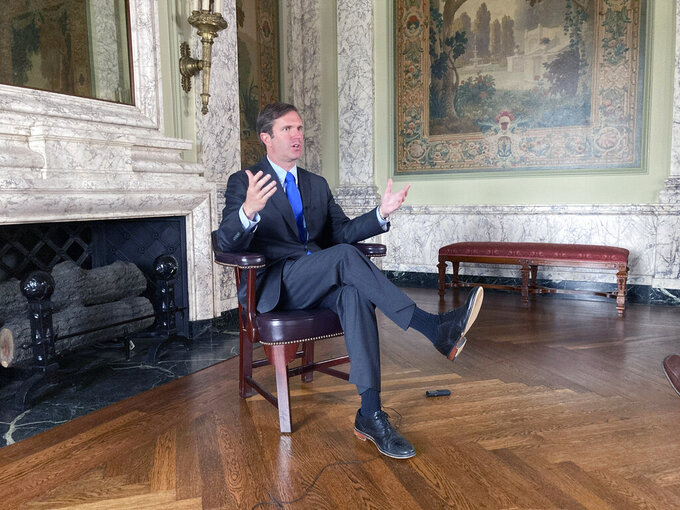 FRANKFORT, Ky. (AP) — Kentucky Gov. Andy Beshear on Friday declared his state’s deadly fight against COVID-19 a “success story” as he ended most pandemic restrictions, and said his state lessened the crisis because Kentuckians ultimately put science ahead of politics.

The Democratic governor, who confronted protests, lawsuits and impeachment petitions over his virus-related executive actions, expressed frustration that mask mandates meant to slow the virus' spread became a “question of liberty.”

Bringing the coronavirus under control required collective efforts of Democrats and Republicans, offering a lesson to move beyond the partisan strife that “can just be toxic,” Beshear said in an interview with The Associated Press, the first sitdown interview he's given in person in more than a year.

Shortly before announcing he was lifting capacity restrictions for restaurants, bars and other public venues, Beshear said the pandemic was “a test of our humanity” and posed “the single deadliest threat” of his lifetime. Kentucky's virus-related death toll has surpassed 7,000.

“When you look at our response, I think you see a success story and that’s obviously comparative and based on what could have happened," the governor said.

Kentucky “beat back” three surges of infection without having its hospitals overrun with virus patients, Beshear said. The rollout of vaccinations was “pretty successful,” with more than 2.1 million Kentuckians having received at least one dose of vaccine, he said.

“We know that our actions saved thousands, likely tens of thousands of lives,” he said later at his last media briefing focused on the “crisis phase of COVID in the commonwealth.”

Republican got in more digs at the governor as he was removing most remaining restrictions.

State Agriculture Commissioner Ryan Quarles said Beshear had governed by "executive fiat" throughout the pandemic, and that Kentucky's reopening lagged behind many other states. Quarles is a potential challenger to Beshear in 2023 when the governor has said he will seek a second term.

Beshear already has pivoted to focusing on job creation as the economy rebounds, but his handling of the pandemic will define his term, said Scott Jennings, a Kentuckian and former adviser to President George W. Bush. Republican lawmakers who control the state legislature accused the governor of cutting them out of pandemic decisions. Jennings said that “insular nature of his leadership led to some terribly arbitrary choices on school and business closures.”

The governor said he often had to choose between options that were “tough and tougher” in combating the virus’ spread, but added that he was consistent in "always siding with the science and in a way that protected the most Kentuckians as possible.”

During the interview, the first-term governor spoke in personal terms about the difficulties of leading the state through the public health crisis and the heartache and losses it caused.

“I’m the guy that has to try to lay my head down every night and sleep knowing that Kentuckians that we’ve lost, the grief that’s out there, the fact that so many couldn’t say goodbye and be at that bedside,” he said. "That we had thousands of Kentuckians die alone or with a nurse holding their hands. And so that perspective, each and every day, I never looked at any of this in any of the red or the blue discussion, and the rest of the country shouldn’t either.”

At his briefing, Beshear turned emotional in announcing the nine latest virus-related deaths. He read the age, gender and home county of each person, as he did throughout the pandemic.

Beshear has faced steady criticism and occasional protests over his actions. Armed protesters gathered near the governor’s home last year and then hanged Beshear in effigy in a tree near the state Capitol. The event was billed as a rally in defense of constitutional rights, including the right to bear arms, but turned into a protest against the governor’s virus restrictions.

Before he took action to largely lift the state's mask mandate Friday, Beshear vented his frustration with the divisions over donning a facial covering.

“Masks have been used to reduce infection in health care settings for decades," he said. “Yet somehow it became a question of liberty.”

He lifted the statewide mask mandate with a few exceptions, keeping the measure for such “high-risk settings” as public transit, health care settings and long-term care facilities.

Beshear became a fixture on statewide TV for more than a year, with press conferences where he announced the daily toll the pandemic had taken on Kentuckians. The governor said Friday that his decisions were guided by science, even when it incurred a backlash.

“To me, this wasn’t a red or a blue issue, it was a life and death issue," he said. "And I think every day through more than 250 press conferences over, what about 470 days from our first one to today, it was about the information, it was about the science and it was about our families.”