Green jackets fight back: Masters course 'where we want it.' 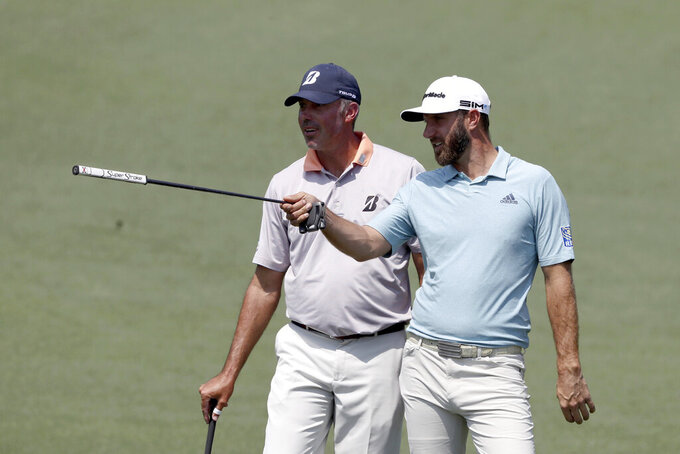 Dustin Johnson, right, and Matt Kuchar look over a shot on the second hole during a practice round for the Masters golf tournament at Augusta National Golf Club on Wednesday, April 7, 2021, in Augusta, Ga. (Curtis Compton/Atlanta Journal-Constitution via AP)

AUGUSTA, Ga. (AP) — The shortest championship reign in Masters history will end when Dustin Johnson steps onto the first tee.

The tournament has always been a how-low-can-you-go affair, but the pandemic-related shift to last November handed greater control of the course to Mother Nature, and man, was she ever kind to the players.

They’ve already found a very different Augusta National lying in wait this week, in large part because warmer spring temperatures helped tournament officials restore the fairways and greens to their usual fast and firm conditions. But whether those same green jackets cranked the dial up too far to avenge record low scoring by the champion —and just about everyone else — is a question that won’t be answered until Sunday, if ever.

“We don’t have any prescribed score,” club Chairman Fred Ridley said Wednesday. “The fact that Dustin was 20 under was a combination of his extraordinary play that at the same time, admittedly, the golf course was soft. ... I think the time of year combined with the wet conditions produced an extraordinarily soft golf course.

“But that,” he added a moment later, “really had nothing to do with the way the golf course is playing right now.”

Fred Couples, the 1992 champion, will be in the field again, but at age 61 conceded he doesn’t expect to be in the hunt. Instead, he’ll get his kicks watching the younger generation wrestle with a course playing faster at this point than all but a handful of times over the course of his previous 35 appearances.

“As a guy watching, I want to see these guys play it as hard as it possibly can.

"They’re not concrete yet,” Couples chuckled, referring to the greens, “but they’re brown and they’re going to get there fast — which, look out.”

Not surprising, the early betting line closely tracks the world ranking, with Johnson topping both. His 268 here — Johnson's second major championship win — was two shots better than the record shared by Tiger Woods and Jordan Spieth, and five better than the field. He’s already notched one win, at the Saudi International, in six starts this year and described his game on arrival “in good shape."

“Maybe not quite as good of shape as it was in November,” Johnson quickly added, “but I feel like it’s coming together. I’m starting to hit a lot of the same shots and getting a lot more comfortable over the golf ball.”

Whether there’s any carryover from November’s tournament has been debated during the practice rounds. But most of the talk has centered on how several greens — most notably the par-5 15th — are already tossing off approach shots like so many scorned suitors.

Johnson’s toughest competition is expected to come from a handful of challengers with at least one major championship already on the resume: a resurgent Spieth; muscled-up Bryson DeChambeau; recent Players champion Justin Thomas; a still-struggling McIlroy; emerging Collin Morikawa; and big-game Brooks Koepka.

Among those contenders still looking for their first career-defining win are Jon Rahm, who welcomed his first child last weekend; Patrick Cantlay; Viktor Hovland; and Xander Schauffele. The chances of anyone else running that gauntlet begin at 40-1 and climb into triple-digits in a hurry.

Speaking of predictions, more than a few golfers are expecting the winning number to wind up much closer to par than Johnson’s paint-by-the-numbers master(s)piece. Even more concerning to tournament officials, however, may have been the records busted by the field: a record-low 71.75 average score (par is 72), with more than half of the 302 rounds completed recorded in red.

“In the past, we might have started out a little soft and then got firmer as the week went on and vice versa,” Ridley said. “Last year we were pretty soft all week. I think we have the golf course where we want it.”

Where that might be is anyone’s guess. The green jackets in charge are notoriously circumspect about everything Masters-related, including apparently which of the several sandwiches sold on the grounds — pimento cheese, pulled pork and egg salad among others at reasonably low prices — is the best.

“Well, I like them all,” Ridley said, dodging yet one more inquiry,” but I try to stay away.”