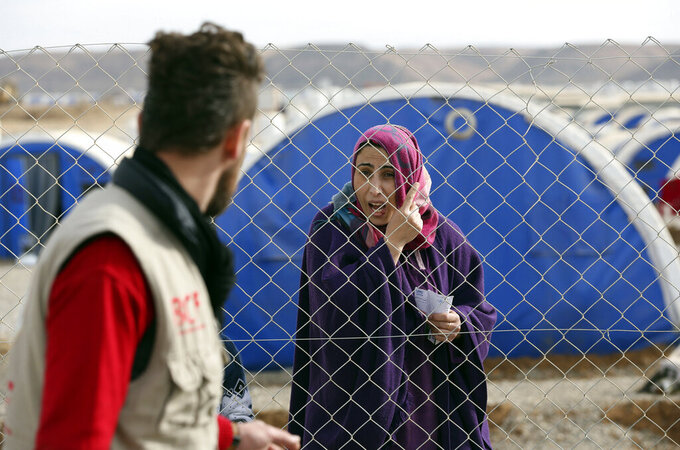 FILE - In this Dec. 5, 2016 file photo, an Iraqi woman who fled the fighting between Iraqi security forces and Islamic State militants waits for humanitarian aid at a camp for internally displaced people, in Khazir, near Mosul, Iraq. A new report released Monday, May 11, 2020, by the Norwegian Refugee Council found that internally displaced women will face more obstacles returning home than men after nearly three years of languishing in camps since the end of the war against the Islamic State. At least 11 % of women, the report says, will face barriers hindering their return including tribal conflicts and militia presence. (AP Photo/Hadi Mizban, File)

BAGHDAD (AP) — Hundreds of thousands of Iraqi women who fled war and conflict are facing systemic inequalities in their fight to return to their homes, a rights report published Monday revealed about Iraq's internally displaced population.

The Norwegian Refugee Council's findings show that up to 11% of Iraq's female internally displaced population are facing barriers that include the inability to access property, establish ownership and seek compensation for homes damaged during the war against the Islamic State.

Sabaha Ahmad, 73, is one of thousands of internally displaced Iraqi women who say they are facing discriminatory practices as Iraq seeks to recover from years of conflict.

Speaking with The Associated Press, she said she was unable to return home because of long-standing tribal disputes since the war against the Islamic State. Instead, she has spent nearly four years in camps for the internally displaced in Iraq’s northern Kurdish region.

Ahmad has not stepped foot in her home in Shirqat, a Sunni Arab district in northern Salahadin province, since late 2016 when it was liberated from IS by Iraqi security forces.

“I can’t go back home to Shirqat because the tribe has banished us from the area,” she said. “One of them accused my son of being an IS member, but this isn’t true. It was because they wanted our land.”

According to the NRC, 9% of women surveyed in the provinces of Dohuk, Ninewa, Kirkuk and Anbar said their property was being occupied by relatives, local tribal leaders, militias and security forces, impeding their return.

The report, which was based on a survey of 1,002 people, found that even the slightest suspicion of IS affiliation had denied women the ability to prove property ownership, “even if they possess official documents,” the report said.

Measures imposed by the government to contain the spread of the novel coronavirus, including shutting down courts and legal services, have also prevented internally displaced women from seeking legal recourse to solve ongoing property disputes, the report added.

At least 110 people have died among 2,818 confirmed cases of the virus, according to figures from the Iraqi Health Ministry.

Iraqi laws guarantee women’s property rights, but local traditions and tribal customs have put obstacles in the way of internally displaced women from realizing those rights, according to the report.

Ahmed said her attempts to appeal to tribal leaders were to no avail and she felt that she was out of options.

“I worry for my grandchildren,” she said, speaking from her tent surrounded by her family at the Khazir camp where she is living.