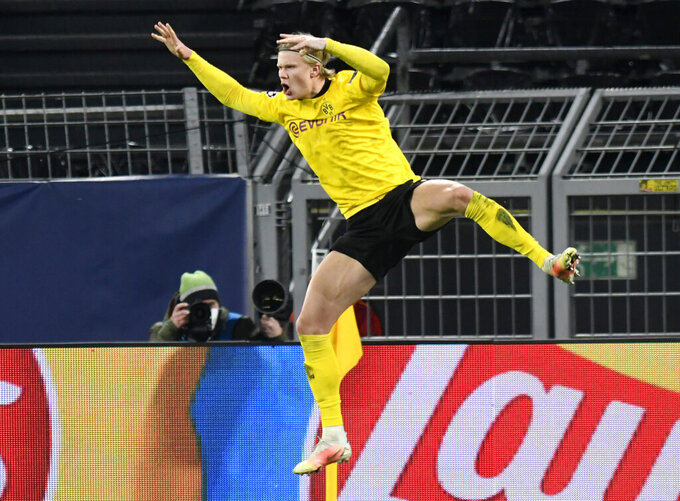 By sending Borussia Dortmund into the Champions League quarterfinals, Erling Haaland offered another reminder this week of why he is one of European soccer's most sought-after transfer targets.

Where he'll be playing next season is anyone's guess.

In any normal season, Haaland would have his pick of transfer offers from Europe's big clubs, especially when Dortmund is in danger of missing out on Champions League qualification next season. The Norwegian striker is still only 20 but has shown he can score goals against almost any opposition. His two strikes against Sevilla on Tuesday made him the youngest player ever to reach 20 goals in the Champions League.

He also needed no time to adapt to his new surroundings after his last transfer from Salzburg in January 2020.

The coronavirus pandemic changes all that, though. The already small market for the world's very best players has shrunk even further as the pandemic hammers club finances. Barcelona's debt crisis is a cautionary tale for other clubs on the dangers of overspending.

With its appetite for signing the world's biggest names, Real Madrid might seem an obvious destination, especially given how heavily it's leaned on 33-year-old striker Karim Benzema this season. But Madrid is also under financial strain and, even if it can gather funds for a signature transfer, might pursue Paris Saint-Germain's Kylian Mbappé or Liverpool's Mohamed Salah instead. Zidane praised Haaland and Mbappé as “players of the present and future” last month.

Haaland and his advisers will be aware of what happened the last time Madrid signed an up-and-coming striker from the Bundesliga. Less than two years after his move to Spain for 60 million euros ($72 million), Luka Jovic is back on loan at his old club Eintracht Frankfurt.

Bayern Munich and PSG have the money but couldn't promise Haaland he'd be first choice. Keeping Neymar, Mbappé and Mauro Icardi happy is tough enough already for PSG, unless one or more of them departs, and Bayern's Robert Lewandowski is 32 but in the form of his life, with 31 goals in 23 league games this season.

“Many, many things are possible in life, and you can never rule anything out,” Bayern coach Hansi Flick told German broadcaster Sky when asked about Haaland last week.

Haaland was born in England when his father Alf-Inge played there, and as a 16-year-old he told Norwegian newspaper Aftenposten that his dream was to win the Premier League with Leeds. But despite being back in the Premier League this season after a 16-year absence, Leeds hardly has the money to pay the kind of transfer fee that Haaland will require.

Manchester United would be an obvious option, reuniting Haaland with Ole Gunnar Solskjaer, who coached him as a teenager in Norway. Haaland's goals against Sevilla also broke Solskjaer's record as the top Norwegian scorer in the Champions League.

“I think when you have had kids and players through as a coach, you follow them, of course, and I keep in touch with Erling," Solskjaer said last month. “He’s a Dortmund player. We just wish him well there and then let’s see what life will bring later on.”

The one problem for Solskjaer is Haaland's fondness for Leeds and Manchester City, two of his dad's old clubs, and two of United's fiercest rivals. Liverpool may not be an option unless the club has the money and squad space from selling one or more of its current first-choice forwards. City is running is away with the Premier League title and may be reluctant to change a winning recipe.

The next chance for Haaland to impress is Saturday, when Dortmund hosts out-of-sorts Hertha Berlin. The gap to the Champions League places is still just four points and could change quickly if surprise contenders like Eintracht Frankfurt or Wolfsburg drop out of form. Lewandowski continues his pursuit of Gerd Müller's 49-year-old league scoring record of 40 goals when Bayern visits Werder Bremen on Sunday. Second-place Leipzig hosts Frankfurt on Sunday.