Halfway through NFL season, uncertainty reigns off the field 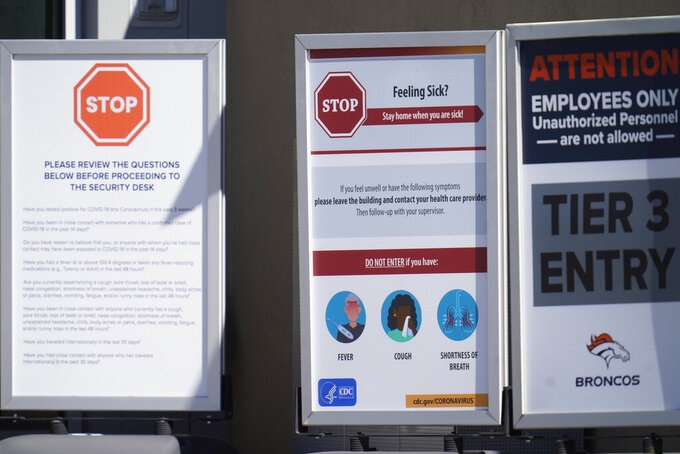 FILE - In this Oct. 28, 2020, file photo, signs about COVID-19 stand outside a door to enter the Pat Bowlen Fieldhouse during an NFL football practice at the headquarters of the Denver Broncos in Englewood, Colo. The pandemic has determined much of what we've seen thus far, and almost certainly will continue to with the predicted spikes in the coronavirus as the calendar heads toward winter. (AP Photo/David Zalubowski, File)

From the unbeaten Steelers at the top to the winless Jets at the bottom, predictability has taken a hike halfway through NFL 2020.

We can discuss the magnificence of Russell Wilson and Patrick Mahomes, of Aaron Donald and T.J. Watt. We can laud the legwork of Justin Tucker and Jason Sanders, and brag about the brilliant coaching of Brian Flores and Kliff Kingsbury in bringing previous also-rans to playoff contention.

The overriding fact, however, is that the pandemic has determined much of what we've seen thus far, and almost certainly will continue to with the predicted spikes in the coronavirus as the calendar heads toward winter.

Everyone would love to turn attention to the on-field product — well, maybe not Jets fans, though even their team's hapless start is beyond what their followers' most pessimistic projections could have come up with. Of course, “Tanking for Trevor” doesn't seem so farfetched these days, does it?

But having already seen significant readjustments of the schedule because of COVID-19 outbreaks, plus key people missing games because of the virus, well, the daily questions have become not how is a player performing, but how is he feeling?

“You got to make sure that you’re doing the right thing so you can be healthy for your team, and your team’s able to play week after week," says standout running back Derrick Henry, whose Titans had the major outbreak of COVID-19 during the first half of the season. “... it’s a crazy time right now and every day I say a prayer for this team and for every player on every team around the league. Everybody has families and things like that. This is a serious disease and pray that everybody can stay healthy, but we’re all grown men and you’ve got to be careful.”

Uncertainty about what’s ahead for November and December, not to mention for the playoffs and Super Bowl during an ongoing pandemic, could overshadow the on-field product.

And that product has been offensive — in a good way. Through nine weeks, 2020 marks the highest-scoring season in NFL history: 6,737 points, 778 total touchdowns and 745 offensive touchdowns (passing and rushing combined), all the most at this point in a schedule. There's been an average of 50.7 points scored per game, the most through Week 9 since 1970.

The pandemic hasn't drawn attention away from the ever-expanding injured reserve collection because so many big names have landed on that list.

It began in preseason with Denver linebacker Von Miller (ankle), and has not slowed. Blaming the lack of offseason and preseason in-person preparation could account for some of the injuries, particularly soft tissue problems such as hamstrings. But the stream of stars sidelined has been dizzying.

Hey, even the kickers have gotten into the injury act, with Jacksonville seemingly using someone new every week.

The way injuries have destroyed the 49ers is a shame, because otherwise all four NFC West teams had a shot at the expanded playoff field. Last week was a bad one for the division, losing three times (the Rams were on a bye), but there's no denying the base of NFC power is out west.

“It’s exciting to see the division come back around like this,” Seahawks coach Pete Carroll says. “We’ve seen it go kind of up and down over the years, and it always seems to keep coming back strong, and we’re strong again — everybody can play football."

Among the difficult realities of 2020 is this: Barring a stunning turnaround, the winner of the NFC Least, uh, East will have a losing record. Probably deservedly so.

The NFL likely wouldn't mind simply dropping this sector from the standings it posts. Philadelphia, among the most undermanned clubs because of injuries, is on top at 3-4-1, followed by Dallas (2-6), Washington and the New York Giants, both 2-7.

Yet any of these pretenders could limp off with the division crown. The secret seems to be winning within the division because they are a total of 2-10 outside the NFC East.

So Tom Brady is 6-3 and seemingly headed for the playoffs in his first season in Tampa. Meanwhile, the franchise he led to six Super Bowl titles in two decades at quarterback, the Patriots, are 3-5 under the coach Brady left behind, Bill Belichick. The Patriots went to the limit to beat the aforementioned abysmal Jets on Monday night.

Heading into April's draft, the spotlight was on Joe Burrow, Tua Tagovailoa and Justin Herbert. Rightfully so, it appears. Burrow has the Bengals on the rise, Herbert has been outstanding despite the Chargers' inability to finish games, and Tagovailoa is 2-0 as a starter.

Arizona's Kyler Murray and Buffalo's Josh Allen have been excellent. And don't forget that Patrick Mahomes (25) and Lamar Jackson (23), the two most recent league MVPs, aren't exactly in Brady's age range. Or generation.