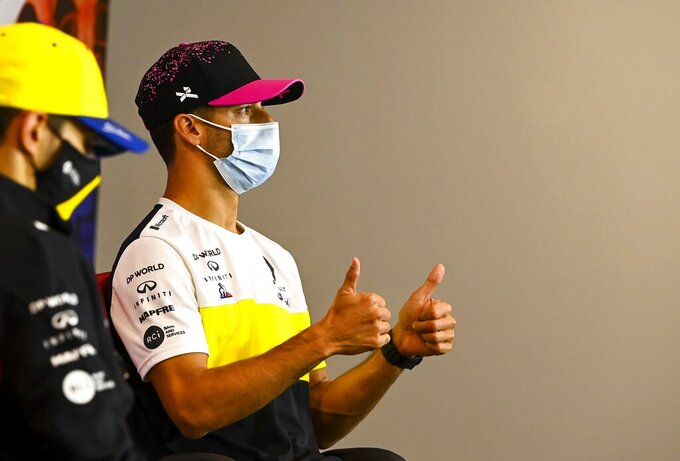 Renault driver Daniel Ricciardo of Australia gestures as he attends the press conference in the build-up to the 70th Anniversary Formula One Grand Prix at the Silverstone circuit, Silverstone, England, Thursday, Aug. 6, 2020.(Mark Sutton/Pool via AP) 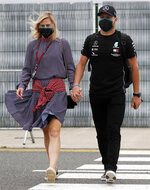 SILVERSTONE, England (AP) — Lewis Hamilton feels uncomfortable negotiating with Mercedes over a lucrative new deal as the world struggles during the coronavirus pandemic.

The Formula One world champion's contract is up for renewal in five months’ time.

“Honestly, it doesn’t feel like the right time to sit down and talk about it,” said Hamilton, who heads into the 70th Anniversary Grand Prix at Silverstone on Sunday with a 30-point lead over teammate Valtteri Bottas in the championship.

“When you think about so many people in the world who have lost their jobs and people who are now unemployed, to sit down and negotiate a big contract doesn’t feel like the most important thing that I need to apply time to at this second. I don’t feel comfortable about it so I am going to wait a little bit longer.”

There are two consecutive weekends of racing at Silverstone as F1 tries to pack in races following the pandemic-delayed start to the season. This Sunday's event is being called the 70th Anniversary GP to mark the sport's landmark year.

Mercedes announced Thursday that Bottas will be retained for a fifth season. Given Mercedes’ imperious dominance, the Finn is providing the sole challenge to Hamilton.

Hamilton is on course to match Michael Schumacher’s record haul of seven world championships this season.

“I do want to continue with this team and it is not a big effort for us to sit down and get it done,” the 35-year-old Hamilton said. “I am not talking to anyone else. I am looking forward to continuing, particularly as we have just started a new chapter of how we educate ourselves and how we understand what we are going to do in terms of being more diverse and more inclusive. I am super excited with what is possible with Mercedes and this team moving forward. It will get done at some stage, so I am not stressed.”