Happy to be playing, Matsuyama tries to cap year with gold 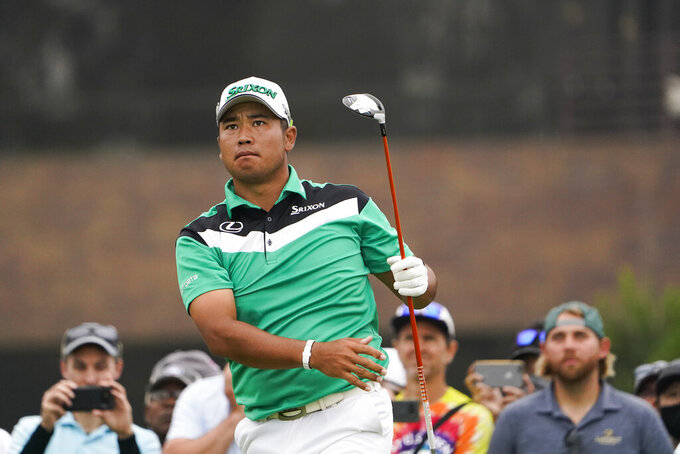 FILE - In this June 18, 2021, file photo, Hideki Matsuyama, of Japan, watches his shot during the second round of the U.S. Open Golf Championship at Torrey Pines Golf Course in San Diego. Matsuyama spent 10 days recovering from the coronavirus leading up to the Olympics in his native Japan. (AP Photo/Jae C. Hong, File)

KAWAGOE, Japan (AP) — Somewhere between bringing a Masters green jacket home to Japan and trying to give the host nation an Olympic gold medal in golf, Hideki Matsuyama began to wonder if he would even get the chance to play.

A month before the opening round, Matsuyama tested positive for the coronavirus.

He went 10 days without hitting a shot during his self-isolation. More troublesome were the subsequent tests that kept coming back positive, even though he was asymptomatic. That led him to withdraw from the British Open, missing a major for the first time in eight years.

“I wasn't really sure if I'd be able to make it to the stage here,” Matsuyama said Tuesday. “So finally, I'm here. And I'm very happy to be able to be here.”

The attention is as great as ever.

Already considered Japan's greatest player since the days of Jumbo Ozaki, the 29-year-old Matsuyama delivered a prize as good as gold when he won the Masters in April, making him the first Japanese man to win a major.

The timing couldn't have been more appropriate with the pandemic-delayed Olympics coming to his home country. The spotlight is as bright as ever.

Mackenzie Hughes of Canada knows what it's like to have a golf-crazed country in his corner wherever he plays, and he could only shake his head when asked what it will be like for Matsuyama this week, even without spectators.

“I'm not sure you could ever relate to what he goes through,” Hughes said. “Not even just here, but week in, week out on the PGA Tour, we see the throngs of Japanese media that follow him wherever he goes. It's quite impressive to do what he does and play as well as he does with a microscope on him all the time.”

In some respects, the Masters might have eased some of that burden. Matsuyama tried to get in front of it last month at the U.S. Open when he said the four majors remain the biggest prizes in golf, and he has arguably the biggest of the year.

He hasn't finished a tournament since the U.S. Open on June 20 because of the COVID-19 diagnosis, and he wasn't in the best of form before that. In the four times he played since winning the Masters, he hasn't finished in the top 20.

“Since my Masters win, I haven't had the best results so far this summer, so I'm a little bit nervous,” Matsuyama said. “But I'm really looking forward to it. I think it's going to be really fun, and I'm going to try to do my best to play well.”

He is coming back to a good spot.

Kasumigaseki Country Club, the tree-lined course about a 90-minute drive northwest of downtown Tokyo, is in mint conditions without any traffic in nearly three months. And while it's new to most of the 60-man field, it holds nothing but good memories for Matsuyama.

It was 11 years ago when Matsuyama won the Asia-Pacific Amateur at Kasumigaseki, which earned him a spot in the Masters.

That was just a start. Matsuyama won his first Japan Golf Tour event while still in college, and when he turned pro in 2013, he won four times to capture the Japan money title.

“So in a way, Kasumigaseki has been a place and catalyst for me to progress and grow,” he said. “So hopefully, I could do the same this week and move on to another level.”

The 60-man Olympic field is stronger than it was for Rio de Janeiro in 2016, when golf returned after a 112-year absence and the top players stayed away, most citing the Zika virus.

Golf lost two of its top players, Jon Rahm and Bryson DeChambeau, to positive COVID-19 tests. It still has 12 of the top 30 in the world, a good representation considering Americans occupy 17 of those spots and no country is allowed more than four players. Even so, winning any medal is as difficult and unpredictable as most other tournaments.

For Matsuyama, it's a question of whether it's tougher or more enjoyable for a hometown hero, even without spectators lining the fairways.

Abraham Ancer only knows the loud version. He played with Tiger Woods at a World Golf Championship in his native Mexico two years ago, as nervous as he's ever been, two days of stress and memories and lessons on how to cope with pressure.

“And Hideki being from here, just winning the Masters ... it's going to be really cool to play an Olympics in your home country,” Ancer said. “I wish we had some people watching us, but still it will be really, really cool.”