Harrison, now a mother of 2, fights for $1M PFL championship 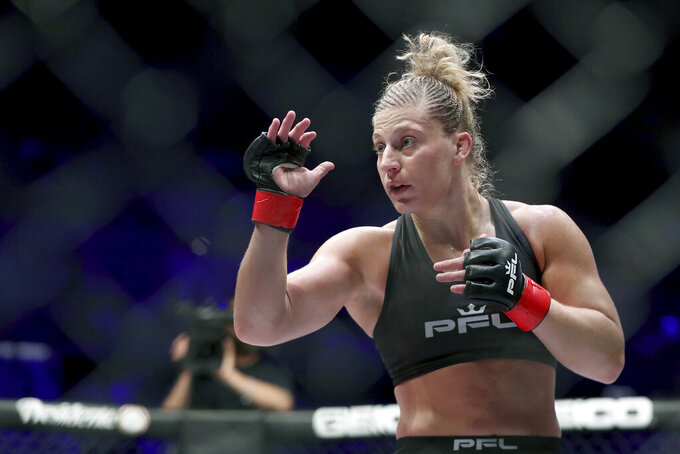 FILE - Kayla Harrison is shown during a PFL (Professional Fighters League) bout against Larissa Pacheco at Nassau Coliseum in Uniondale, N.Y., in this Thursday, May 9, 2019, file photo. Two-time Olympic gold medalist Kayla Harrison tries for another $1 million prize when she fights Taylor Guardado in the main event of the 2021 PFL Championships this week in Florida. (AP Photo/Greg Payan, File)

Her biggest reward, in an adulthood full of professional triumphs, is from earlier this month: a moment captured on Instagram by the 31-year-old Harrison where she hugged daughter Kyla after her adoption became official, a day the MMA star called “ the best day of my life, by far.”

More best days were on the horizon: Harrison just finalized the adoption of her son, Emery.

“YOU GUYS IM A MOM OF TWO!!!” she posted Monday on Instagram.

Somewhere in the middle of adoption ceremonies, family days at the beach and planning a birthday party for her 3-year-old boy, Harrison keeps doing what she does best — winning fights in PFL and proving she’s one of the fiercest fighters in MMA.

“I want to instill my will,” she said.

Harrison (11-0) has fought three times already since May because of the PFL’s season format and a win Wednesday on ESPN against Taylor Guardado (3-1-1) would give her another 155-pound championship and a second career $1 million prize.

Her family life largely settled, Harrison’s professional future is in limbo with her PFL deal set to expire and questions raised about where she’ll fight next. Undefeated, yes. Untested? Well, the PFL women’s division certainly isn’t as stout as UFC, or even Bellator, where a potential big-money bout with Cris Cyborg could be in the cards. PFL, though, is the only major MMA promotion with a 155-pound women’s division and it may be in Harrison’s best interest to fight another year for big money for the company and drop a weight class — all to get her ready for a peak free-agent year in 2022.

With a big decision ahead, Harrison said “she’s not even thinking” about 2022 and beyond.

But, if PFL isn’t willing to pay its face of the promotion what Harrison feels she’s worth, “then I have no doubt I’ll probably be the highest-paid free agent in the history of MMA.”

That’s a bold statement, even from a fighter who hasn’t needed to go beyond the first round seven times since her PFL debut in 2018.

Her unbeaten streak in all forms stretches to 2016. No U.S. judoka — man or woman — had ever won Olympic gold before Harrison beat Britain’s Gemma Gibbons to capture the women’s 78-kilogram-and-under division at the 2012 Olympics in London. She won gold again four years later at the Rio de Janeiro Games.

Harrison has been open about the years of physical and mental abuse inflicted by a former coach leading into the Olympics and she wrote a book about recognizing and overcoming the trauma. Through it all, Harrison said her faith has steadied her along the way.

“I just have come to the understanding and realization that some stuff you just have to give to God,” she said. “Some stuff you’re not going to be able to fix or solve or change, and you’re just going to really have that faith that it will all work out.”

Tragedy struck in late 2019 when Harrison’s mother had a stroke and her stepfather died months later, leaving Harrison’s young niece and nephew without a guardian (her sister was out of the picture).

Harrison became an instant caretaker — and now, a mother.

Harrison is part of a Sunday Bible group at her church in Coral Springs, Florida, and they study Ecclesiastes and discuss the difficulty at times in keeping the faith through severe moments of doubt.

“Everyone was kind of sitting there and they all had this peace and they were like, God is good all the time,” she said. “I have no doubt they all have struggles in their lives. It was toward the end and I was like, I don’t know about all of you, but this is really hard. I struggle with this every day. They’re like, no matter what, God’s got me. I’m like, what if I die? What happens to my kids? I know you’re saying God’s got this. But I’m literally their last hope. If I die, what happens to them? If I lose my fight? What happens? I understand we have to have this faith and we have to understand nothing matters but God, but I really struggle with it.”

She’s a fan of motivational speaker Tony Robbins and would love to share her inspirational story at one of his self-help seminars. Her message is a simple one:

“I have faith that God is moving in my life and doing things that I can’t even see,” she said, “but the results are going to be worth it.”

Yes, that includes her 2022 fight promotion, but thoughts of signing with PFL or UFC are for another day. Up first is a championship fight and then plans to unwind with a party celebrating her kids and her career. She can afford the bash.

“I probably will have another million bucks in my back pocket,” she said, laughing.