Holiday may be piece to a 2nd basketball championship puzzle 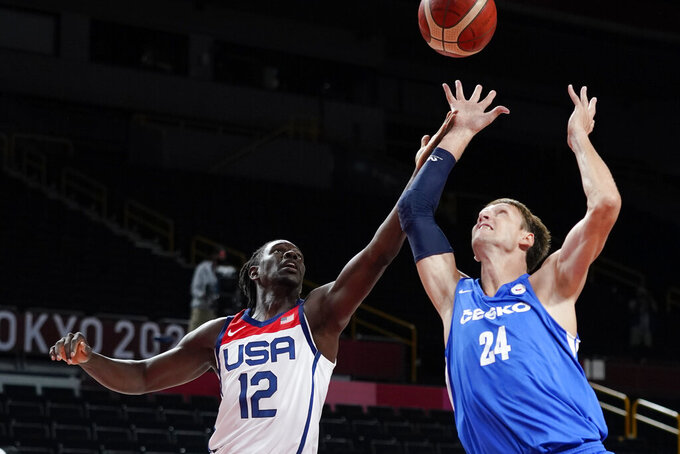 United States's Jrue Holiday (12) fights for a rebound with the Czech Republic's Jan Vesely (24) during a men's basketball preliminary round game at the 2020 Summer Olympics, Saturday, July 31, 2021, in Saitama, Japan. (AP Photo/Charlie Neibergall)

SAITAMA, Japan (AP) — Jrue Holiday has already had gold in his grasp.

It belongs to his wife, Lauren, who won two gold medals as a member of the U.S. women's soccer team. The latter was in 2012, when Holiday went to London to cheer her on.

“I’ve actually held them, so I don’t know if that’s bad luck or bad Juju or whatever, but they’re beautiful,” Holiday said.

Now the guard for the U.S. men's basketball team is in position to have two pieces of championship hardware of his own.

Just two weeks after helping the Milwaukee Bucks win the NBA title, he will try to help the U.S. move closer to a fourth straight Olympic gold medal when it faces Spain on Tuesday in a quarterfinal matchup.

And if the Americans do win again, a big reason will be because Holiday was once again the final piece to a championship puzzle.

Not that he's had much time to ponder that with his summer schedule.

“I feel like I haven’t slept for the last two or three months,” Holiday said.

The Bucks had the NBA's best record in two straight seasons, but didn't become a title team until they acquired Holiday from New Orleans before this season.

There was no indication the Americans could be on top of the world until Holiday joined them.

He was playing in the NBA Finals when they lost their first two exhibition games in Las Vegas and only a couple days removed from Milwaukee's victory celebration when he arrived in Tokyo along with Bucks teammate Khris Middleton and Phoenix's Devin Booker.

Despite not even having 24 hours with the team, Holiday was the Americans' best player in their 83-76 loss to France in their opener with 18 points and seven rebounds. He was moved into the starting lineup after that for easy victories over Iran and the Czech Republic.

“He’s, in a way, kind of like the meanest man in the valley, but you’d never know it because of his quiet demeanor, his kindness,” U.S. coach Gregg Popovich said. “But he’s an all-around wonderful human being. And his entry to the team, late as it was, has had an immediate effect, because he garners so much respect from his teammates.”

Perhaps more importantly, Holiday provides the Americans so much of what they were missing on the court.

A team that was once so deep at the position that it could bring Chris Paul and Deron Williams off the bench behind Jason Kidd in 2008 had no natural point guard until Holiday arrived. Damian Lillard was playing the position, but his strength is as a scorer creating offense for himself, not his teammates.

Lillard shot just 3 for 10 in the opener but bounced back with 21 points on seven 3-pointers against Iran after Holiday joined him in the starting lineup.

Holiday describes himself like a complementary player, someone willing to rebound or create shots for others. His best skill is probably his defense and it's the one that might be most important to the U.S. now.

The Americans may have to play against Spain's Ricky Rubio, Australia's Patty Mills and Slovenia's Luka Doncic, the three highest-scoring guards in the tournament, if they are to win gold.

“Having him, he’s probably the best perimeter defender we have in the NBA,” U.S. guard Zach LaVine said, "and you have him on the team and we’ve got a bunch of guys to help him as well, myself included, trying to take on that role, being able to go out there try to help guard guys.

“But having Jrue out there, you can't get much better than that on the perimeter.”

The ability to defend the opponent's best backcourt scorer is one of the reasons the Bucks wanted Holiday and his performance during the season was good enough to earn him All-Defensive first team honors for the second time. He then made one of the most significant stops of the season in Game 5 of the NBA Finals, when he stole the ball from Booker as the Bucks were protecting a one-point lead in the closing seconds.

He leads the Americans in steals now, noting that he can be even more aggressive with the physical nature of international basketball. He's also second in rebounds while averaging 12.3 points and making 54% of his 3-pointers.

Holiday is three wins from joining the list of players that have won an NBA title and Olympic gold in the same year, a group that includes Michael Jordan and LeBron James.

He was deep in the quest for the NBA ring when he got the invitation to play for the U.S., one he always hoped would come.

“I definitely wanted to be a part of the USA team and win the gold medal," Holiday said. ”It’s late in my career, so me making it now has been awesome and I’m super excited about it."