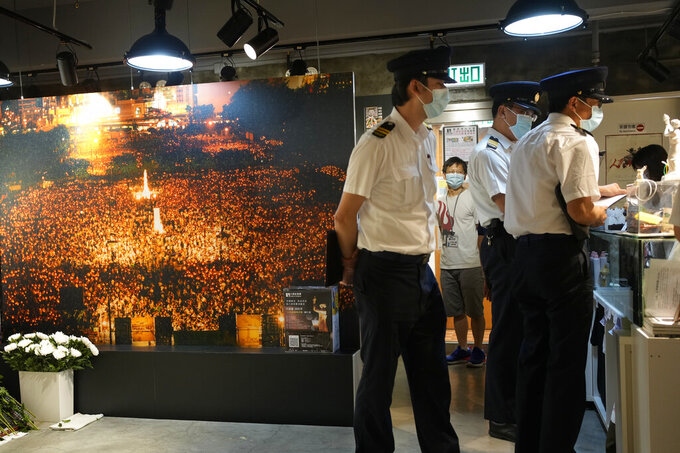 Officers from Food and Environmental Hygiene Department ask questions to staff next to a huge photo of candlelight vigil at the "June 4 Memorial Museum" run by The Hong Kong Alliance in Support of Patriotic Democratic Movements of China in Hong Kong Tuesday, June 1, 2021. The Hong Kong museum commemorating the bloody crackdown in Tiananmen Square in 1989 has been shut down days after its opening, as authorities continue to crack down on activities related to the event. The museum, which opened on Sunday and was meant to last until June 4, was closed on Wednesday by the organizers after authorities investigated the venue for not having the relevant licenses required for public exhibition. (AP Photo/Vincent Yu)

Hong Kong was the last place on Chinese soil where the party's attack on protests centered on Beijing's Tiananmen Square was commemorated with candlelight vigils and other events. But authorities have banned public ceremonies for the second year amid a campaign by Beijing to crush pro-democracy activism in the territory.

Organizers of the June 4 Museum said it closed after authorities investigated whether it had licenses to conduct public exhibitions. The Hong Kong Alliance of Patriotic Democratic Movements of China said it wanted to protect staff and visitors while the group sought legal advice.

Public memorials have long been banned on the mainland. Relatives of people who were killed in the crackdown often are detained or harassed by authorities ahead of the anniversary.

The group, which has organized candlelight vigils in Hong Kong in past years that attracted thousands of people, said the museum received more than 550 visitors since it opened Sunday.

Beijing is tightening control over Hong Kong, prompting complaints it is eroding the autonomy promised when the former British colony returned to China in 1997 and hurting its status as a financial center. Pro-democracy activists have been sentenced to prison under a national security law imposed following anti-government protests that began in 2019.

Critics say authorities use the pandemic as an excuse to silence pro-democracy voices in Hong Kong.

Last year, thousands gathered in Victoria Park despite the ban and police warnings. Weeks later, more than 20 activists who took part in the vigil were arrested. This year, organizers have urged residents to mark June 4 by lighting a candle wherever they are.